You Go Girl: Why Traveling to Atlantic City during COVID Felt Safer Than Staying Home 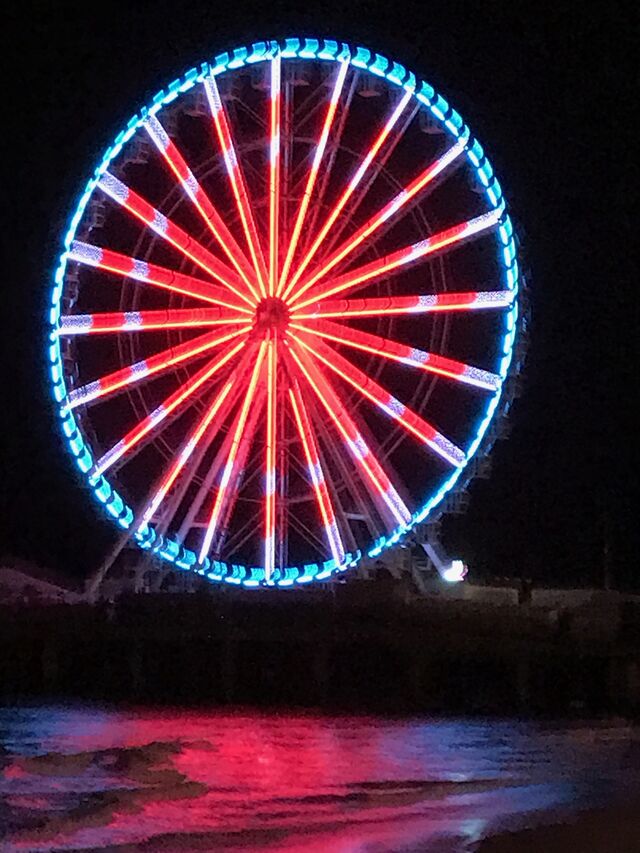 I have to admit, before this year, I always kind of took Atlantic City, NJ, for granted. Las Vegas’ grungier, East Coast counterpart, this seaside vacation town is where my grandparents on both sides all spent their humble honeymoons and was the setting for a seedy 1980 crime drama starring Susan Sarandon. But a recent visit to the shiny, new Hard Rock Hotel & Casino—a miraculous re-build over the remains of Donald Trump’s dismal Taj Mahal—really opened my eyes to what safe travel can look like in the COVID era while reminding me that “Work From Home” can really mean “Work From Anywhere.”

By the time I made it to the Hard Rock with my guy, I was in pretty rough shape. As someone at higher risk for COVID, I had been living as a virtual prisoner in my tiny East Village N.Y.C. apartment for the past six months. Whenever I tried to venture out for a little sun or a nice walk, I was scared back inside by streets crowded with maskless partiers with To-Go cups of cocktails; sick, displaced folks in hospital gowns doing hard drugs in front of boarded up businesses; and even a parade of maskless strangers from NYU heavily laden with beer making their may to my roof for a clandestine party. It just didn’t seem worth it to even try anymore. My skin turned gray, there were dark circles under my worried eyes, and the health risks of living like veal were beginning to compete with the dangers of the virus.

So when I was invited to Hard Rock’s Atlantic City location to check out the new Safe + Sound protocols being put into place at all of their destinations worldwide, the idea of spending a few days with plenty of uncrowded outdoor space and indoor areas being maintained in strict accordance with CDC guidelines sounded literally like a breath of fresh air. I couldn’t get there fast enough. 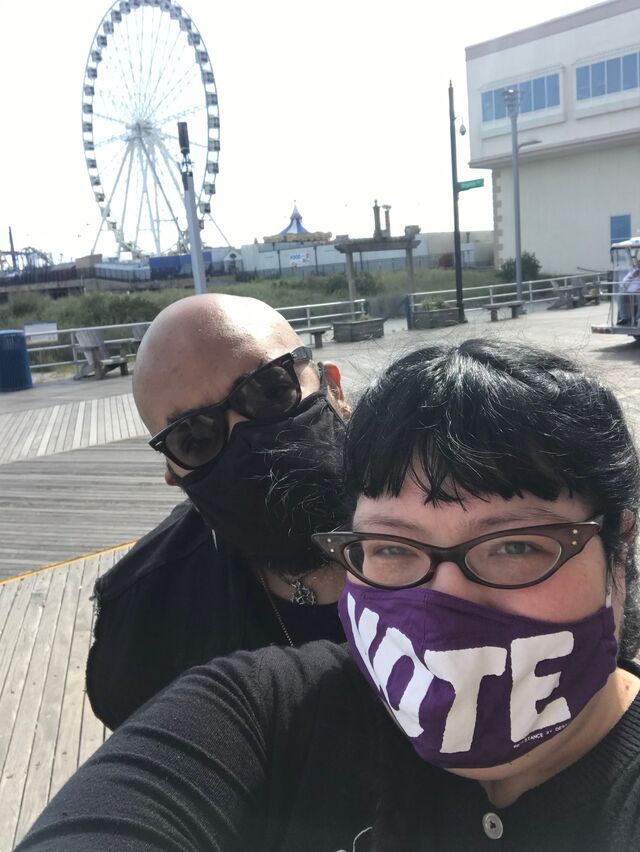 Atlantic City is only a two-and-a-half-hour drive from Manhattan, so my guy and I were able to pay a friend with a car to get us there safely. But the real safety party began at the front door to the hotel. Posted at every entrance was a security guard with thermal scanning equipment ensuring that nobody running a fever could get in. We also had to answer a lengthy list of questions about possible COVID exposure. The place is an anti-viral fortress. 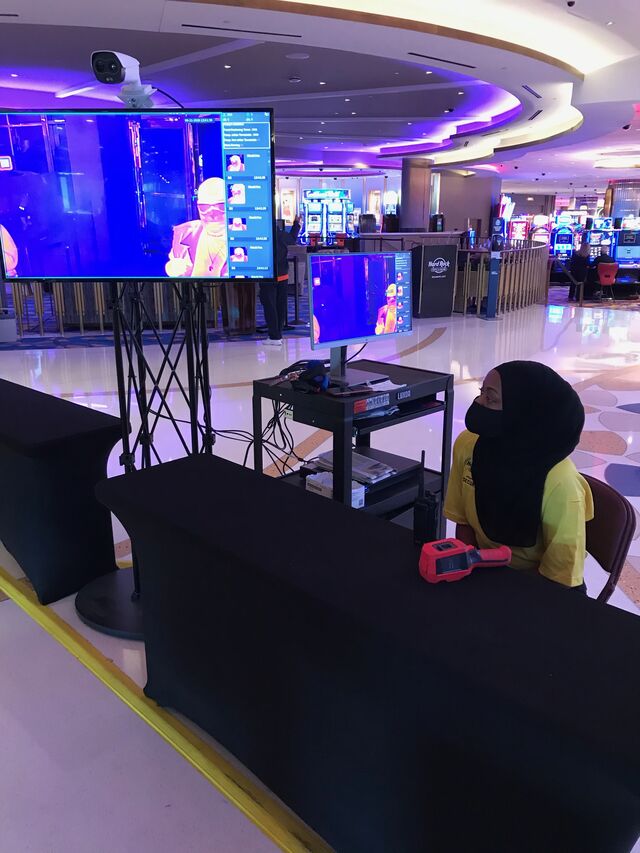 Once inside, there were more security guards maintaining 100% mask compliance and social distancing while making sure nobody was eating or drinking outside strictly designated areas. Smoking was prohibited everywhere, the front desk was walled off by plexiglass dividers, and so was every seat at every table throughout the entire casino, making the few gamblers and dealers on the floor look like rare exhibits under glass. 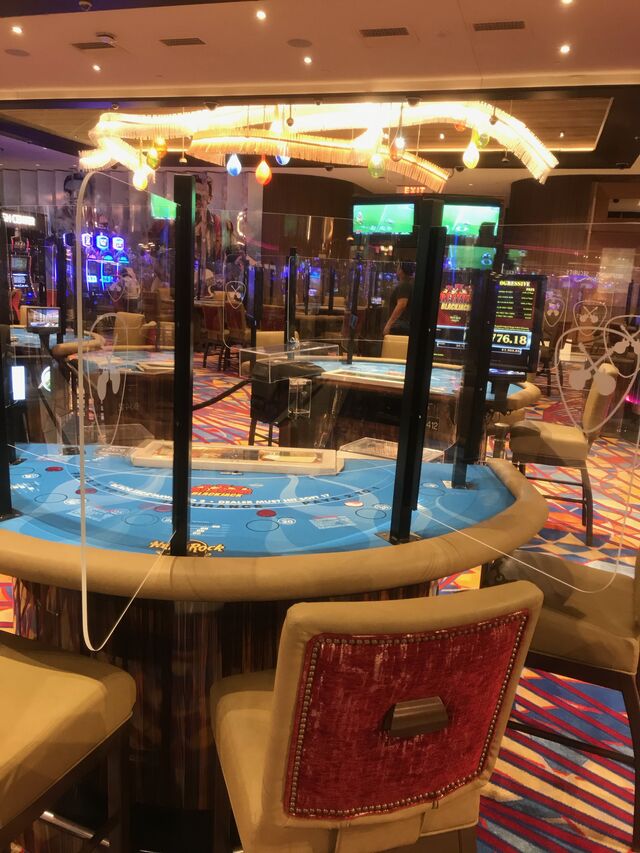 Hand sanitizer dispensers were absolutely everywhere, and a literal army of staff wearing bright yellow Safe + Sound shirts were buzzing around like an army of helpful bees constantly disinfecting every surface in sight. The few times I ventured into public bathrooms they were always in the process of being cleaned and signs outside informed visitors that every restroom was being cleaned hourly. 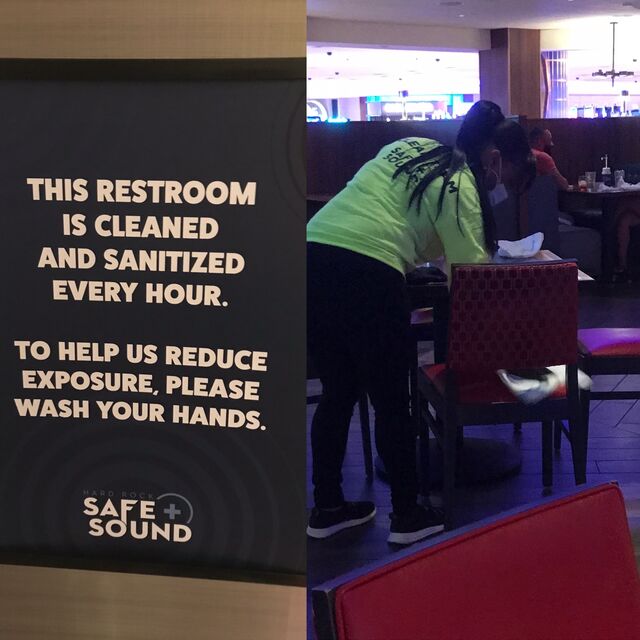 After a completely contactless check-in, we took our bags up to our ocean-view room and had to break a seal that had been placed on our door signifying that the space we were entering had passed a 272-point inspection process. The room smelled like lavender and fresh linen. Sun was shining in through the curtains and waves were rolling in on the nearly empty beach below. I had just arrived and already I never wanted to leave. 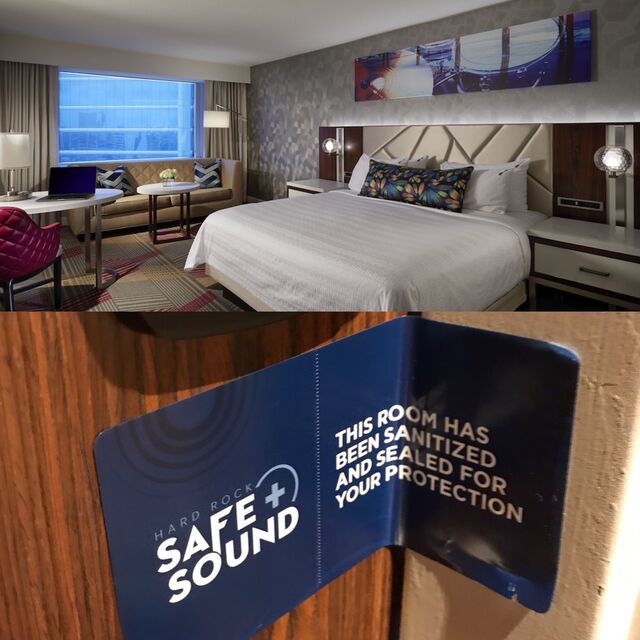 What followed was a whirlwind of totally revitalizing days spent walking the historic boardwalk, gazing out to sea watching surfers ride the sparkling September waves, swimming in the blissfully uncrowded pool, basking on the socially distanced sun deck, playing the sanitized slots (my lucky machine was Pac Man), racing go-karts on Central Pier, melting into an amazing fully-masked massage at the Rock Spa, and generally reminding myself how to be a happy, fully-functioning person again. I even managed to get work done—while the desk in our room was perfectly adequate for a day or two, I found that answering emails while propped up on six pillows in the enormous king-sized bed made me feel like the Queen of BUST Magazine. 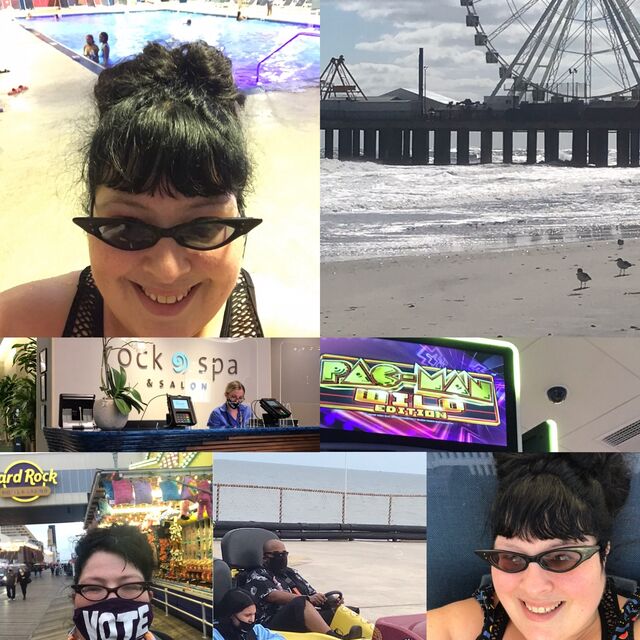 The part of the trip I was most nervous about before I arrived was eating, so I packed a few things for the room’s mini fridge. But I quickly realized that I could safely navigate feeding myself outside of what I brought, too. My favorite meal was a decadent old-school room-service breakfast—the rolling cart with the coffee and the fruit and the toast and all those little pots of jam—heaven! 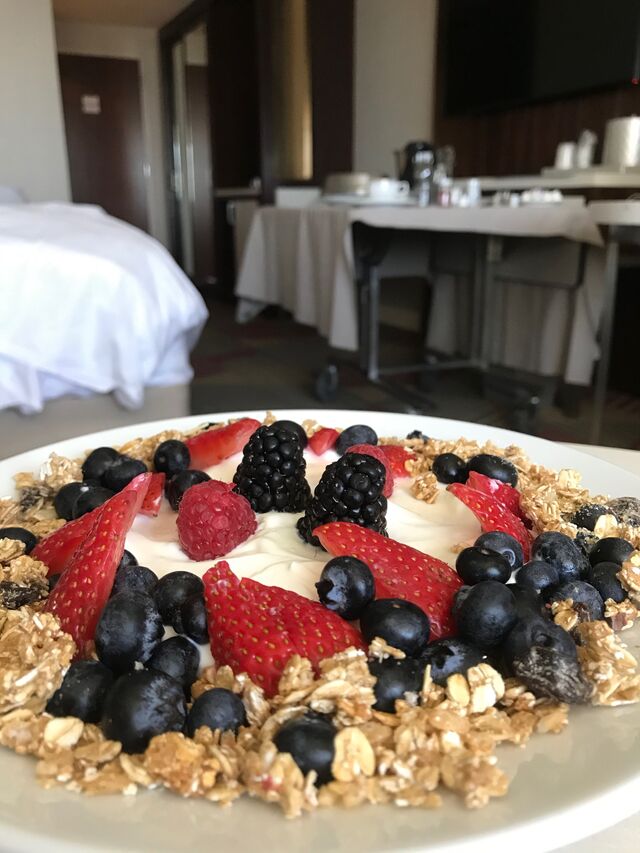 Another great meal was had when we found the Hard Rock outpost of the famous Atlantic City sub shop White House (a local institution since 1946!) in the “Flavor Tour” food court area. We grabbed a couple of huge sandwiches and sodas and ate them in a deserted outdoor area that pre-COVID was a bar but now functioned as a perfect place to eat overlooking the ocean. When I saw how truly far apart the tables at the indoor dining options were and how few diners were allowed to eat there at a time, we also decided to try a sit-down place called Sugar Factory. It was there that we had the most memorable drinking experience of our stay—an enormous goblet of blue, boozy, fizzy, blue-raspberry-flavored craziness that smoked and bubbled like a cauldron and had jawbreakers and blue gummy bears floating amongst the ice cubes. The snaps I took of my guy doing battle with that beverage were by far the most popular on social media. 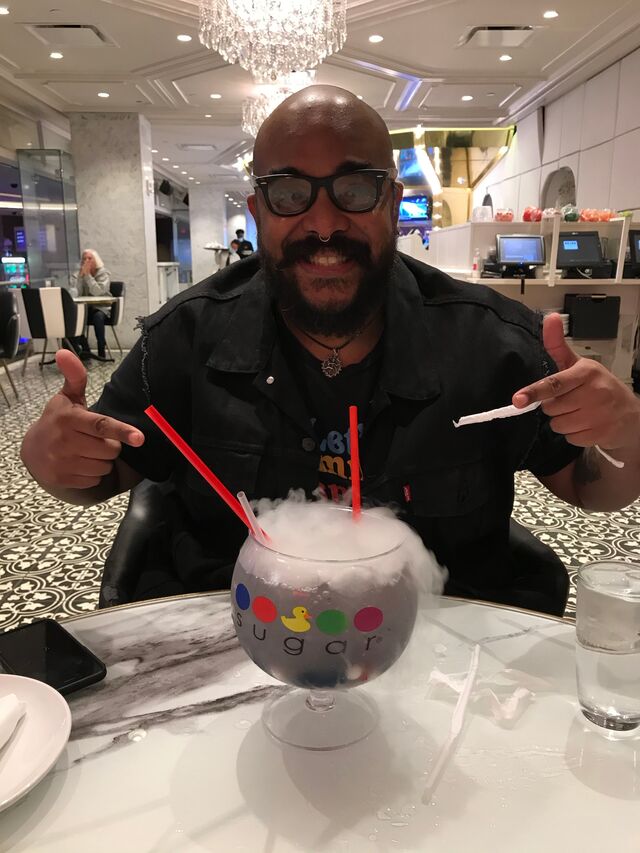 We enjoyed our time in Atlantic City so much we decided to stay an extra day. In fact, we’re already planning to return to the Jersey Shore (assuming New Jersey’s COVID transmission rate stays among the lowest in the nation at around 2%) the next time the quarantine blues become too much to bear. That being said, however, it should be noted that during my boardwalk explorations I did peek inside a few other oceanside casino resorts and the safety measures in those places were not comparable to those I experienced at the Hard Rock. I didn’t see thermal scanners at the door anywhere else and if there were extra cleaning crews on-hand, they were not an obvious visible presence like where I was staying. The whole Safe + Sound program definitely put my mind at ease during my first outing away from home since the COVID crisis began and helped me re-capture a little glimmer or normalcy during a very abnormal time. If Americans are ever allowed to travel to other countries again, I’ll be tempted to look for Hard Rock resorts outside the U.S. before deciding where to visit next. 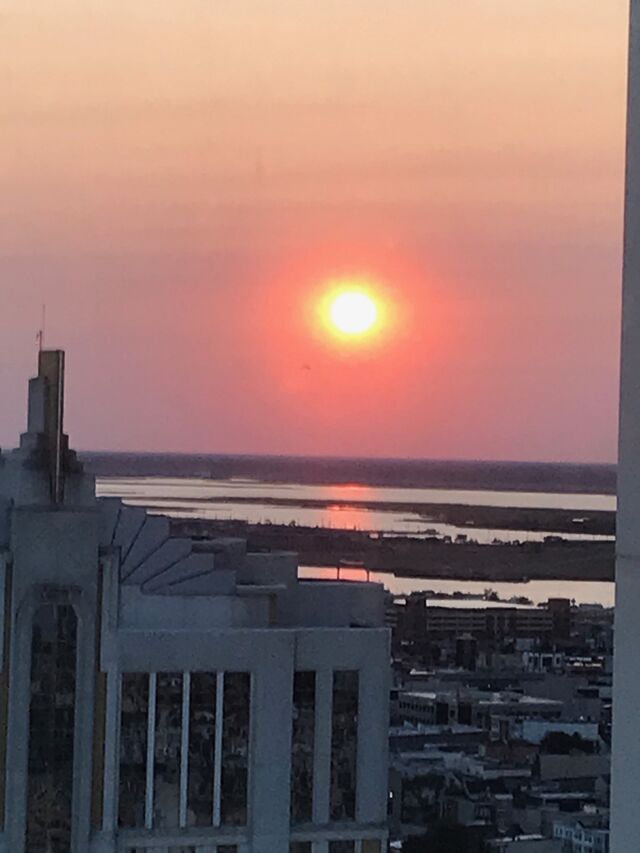