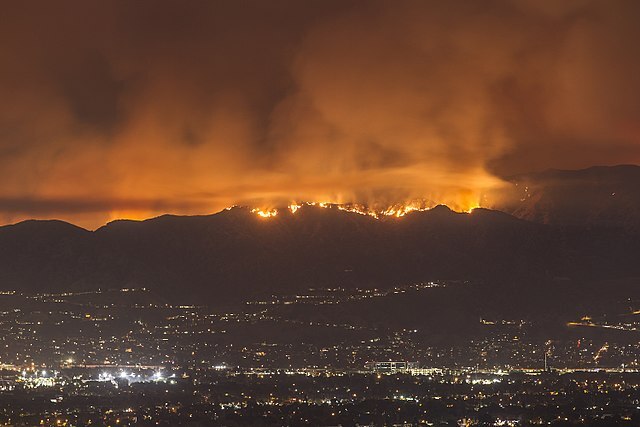 Gender strikes again and this time its California land that is suffering. Last week a wildfire broke out due to a gender reveal party in El Dorado Ranch Park in Yucaipa located in San Bernardino County.

The cause? A "smoke-generating pyrotechnic device" according to the CAL FIRE San Bernardino Unit press release.

CAL FIRE Law Enforcement has determined the El Dorado Fire, burning near Oak Glen in San Bernardino County, was caused by a smoke generating pyrotechnic device, used during a gender reveal party. The fire began at 10:23 am on September 5, 2020 in the El Dorado Ranch Park in Yucaipa. The fire spread from the park to the north on to Yucaipa Ridge that separates Mountain Home Village and Forest Falls from the City of Yucaipa.

Amidst all of the wildfires that are raging in Northern CA and Northwest coast, where the sky is coated in a shrill bright orange, grey flakes of ash are falling down and the air quality debilitating all during a pandemic…

I think it’s safe to say we evolved from the need to have gender reveal parties and the idea of gender.

And this is not the first time that gender reveal parties end in catastrophic events. Last year, BUST reported gender reveal parties have caused the death of one grandmother, wildfires in Arizona, and the almost death of an Australian man trapped in a burning vehicle caused by doing a burnout to reveal blue smoke from the tires.

These devastating and honestly violent aftermaths of gender reveal parties are revealing that holding on so tightly to this hetetonormative structure is truly debilitating and harmful to not just people but the land as well.

Jenna Karvunidis, from Pasadena, California “invented” the gender reveal trend back in 2008 for her first child. Karvunidis spoke to The Guardian June of this year, about how her idea of gender has changed (her daughter is non-binary and uses she/her pronouns) and is shocked at the ostentatious and quite frankly violent excess of current gender reveal parties.

“There’s such an obsession with gender that it becomes limiting in many ways and exploitative in others. You don’t want what’s between your legs to guide your path in life. I want my kids to grow up in a world where gender doesn’t matter.”

The idea of gender and private property comes down to a form of exploitation of both land and resources which includes people. This colonial system predicates on an organization or categorization of land and people that perpetuates a capitalistic gain which ultimately is cloaked with violence, harm and greed. In order to take a step towards a place where it is to say the least sustainable for all is to hand over the land--land rights back to the original people of these territories and communities before colonization.

Indigenous people have long participated in environmental sustainability such as controlled burns. It is actually healthy for the environment, it clears out old brush and renews plant life which in turn makes way for more food to grow.

Oh, so the people who lived there for centuries knew what the fuck they were talking about? Imagine that.

Bill Tripp the director of natural resources and environmental policy for the Karuk Tribe Department of Natural Resources reported in The Guardian that, “We carry the same qualifications as the federal and state agencies when it comes to prescribed burning or otherwise managing fire, and we hold the Indigenous knowledge that is needed to get the job done right.”

Through tribal funding and Indigenous stewardship, as Tripp mentions, the path to healing, land healing is absolutely real and can be forged.

This also adheres to the fact during slavery, enslaved Africans also took care of the land. Because of the booming economy of crops due to the enslavement of Africans, they were just as knowledgeable of the land, it’s uses and needs.

Gender reveal parties are a symptom of a long overdue disease that affects the world we live in today. Colonial systems that are kept in place to further exploitation by means of violence affect all of us. No one is exempt from the catastrophic consequences that these systems create.

By giving land back to Indigenous and Black stewardship, the ability for our survival rests in the understanding that these systems do not function. Nor our need for them. That gender and land is not tied to our performance, production or “private property.” We can choose to release these systems for a better way of living. We can choose life and the safety for not just ourselves but our communities as a world.

To find out what Indigneous land you are on, visit native-land.ca for a virtual mapping of the land as well as resources to donate to the Nations.