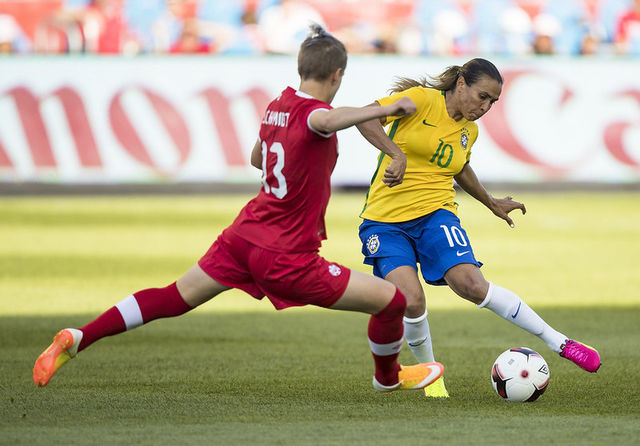 In May, The U.S. women's soccer team filed to appeal to a district court decision that dismissed their calls for equal pay. So far, there have not been many updates. However, there was some big news last week to close the gender pay gap in sports, just not in the United States. The Brazillian Football Federation (CBF) announced that the women's soccer team would receive the same pay and prize money as their male counterparts.

The CBF president announced in a statement, "There is no more gender difference, as the CBF is treating men and women equally."

Brazil's soccer federation announced it will pay its national men's and women's teams equally — one of the first countries to commit to equal pay.

It comes as the U.S. women's team, which has 4 World Cup wins, continues to fight for equal pay. pic.twitter.com/AGGt4wStiq

After the team's loss at the Women's World Cup in 2019, the conversation around women's soccer in Brazil rose to the global stage. Amanda Kestelman, a journalist with Brazilian outlet Globo Esporte, told CNN Sports, "I used to call them the force of nature because they made a lot with not so many resources. They got far with little, but they can't stay forever. We need to look for the future."

The announcement of equal pay for the team is amazing news, especially as women's soccer clubs in Brazil are typically funded through larger men's clubs versus relying on tournaments. With the COVID-19 pandemic, teams have not been playing, creating substantial financial stress with little independent income for the women's team.

This is the best thing you will see today.

Brazilian soccer legend Marta delivers a message for the next generation that will give you CHILLS ??pic.twitter.com/l1rwolzINU

Joining Australia, Norway, and New Zealand's soccer teams in equal payment, regardless of gender, the future of Brazil's women's soccer team is looking up.

"Men's soccer is still the religion in Brazil. You are born wearing a men's team jersey. When you're born, your father picks this team for you. But now people are starting to support the women's soccer," Marta Vieira da Silva, the legendary Brazillian soccer player, said back in June to CNN Sports. While unfortunate, it is often true that financial equality creates a sense of legitimacy.

Hopefully, this movement towards fuller financial support brings a further change in culture, giving the women's soccer team more visibility and support in the eyes of soccer fans.

Tags: soccer , women's soccer , Brazil , sports , equal pay
Support Feminist Media!
During these troubling political times, independent feminist media is more vital than ever. If our bold, uncensored reporting on women’s issues is important to you, please consider making a donation of $5, $25, $50, or whatever you can afford, to protect and sustain BUST.com.
Thanks so much—we can’t spell BUST without U.