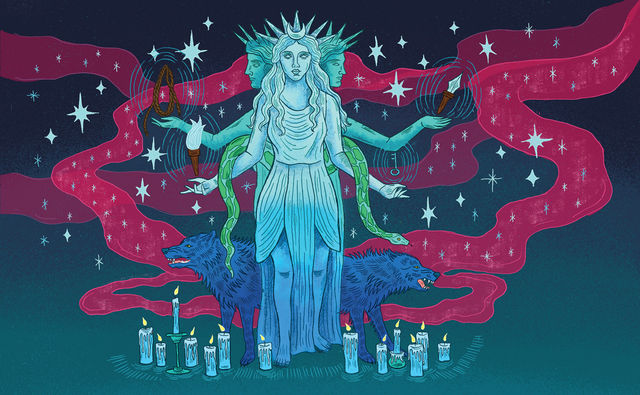 HEKATE. FOR THE WITCHES among us, the very name of this ancient goddess associated with magic, mystery, and empowerment evokes a rumble deep inside. Her history is complex. In her origins around the Mediterranean, she was known as Breaker of Chains—summoning her presence was thought to release you from whatever ties were binding. She's also been known as the Keeper of the Keys; the keys that open the gates to our souls. In some of humanity’s earliest texts, she is portrayed as a great mother figure whose soul fuels the world. But during the Dark Ages and the rise of Christianity, when the feminine was demonized, her association was limited to witchcraft, and she was portrayed as a crone. Untangling these threads yields a portrait of the way we view her now: a primal feminine force evocative of the very essence of life and death. But she has always been attuned to rebellious women. She is the soul of the wild woman who resists, and persists, to live her truth. This is why she’s such an important figure in witchcraft today.

In ancient Greece, folks who feared Hekate’s power left meals for her at the crossroads when the moon was dark. Otherwise, if displeased, the Keeper of Keys would open the gates to release her horde of wild women and other outcasts, both of flesh and spirit. In practical terms, it is believed that these offerings were consumed by those forced to live on the fringes of society—women who rejected the status quo of the times along with the otherwise disenfranchised who resided around this no man’s land. Hekate’s crossroads, then, are the spiritual epicenter of all who reject the norm. It is where we meet her when we are ready to claim our own key of sacred wildness. Hekate teaches that the way to break free of our chains is by unlocking the deepest parts of our soul. This is the key she offers.

Turning to Hekate during times of friction or challenge can feel especially supportive. To call upon her to break the chains that bind, witches perform the following spell (and non-witches can try it, too). Light a candle on a night when the moon is dark. On one side, place an offering to share with her, such as fruit, nuts, or smoked fish. On the other, lay a key to symbolize the breaking of your chains. You can also add one of her sacred herbs, such as sage, mugwort, or bay. The candle symbolizes a new beginning, a spiritual crossroads where you now stand. The herbs and the offering help evoke her presence. Recite these words, while holding the key at your heart: “Hekate, Keeper of Keys. Hekate, Breaker of Chains. I stand here at your crossroads, returning to my sacred wild soul. Bless this key with your wisdom.” When you are finished, wear the key around your neck and partake of the offering, leaving half for her.