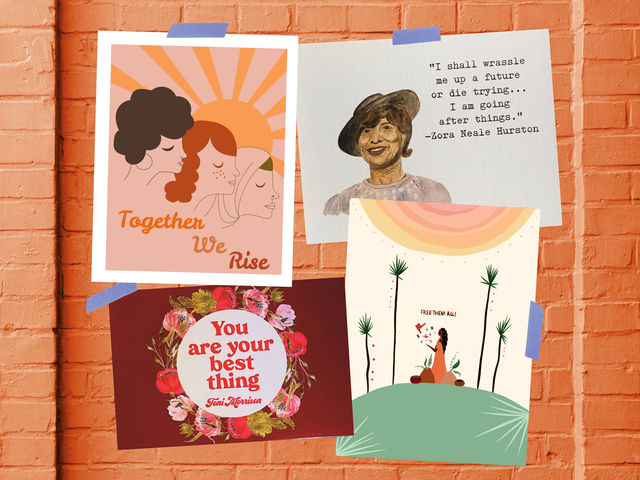 Having to fight to stabilize this country's postal service from the President definitely wasn’t on my shortlist of things to do, but it’s 2020 and here we are. If you haven’t already heard, 45 is currently trying to sabotage the upcoming election in his favor by sabotaging the USPS in the middle of a pandemic.

“They need that money in order to have the post office work so it can take all of these millions and millions of ballots… that means you can’t have universal mail-in voting because they’re not equipped to have it,” Trump said on Fox Business Network back in August.

With the removal of about 671 sorting machines scattered across 49 states, the District of Columbia, and Puerto Rico and Trump recently appointing Louis DeJoy (a loyal Trump donor) as the USPS Postmaster General, the country, the USPS, and the election are absolutely in trouble.

But apparently conservatives have always had beef with the United States Postal Service, dating back as early as the 1970s with President Ford. However the beef didn’t see real traction until 2006, under the Dubya administration, when Congress passed the Postal Accountability and Enhancement Act. According to The Atlantic, “it imposed a unique burden on the Postal Service by requiring it to pre-fund retirees’ health benefits through annual payments of roughly $5.5 billion, for 10 years.” Between that act, The Great Recession, and the rise of the internet and the Digital Age, conservatives really put the USPS in the red.

So why do conservatives want to privatize the USPS? Money, of course. By privatizing the federal agency, it would open the postal markets to competition. It would give the USPS the flexibility it needs to cut costs and diversify, while providing equal treatment to businesses across postal and package markets. It sounds good, right? With the USPS privatized, what kind of rich, megalomaniacs would be able to afford to put a bid over the USPS? See... Ultimately, privatizing the USPS, would hurt the interest of Jeff Bezos, owner of Amazon and The Washington Post. The same Washington Post that has been critical of the Trump Administration.

The amount of pieces of mail have consistently and significantly dropped for the past decade. And like most businesses and operations, this year, the USPS is taking a major hit because of the pandemic. The USPS absolutely needs reform. But not while under this current administration. While the U.S.’s predecessor, the UK had similar issues which resulted in a successful IPO for their postal service, it took a total of three years to put in place. Americans cannot afford an unstable postal service, in a pandemic, during the election year.

While the election is a priority, it is not the only merited reason to preserve the USPS. Millions of Americans rely upon the postal service to receive life-sustaining medications, according to a survey by the National Community Pharmacists Association, 20 percent of adults over 40 who take medication for a chronic condition get those pills by mail order. Indigenous people as well as others in rural America will also be disproportionately affected without the USPS. According to Vox, First Nation Natives already have few resources dedicated to keeping them connected with the world. And for the rest of rural America, FedEx and UPS (despite Trump’s beliefs) doesn’t even deliver to remote rural areas.

In addition to sustaining access to lower income, disabled, and communities of color, historically, the USPS has provided a chance toward achieving the “American Dream” for—veterans, people of color, women, new immigrants—but for no other group has it been more important than for Black women. As reported by The Atlantic, “The Post Office was for many years the nation’s largest employer of Black workers; in the decades that followed its conversion into the USPS, Black people were at least twice as likely to work for the Postal Service as white people.”

But above all else, the most personal reason for me, to fight for USPS is that I am a postal baby (or at least that’s what I call myself). My mother (a Black woman) has worked at the USPS for 26 years. I watched my mother study for her entry exam as a child in the mid ’90s; fundraise up to two hundred-thousand dollars for various charities/organizations; fundraise and deliver gifts to her deployed coworkers’ children on Christmas Eve; bring home storage bags full of antibiotics post 9/11 when Anthrax was found in her distribution building in Connecticut; and most recently, I witness her beat COVID-19 which she likely contracted from her facility in Florida.

So you’ve done it all, bought a book of stamps, texted USPS to 50409, to notify your state officials--but you’re a millennial or Gen Z and have no idea what to do with that book of stamps you purchased--have no fear! Here are BUST’s top picks for women-owned shops for postcards, greeting cards, and stickers to mail to your loved-ones. Not only are you doubling-down by supporting the USPS, you’re supporting small woman-owned businesses too. Now there’s no telling when those parcels will arrive, as the USPS has direct orders to prioritize absentee ballots for the election, but it’ll get there eventually.

And in the meantime, if you haven’t had enough USPS content, listen to the “Going Postal” episode from the You’re Wrong About podcast. 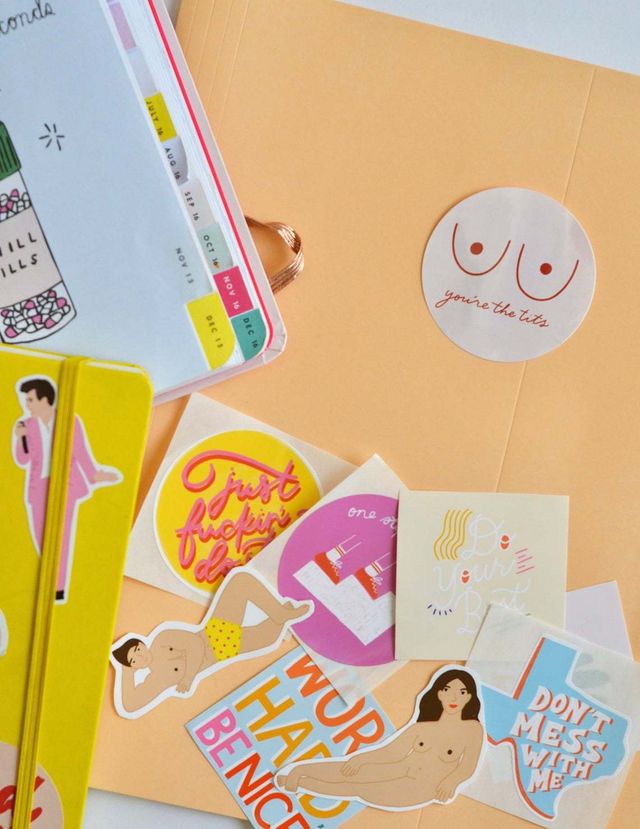 This Austin-based illustrator and graphic designer has it all: stickers, greeting cards, prints, sweatshirts, and even a digital coloring book. These illustrations are both nostalgic and fresh as they illustrate women of all shapes, colors, and sizes. You’re sure to see yourself or someone else you love, here! 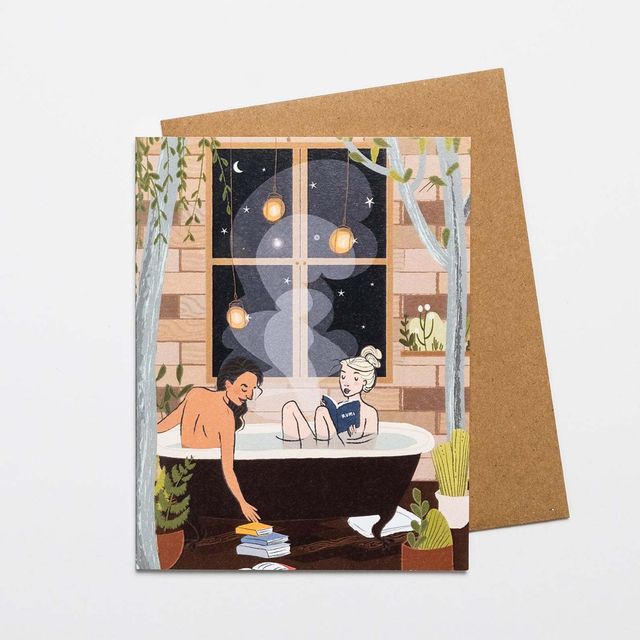 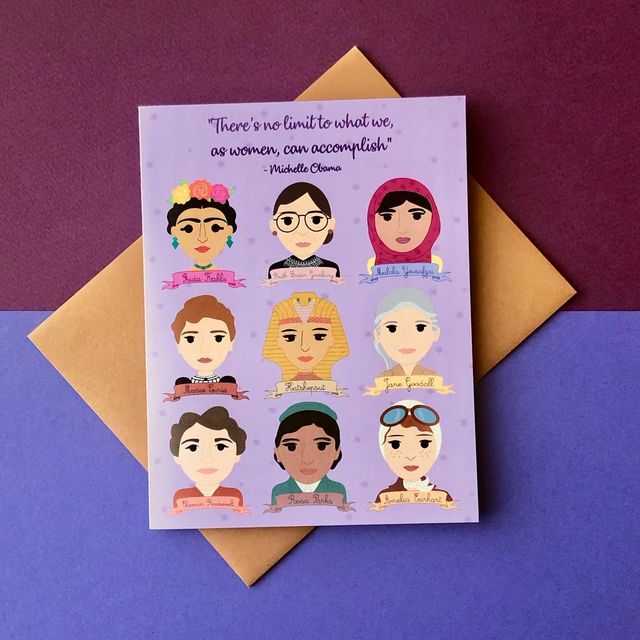 This mother-daugter-owned shop is a feminist playground. From stickers, greeting cards, apparels, tote bags, to pins and patches. What else more could you need? The Shero Collection features Shirley Chisolm, Elizabeth Backwell, and of course RBG to name a few. (You don’t want to miss the Hero Collection either.) Bored Inc. even donates a percentage of profits from their Dissent Club items to charity. 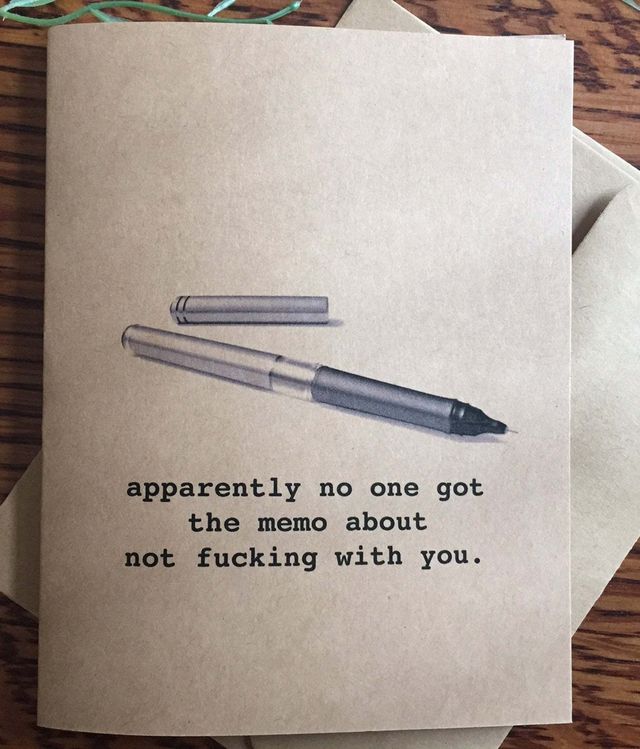 This shop’s tagline “Mildly offensive. Highly entertaining” sums it up perfectly. The handmade greeting cards from Colorado will certainly appeal to any snarky feminist and all of their friends. 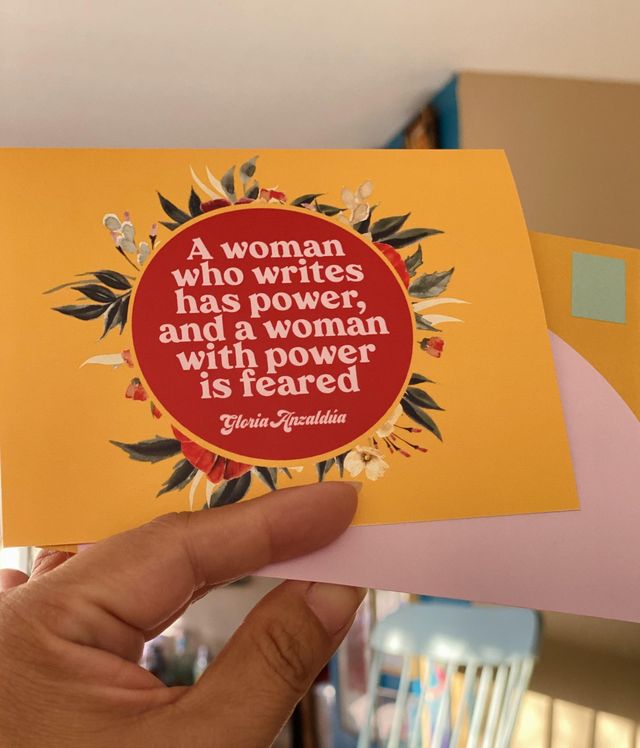 Latina-owned, Las Ofrendas, features original, handwritten designs of quotes and imagery of the baddest mujeres, such as Gloria Anzaldua, Sandra Cisneros, Celia Cruz, and Frida Kahlo. These postcards will be hard to send out, as you’ll absolutely want to keep them for yourself. 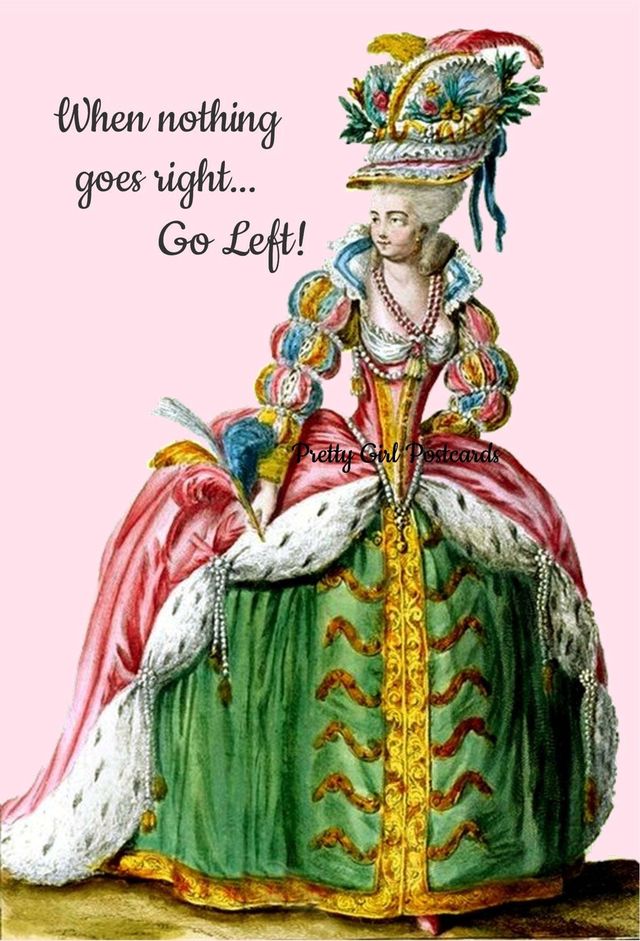 Betsy Hoffman’s PrettyGirlPostcard is exactly as described, “funny, irreverent, sarcastic, and slightly twisted.” This cards and magnets are perfect for any lover of all things Jane Austen and 19th Century. 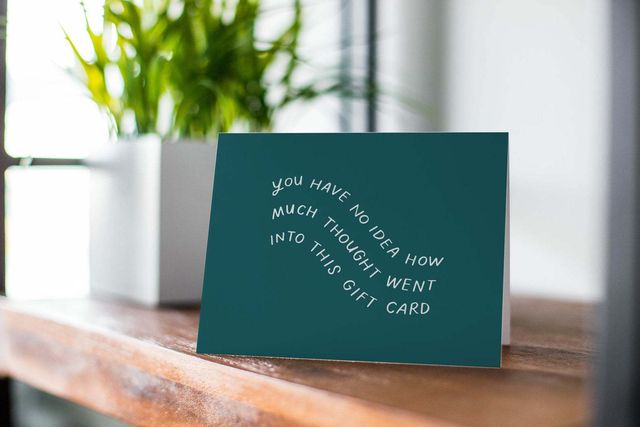 Need a quick pick-me-up? These greeting cards have Hallmark beat. Each piece is handwritten, painted, foiled or digitally produced. 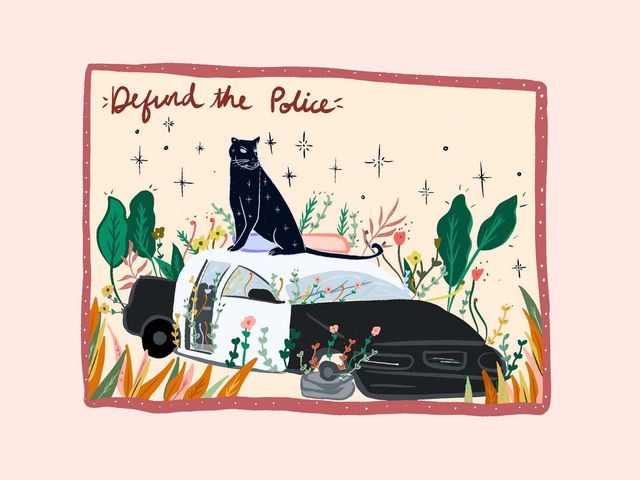 Manuela Guillén’s artwork is dreamy, whimsical, and political. Her work is mostly prints, pins, and vinyl stickers with only a few postcards but they’re absolutely worth sharing amongst your friends. 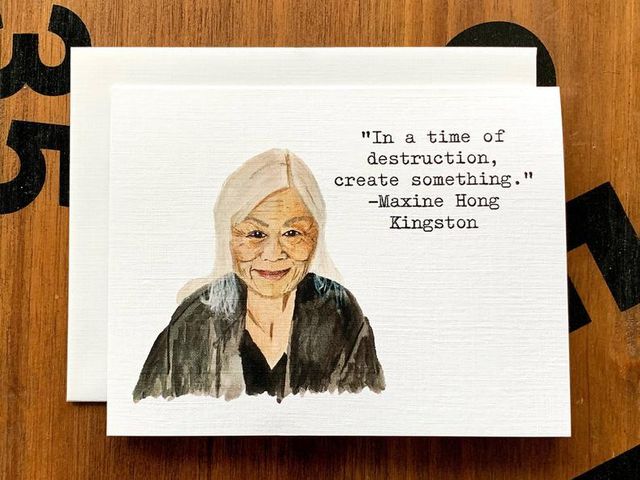 Loss for Words Designs says all the right things. Rather, painter Lindsey Elias captures the essence of your favorite feminist icons. You'll want to frame these cards. 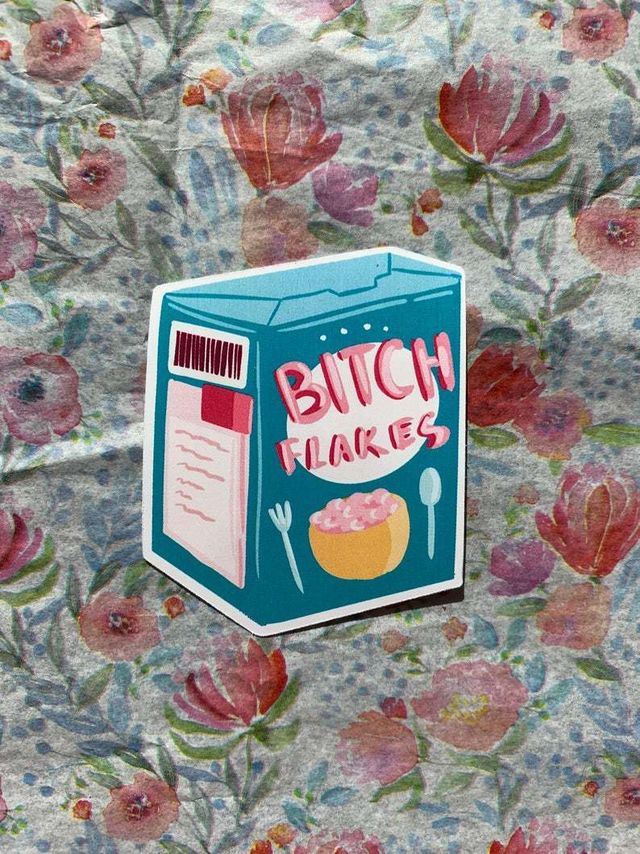 Stickers with cuss words on them? HYFR! These stickers are what our middle school dreams are made of. Mail these bad boys off, stick them on your face like we used to, or, hell, stick them all over your walls if you want, because you're grown AF.

How A Woman Helped Deliver Over 500,000 Masks To Healthcare Workers: BUST Interview