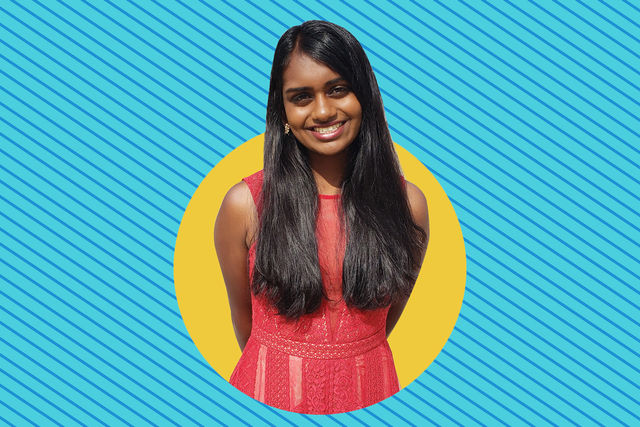 The newest STEM star taking the biotechnology industry by storm isn’t some Silicon Valley bro. She’s a Harvard University sophomore named Kavya Kopparapu and she’s literally changing the world. First introduced to the intersection of medicine and technology by a group of women scientists who came to her elementary school in Northern Virginia, Kopparapu was inspired to make her own breakthrough discoveries. “Being a student, you don’t have any stakes,” the 19-year-old says of inventing two precision medicine platforms before she was old enough to legally drink. “If you fail, you fail. If you succeed, then you’ve done something impactful for the world.”

Kopparapu is certainly making an impact. One of her inventions, Gliovision, predicts with 100 percent accuracy the genetic profile of patients with glioblastoma, an aggressive form of brain cancer. The other, Eyeagnosis, was inspired by her grandfather’s diabetes. It uses a lens that can be attached to a smartphone to diagnose diabetic retinopathy [eye damage], a side effect of the disease that most often affects low-income individuals and people in developing countries.

With a passion for public health and democratizing access to healthcare, Kopparapu’s social justice work doesn’t stop there. The entrepreneur also founded Girls Computing League (girlscomputingleague.org), a non-profit that introduces young women in the D.C. area to programming. “A lot of girls don’t even get the initial experience to be inspired by computer science,” she says of that project. “It’s always an uphill battle for women in STEM and I think that affects their approach towards research. [My students] are not afraid to take risks, they’re not afraid to try things that might not necessarily work. I wouldn’t be where I am today if I didn’t have incredible women to look up to.” –aliza pelto