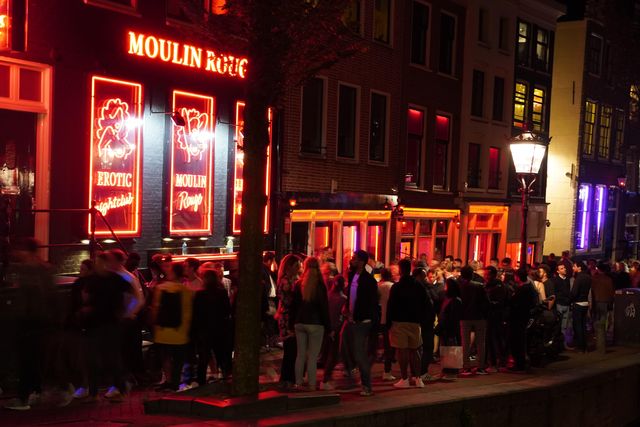 In the Netherlands, lockdown measures to protect against COVID-19 have affected one industry in particular: sex work. According to official figures, 7,000 sex workers make their income in Amsterdam, primarily from visiting tourists. However, since the imposed lockdowns past March, the city’s infamous Red Light District (or “De Wallen”) has suffered a significant financial blow as tourism came screeching to a halt and window brothels shut down.

Without income for nearly four months, many sex workers had to return to their home countries in eastern Europe, Felicia Anna told CNN, a Romanian sex worker and founder of Red Light United, a trade union representing 110 women. Many of those who stayed worked illegally.

Don't come to the red light district. It is too busy. Several streets are temporarily closed. ⛔#staysafe #keepdistance pic.twitter.com/qfqQreDDMB

While the depletion of tourism has financially hit Amsterdam – 70 percent of the district's revenue comes from tourism – the city’s residents have a different take. Relishing an emptied Amsterdam free of loud noise, littering, and drunken tourists, many are petitioning to keep it that way. More than 30,000 residents have signed a petition titled "Amsterdam has a choice," urging city authorities to improve the quality of life for residents in the center by restricting the annual overnight tourist stays to 12 million. Last year the total was at 18.8 million.

In some ways, these restrictions appear to benefit sex workers: as tourism has risen, so have dangers. The Red Light District is increasingly flooded with tourists who are simply there to ogle brothels: often laughing at, verbally abusing, and photographing sex workers against their will. The district has already taken measures to combat this by banning tours that take visitors along brothel windows. “Not only because we want to prevent overcrowding in the Red Light District, but also because it is not respectful to sex workers,” Udo Kock, a deputy mayor at the time, said in a statement. “It is outdated to treat sex workers as a tourist attraction.”

Now, in the face of COVID-19 and the rising resistance against tourism, city officials are considering a major overhaul of the Red Light District. While this is cited as an effort to “protect sex workers from degrading conditions,” imposed protective measures often come as a double-edged sword in the sex work industry. For example, Red Light United, a union founded for sex workers in Amsterdam to resist the new policies, claims that more than ninety-three percent of sex workers in Amsterdam are against moving the brothels. They state that “any measure aimed against tourism is a measure against sex workers in the Red Light District.”

Heading the revisioning of Amsterdam is the city’s mayor, Femke Halsema. She has presented four scenarios for the district, which range from reducing the number of brothel windows to moving sex workers to an entirely new location. She has even suggested opening a "prostitution hotel" outside the city center and said in May that the search for a new location was well underway.

"That would be extremely dangerous. When you leave your shift at 5 a.m., the robbers will be lining up," Anita, a 56-year-old sex worker from Amsterdam, told CNN. "We don't want to move into a prostitution hotel. Here everyone can see us. That's what makes our jobs safe." They also worry about the impact moving elsewhere will have on their income as they rely heavily on walk-in tourists.

It’s clear that COVID-19 and tourism have intertwined into a bit of a Gordian Knot when it comes to sex workers’ future – we won’t know for sure until after the summer when the council will hold a vote on the different proposals for the Red Light District.

This is Belle. She’s a monument to sex work in the heart of Amsterdam’s Red Light District. The plaque below her reads: “Respect sex workers all over the world.” pic.twitter.com/mtsWjJofyP

Image via Gio Mikava on Unsplash