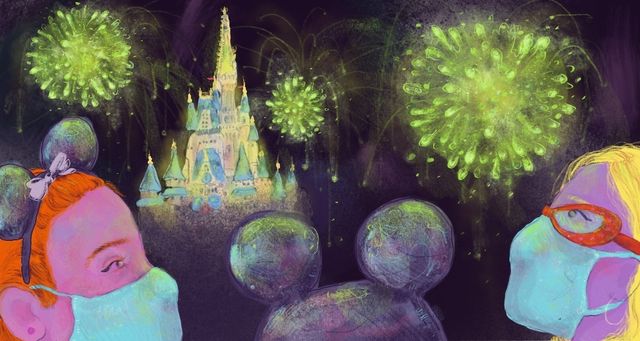 It looks like Florida is going to continue holding the title of “Worst State.”

As the state we have to thank for giving us “Florida Man” headlines and Perez Hilton, we can now add another thing to the list.

On Sunday, Florida broke the national record for the largest single-day increase in coronavirus cases at 15,299 positive tests on Sunday. Corona-related deaths have also been on the rise. Three weeks ago, the state averaged 30 deaths a day; last week, that number jumped to about 73 a day, according to Market Watch. Moreover, Florida’s ICUs are currently at 85 to 90 percent capacity, and doctors are predicting a rise in the mortality rate with more and more public gatherings happening.

And yet, despite limited hospital capacity, 73 coronavirus deaths a day, and warnings about public gatherings from medical professionals, Disney World opened last weekend.

There are some changes that have been made to the happiest place on Earth. At the moment, only Magic Kingdom and Animal Kingdom are open to the public, but Epcot and Hollywood Studios are scheduled to open on Wednesday. Masks that loop around ears (so, no bandanas) are required to get in and must be worn at all times, except for when swimming and eating. Hand sanitizer and sanitizing wipes are available throughout the park. Hotel and restaurant choices are limited and many stores, restaurants, and kiosks are closed.

There are also no character meet-and-greets (for obvious reasons) and parades and fireworks have been indefinitely canceled to avoid large crowds, according to CNN.

Moreover, photos taken in the park on opening day are showing that the congregation of large groups is not entirely preventable in a place like Disney.

God this is bleak pic.twitter.com/1aSKOsV8jx

Needless to say, many online disagree with the park’s decision to reopen.

No one:
Parents taking their kids to Disney world after Florida just had over 15,000 new cases in one day: pic.twitter.com/ixZn0UUoCI

Tags: coronavirus , COVID-19 , Disney , Disney World , pandemic , tests , Florida
Support Feminist Media!
During these troubling political times, independent feminist media is more vital than ever. If our bold, uncensored reporting on women’s issues is important to you, please consider making a donation of $5, $25, $50, or whatever you can afford, to protect and sustain BUST.com.
Thanks so much—we can’t spell BUST without U.