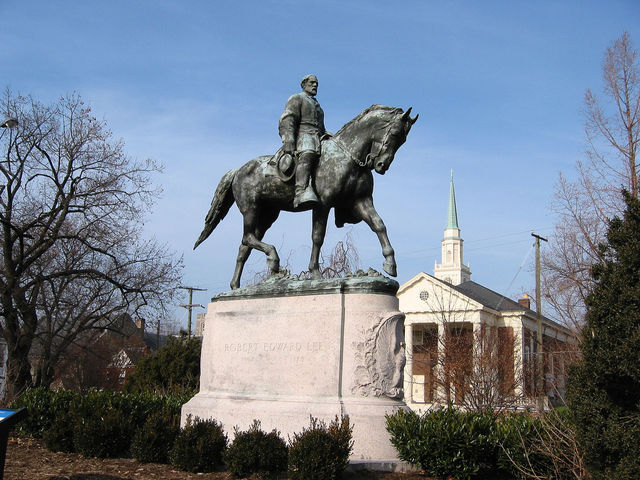 With all these statues coming down, many have asked who should replace them? Should we even have statues? What’s the purpose of them? Many say it’s for history, but museums are for history. Statues are not for history, they’re for recognition. Most of the confederate statues were put up during the Jim Crow era and the Civil Rights Movement as a way to strike fear and “put people in their place”. That’s why they’re so easy to take down, they were put up quickly with little to no regard about who they were really putting up.

As a way to confront some of the long-held institutions in America, many have also tried to change town names. Recently, Rhode Island proposed to change its name from the State of Rhode Island and Providence Plantations to just Rhode Island. There’s even a petition for Columbus, Ohio to change its name to Flavortown as an ode to famous chef Guy Fieri. So, as we address our racist history, we should also recognize incredible Americans that advocated for change and deserve recognition. Here’s a list of eight people who actually deserve a statue:

New York, New York
The statue of Major General Philip Schuyler in front of City Hall was ordered to be removed by Mayor Kathy Sheehan, who noted Schuyler was reportedly the largest slave owner in Albany. We recommend a statue of Sojourner Truth, famous abolitionist and women’s rights activist who penned the famous piece, Ain’t I A Woman, should be erected in its place. She was born in Swartekill, New York and later moved to New York City. She was born into slavery but was able to escape with her daughter and later went to court for her son, making her the first black woman to win a case against a white man. The statue of Theodore Roosevelt outside the American Museum of Natural History has also been ordered to be removed. We think that a statue of famous writer, feminist, and civil rights activist, Audre Lorde, should be put in its place. She was born in Harlem and describes herself as “black, lesbian, mother, warrior, poet.” Both Truth and Lorde are perfect examples of amazing people who used their art to protest for change.

Alexandria, Virginia
In Alexandria, Virginia, the Confederate statue, “Appomattox,” which depicted a Civil War soldier, was removed from an intersection. A forgotten hero of the civil rights movement in Virginia, Samuel Tucker should get the recognition he deserves. He was born in segregated Alexandria and became an attorney who represented African Americans in civil and criminal cases. Tucker attended and led many peaceful protests, sit-ins. He also became the leading attorney for the NAACP in Virginia. Tucker was an incredible man who played a big role in the civil rights movement in Virginia.

Birmingham, Alabama
A statue of Confederate officer Charles Linn was taken down by protestors on June 2. Mayor Woofin plans to remove a Confederate Sailors and Soldiers Monument. In the place of the statue of Charles Linn, civil rights activist Angela Davis should have a statue. Davis was born in Birmingham and is an activist, philosopher, Marxist feminist. She was a member of the Black Panther Party and has written many books on class, race, feminism and the US Prison System. Recently, Davis’ philosophies and ideas have been taken much more seriously.

Dallas, Texas
A Texas Ranger statue that went by the name “One Riot, One Ranger,” was removed from Love Field Airport on June 11. A statue of Texas Native Juanita Craft, activist and politician, should be put in its place. She participated in sit-ins and peaceful protests. Craft also served as a member of the Dallas City Council and helped a black student enroll at North Texas State College. She played a big role in Civil Rights Movement in Texas and has been praised by many.

Sacramento, California
A work crew lifted the statue of John Sutter, a 19th century man who enslaved Indigenous people, off its pedestal in Sacramento, California. In his place, we think a state of actor LeVar Burton should be placed. Famous for his work on Roots, Star Trek and Reading Rainbow, Burton is both an incredible actor and director. He’s donated to many organizations and is on the board of directors for the AIDS Research Alliance.

Jacksonville, Florida
A statue honoring fallen Confederate soldiers was removed from Hemming Park in Jacksonville, Florida. The statue had been at the park since 1898. We think a statue of A. Phillip Randolph should be put there instead. He was labor unionist, activist and politician. Randolph led the Brotherhood of Sleeping Car Porters, the first predominately black labor union and was the head of the March on Washington. Born in Jacksonville, Randolph was an incredible leader and activist and deserves to be celebrated.

Philadelphia, Pennsylvania
The statue of former Mayor of Philadelphia Frank Rizzo was removed June 2. Rizzo has been accused of mistreating members of the Black and LGBT communities during his two terms in the 1970s. We propose that Questlove, musician and music journalist, should replace Rizzo’s statue. He is an activist for the issues and has definitely made an impact on culture.

Nashville, Tennessee
A statue of politician Edward Carmack, a known critic of Tennessee civil rights journalist Ida B. Wells, was taken down outside the state capitol. In his place why don’t we put Ida B Wells. Although there has been talks of giving Wells a statue in Chicago, she should also get a statue in Tennessee. She was an investigative journalist, teacher, activist and one of the founders of the NAACP. While many have said that Dolly Parton should have her own statue in Tennessee, and we agree, we should first give one to Ida B. Wells. She was an incredible woman who deserves a monument to her hard work and activism.

Apparently Americans Were Much Happier 50 Years Ago