Details
BY Elizabeth Winn
IN Living
Published: 01 May 2020 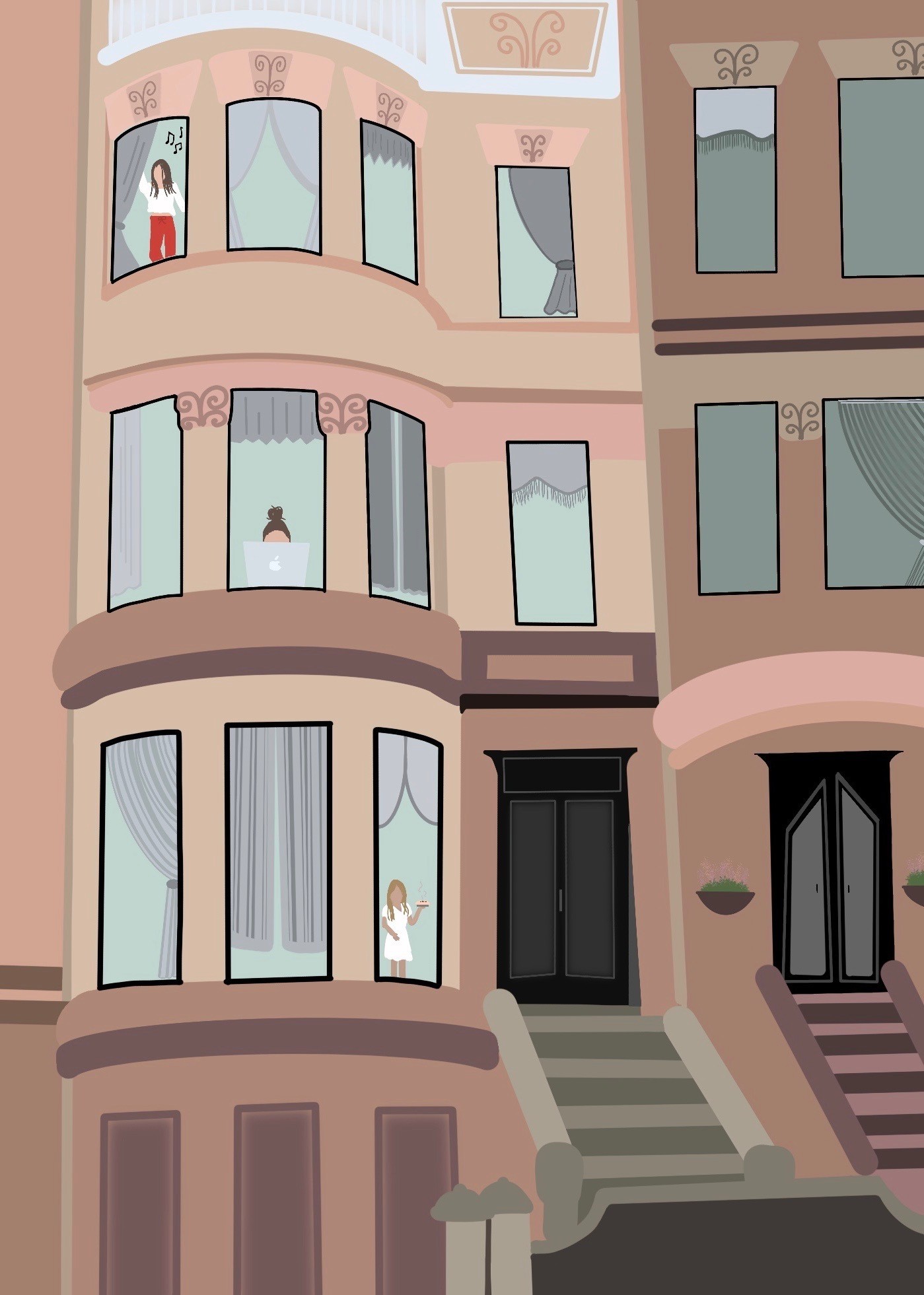 When was your last normal day? Can you remember it? These three New Yorkers can.

BUST spoke to three different individuals in New York City about their experiences, feelings, and advice for others during the coronavirus pandemic. From their last normal, pre-lockdown day to now, over a month into quarantine, everyone's life has changed irrevocably in just a matter of weeks.

On Wednesday, March 11, the World Health Organization (WHO) declared COVID-19 was no longer just a public health emergency of international concern, but a pandemic. On March 20, as the number of COVID-19 cases surpassed past 7,000, New York Governor Andrew Cuomo issued a statewide "stay home" order. The order meant all non-essential businesses must close and all outdoor activity limited to "solitary recreational exercise," Governor Cuomo said.

"It’s running. It’s hiking. It’s not playing basketball with five other people," Cuomo said. Now, New York City is considered the global center of the pandemic with a total of 159,865 cases.

24-year-old Amelia Frances' last normal day probably mirrored most of ours. She woke up, drank a cup of coffee, and took the 30-minute train ride from her apartment in Brooklyn to Manhattan’s neighborhood Tribeca for work. It was Thursday, March 12, and though the World Health Organization (WHO) had already declared the coronavirus a public health emergency of international concern, nonessential workers were still going to work.

That last day in the office, Frances said they talked about the coronavirus, but it was more of an afterthought then the topic of conversation. “I just remember [my boss and I] talked about it at work and we were like, ‘Oh, it’ll be fine.'"

She left the office around 6 p.m. People were still riding the subway, she noted, but there were definitely fewer people. The following day, Friday, March 13, Frances went into quarantine.

“I started to feel sick,” she explained. “I was like, ‘I don’t know if I have it so I’m just going to stay home.’ So I think it was a couple days before the state said to do it.”

However, it took a while before Frances’ office went completely remote.

It wasn’t until New York state declared that only essential workers could go to work that Frances’ job would become remote until further notice. Frances lives with one other person, a college student and nanny recently unemployed due to coronavirus, and though their experiences have been a bit different during this international health crisis, they try their best to recreate some sort of normalcy in their everyday routine.

“My kind of routine is I have coffee every morning and I know, at 6 p.m., I will have a margarita,” Frances said. “What [my roommate] and I have been doing recently is as soon as work ends, we drink wine and then we watch an American Girl doll movie, and that’s pretty great.”

Though there is a clear difference between the start of Frances’s quarantine and now, she said her best advice for others right now is: “Just do something that makes you happy.” For Frances, that “something that makes her happy” changes day to day: sometimes that looks like yoga in the morning or writing her friends letters at night or walking to the park in the afternoon.

“It doesn’t have to be a super big thing,” Frances said. “Just anything that makes you feel good.”

For Brooklyn-based English teacher Ray Carroll, their last normal day was a little different. Ironically enough, it wasn’t that normal. It was their twenty-fourth birthday, Friday, March 6.

“It was a really lovely day,” they said. “It was one of my best birthdays to date.”

Carroll got a card from their class, was treated out to lunch by their coworker, and got to go out to a bar with friends.

“It was just really nice,” they said. “I got to have all my friends together in person, in front of me, drinking in public at a bar, and then go out dancing with strangers and then be surrounded by people and not have it be scary or feel like I was breaking a rule by being outside.”

That was the Friday before everyone began self-isolating and quarantining, and though that day feels like a world away, Carroll said it was nice for them to close out that last chapter of their life with their friends on their birthday before quarantine.

Since then, they said, life has been “wild.”

They have been self isolating since the evening of Friday, March 13, and while Carroll can count the number of times they left the house to go grab groceries or run to the pharmacy, their two roommates are both essential workers and still go to work everyday.

“This whole time I have been here at home both of them have been going out, you know, to keep working most days. They have really abbreviated schedules — their schedules have definitely changed and they work less hours outside of the home but it's been crazy. But it's been very juxtaposed from my own experience,” Carroll said.

Meanwhile, Carroll’s work shifted from the classroom to their living room. Carroll is an English teacher at a New York charter school, and though they still teaching, they shared that the transition from teaching kids in the classroom to going virtual is even harder than people may think.

“It is really making me realize how much I was able to accomplish with my children through sharing a physical space with them,” Carroll said. “I feel like a lot of teachers thought, 'oh, remote learning, we’ll just do this online, it’ll be sort of the same as standing up in front of a classroom.' But it’s just so different and so strange.”

The change in commute, though, has given Carroll a lot more time to do what they love: read and write. So when I asked them if they had any advice for people right now, they immediately said, “Write.”

“Write everything down. We’re living in a really really insane period of our life,” they said. “Leave traces of what is happening.”

23-year-old Madeline Marona's last normal day was her last day at her old job: Monday, March 16. Before the coronavirus pandemic shut down all nonessential businesses in New York City, she worked as the Operations Coordinator at the Maman Cafe in SoHo.

“I think I was shipping out orders and cookies and stuff,” she said. “Just helping the people in the front working the register because they were short.”

The next day Marona went in and did basically the same thing, except she left the cafe that night without a job.

“They told me, ‘Hey, we’re actually going to be shutting down all the stores. We’re not going to be able to deliver anymore or anything like that,’ and then they let me know I was let go,” Marona said.

For the next two weeks, Marona was unemployed. She spent most of her time in her Brooklyn apartment, leaving only for exercise or groceries. However, what helped her get through those two weeks was establishing a routine.

“My roommates and I had a routine where we would get up everyday and make a big French press of coffee and say what day it was, what the weather was going to be, and then say this day in history, which is kind of silly,” she said with a laugh. “We’d have a lot of projects and cook a lot, and I think that was two weeks that I was not doing anything work-wise.”

However, Marona wasn’t unemployed for long. She began a new position as Office Coordinator at New York-based fashion brand Rowing Blazers on Tuesday, April 14. Marona goes into the office a couple days a week to fulfill orders, working with one other person. She said they stay within the United States' “no more than 10 people in one place” rule.

Though she’s practicing social distancing and quarantining, Marona feels that this situation has brought her closer to people, not further. Marona has been FaceTiming family and friends daily and even making new friends. “I don’t think we would be as close had this not happened,” she said.

That doesn’t make this period of time any easier, though.

“What we are going through is very hard and people don’t realize it’s a challenging situation,” Marona said. “I think taking everything day by day and setting out tangible goals for yourself and having a schedule is very important because we all crave those things, whether or not we know it.”

Greta Thunberg Asks, What If We Treated The Climate Crisis Like COVID-19?