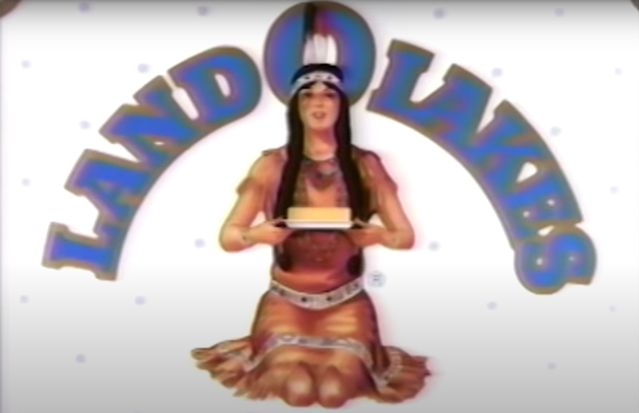 It’s official: after 100 years, dairy company Land O' Lakes has finally removed the Native American woman from their packaging. “Mia,” the name for the illustration on the cover — which has also often been referred to as the "Land O’ Lakes butter maiden" — had turned into a racist stereotype over the years that many agree had no place in the 21st century.

The packaging has had various iterations over the past century. Although the Minnesota-based co-op was founded in 1921, Mia didn’t make an appearance on their products until 1928. In the 1950s, an Ojibwa tribe artist, Patrick DesJarlait, remade the image of Mia. Although this was a step up for sure, it did not change the fact that Land O’ Lakes was appropriating Native American culture on their packaging, and misinterpreting the culture at that.

Some have argued that because Land O' Lakes comes from Minnesota, the illustration was meant to represent the Indigenous people that live around the Great Lakes region. But as can be seen by her stereotypical braids, headdress, and outfit, that just wasn’t the case. As H. Mathew Barkhausen III noted in Seventh Native American Generation Magazine, “From the blue-eyed woman in 'Indian Princess' garb on the door of the trucks of the "Navajo" trucking company to the 'Indian princess' depicted on the Land 'O Lakes butter packages, stereotypical images of Native Americans are everywhere….Many corporations add insult to injury by not only appropriating Native images and traditions, but scrambling them in the process.”

The new logo features a vast, open lake surrounded by everglades with a large “O” taking the place of the Native American woman and an added nod to the farmers who co-own the company. Land O’ Lakes did not directly address the controversy that came with their previous image. The company's President and CEO, Beth Ford, stated, “As a farmer-owned co-op, we strongly feel the need to better connect the men and women who grow our food with those who consume it.”

DesJarlait’s son, Robert, added, “I’m sad to see it go, but I can understand why it’s gone. We live in a politically correct time, so maybe it was time to get rid of it. It certainly devolved into a stereotype.”

There is a long and storied history of companies, sports teams, and schools appropriating Native American figures on their packaging and with their mascots. By doing so, they not only stereotype Native American culture but erase the suffering Indigenous people experienced by the hands of colonization. While the step Land O’ Lakes took to put an end to that practice was great, there is still a long way to go. As North Dakota state representative Ruth Buffalo stated on the topic, we must “keep pushing forward to address the underlying issues that directly impact an entire population that survived genocide.”

Tags: Land O' Lakes , Stereotyping , Cultural Appropriation , Indigenous , Native American
Support Feminist Media!
During these troubling political times, independent feminist media is more vital than ever. If our bold, uncensored reporting on women’s issues is important to you, please consider making a donation of $5, $25, $50, or whatever you can afford, to protect and sustain BUST.com.
Thanks so much—we can’t spell BUST without U.