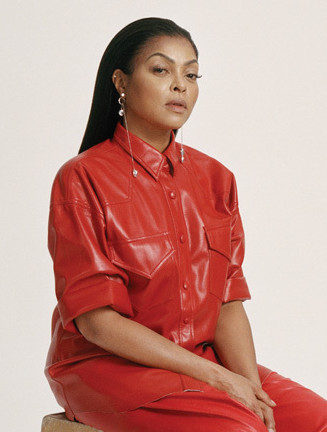 For a score of reasons ranging from socioeconomic disparities to an all-out stigma against mental illness, Black people are least likely to seek professional help for anxiety, depression, and more. Now, in this time of anxiety and uncertainty, actress Taraji P. Henson is setting out to offer assistance to those in need who may be generally reluctant.

In 2018, Henson founded the Boris Lawrence Henson Foundation, named in honor of her father who served in the Vietnam War. According to the site, Henson’s father—as a result of his time and experiences in the war— returned home and suffered with mental challenges. Henson previously spoke with BUST about her foundation, stating that it was born out of necessity after she and her son faced their own personal traumas. Thinking of her son trying to grapple with his emotions without a proper outlet propelled her to expand and advocate for her community at large.

In an acceptance speech last year with Variety, in which Henson was named one of the magazine’s women in power, Henson stated that the vision of her non-profit organization was to “eradicate the stigma around mental health in the Black community by breaking the silence and breaking a cycle of shame.” Through her organization, Henson’s objective is to change the ways in which Black people feel towards admitting they need help and offer a safe place in which they may do so.

Henson launched the campaign in a post shared to her social media. In the clip, Henson makes note of the very real fact that accessibility to treatment doesn’t come easily to everyone, cognizant that many cannot afford a therapist even though they may need it — especially right now. As a result, Henson has come up with an easy and accessible way offer aid. By texting the word NOSTIGMA to 707070 and donating however much one can, free virtual therapy will be provided to African Americans who are unable to afford such help, especially during this heightened time.

Henson stated that the campaign was for “the underserved communities experiencing life-changing events related to, or triggered by, the COVID-19 pandemic.”

As the United States struggles to roll out effective testing and accumulates data on the spread of COVID-19, certain findings are coming to light about which demographics have been hardest hit. The nation’s Black population is dying overwhelmingly in disproportionate numbers. A look at the numbers is startling: in Illinois Black people only account for 14% of the population, yet account for 30% of cases and 41% of deaths in the state. In Louisiana, Black people make up 33% of the state’s population, but account for 70% of deaths.

This pandemic is highlighting a great deal of systemic shortcomings of the nation. The socioeconomic factors that have oftentimes been overlooked or denied entirely are being called to attention to explain why there is such an alarming contrast in how this virus is affecting the Black community. Many people of color are not able to work from home as they are employed in positions that are deemed essential work, which in turn lends them a higher risk of becoming infected with the coronavirus.

Data like this can be overwhelming to absorb on a daily basis. As the nation looks to prioritize mental health, campaigns such as Henson’s will help to alleviate the fears for a community that has been hit the hardest.

It's "difficult for the black community to even speak up about mental illnesses or mental health because of the stigma... I had to do something." pic.twitter.com/dlRaqHuM2e

Taraji P. Henson On Committing To Her Relationship, Ignoring Her Age, And "Seeing Her Money

Cardi B Pledges To Donate $1,000 An Hour To Those Affected By COVID-19