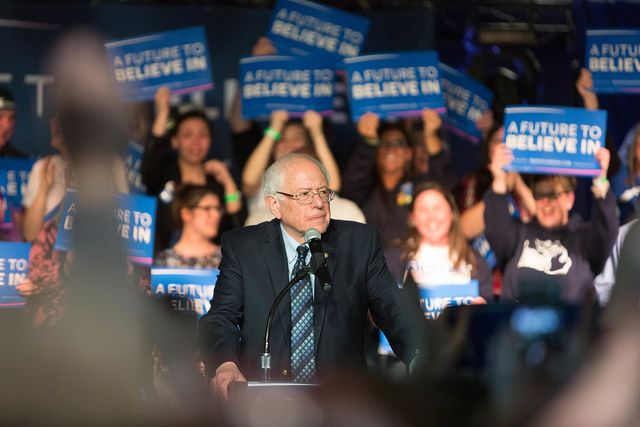 Black, Native American and Alaskan Native women are three times more likely to die during childbirth than white women. Famous Black women like Beyoncé and Serena Williams have detailed their experiences about how dangerous it can be giving birth as a black woman. Similarly, NBC reported that an Alaskan Native activist, Stephanie Snook, was going to be involved in their article about maternal mortality and died in the process of the article. Her twins also died a week later.

While there is the sexist belief that women are whining about their pain and exaggerating, there is also the racist belief that black and indigenous women are stronger and feel less pain so they don’t need as much pain meds as white women. It is because of these dangerous and absurd assumptions that medical professionals are not giving enough respect and attention to Black and Indigenous women, especially during childbirth.

Sanders has been discussing race disparity when it comes to health care for a long time and has specifically talked about black maternal mortality crisis. He insists that it must be changed. Elizabeth Warren had a similar plan to address the attack on reproductive rights and the Black maternity mortality crisis. Joe Biden discussed the important topic of the maternality mortality crisis infrequently, only mentioning it on his page in a quick sentence.

“There has been no time in the history of this country when women, especially Black women, have had the reproductive freedom and justice that they deserve. In my administration, that will finally change.” At the rally, Sanders said, “We must once and for all put an end to the unacceptable crisis of Black maternal mortality, and ensure every woman in this country—no matter where they’re from—has the basic right to quality healthcare.”

“When I am in the White House, we will fight back against the Republican assault on abortion rights across this country and defend a woman's fundamental right to control her own body. As president, there will be no doubt that in the United States of America, abortion is a constitutional right. Period.”

The Sanders campaign continued in a statement, "The plan will be implemented in tandem with a comprehensive, progressive agenda to end racial disparities in our economic, criminal justice, environmental, education, and healthcare systems."

To address the GOP’s attacks on reproductive rights, Sanders plans to repeal the Hyde Amendment and make all reproductive health services free at the point of service. He will expand funding for Planned Parenthood, Title X and other women led health organizations. He plans to protect women's health, ensure access to contraception, and the availability of a safe and legal abortion.

We are glad that the issue of reproductive rights and the black maternity mortality crisis are finally being taken seriously and we hope that this means that change will actually be made for the future. This is an epidemic and Black and Indigenous women are in danger.

Elizabeth Warren Drops Out Of The Presidential Race