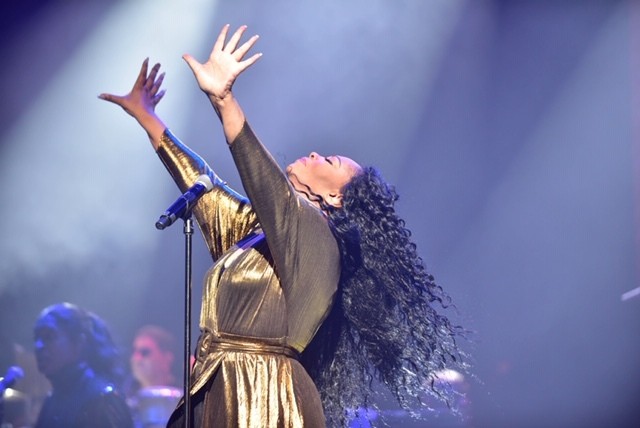 I’m a long-time live music fan and I have the scars to prove it. The first Lollapalooza festival in 1991 was so hot, Corey Glover from Living Colour doused the crowd with a fire hose. I caught the spray full in the face and was knocked painfully to the ground into a sea of stampeding Doc Martens. And at the 1993 HFStival at RFK Stadium in Washington D.C., I moshed to the front row during Iggy Pop’s set, only to be crushed against the retaining wall by a huge crowd surge once INXS took the stage. Security had to drag me over the wall before I lost consciousness, and I remember lying on a medical cot under the stage while Michael Hutchence’s distorted vocals boomed over my head.

My love for live music hasn’t diminished in the last 25 years, but my tolerance for music festival mayhem certainly has. I don’t want to endure abject human suffering just to see a great group of bands. Which is why my experience aboard the Celebrity Infinity for the Ultimate Disco Cruise—a floating music festival that took attendees from Miami to Key West to the Bahamas and back from February 10-15—was such an absolute game-changer for me.

To my delight, the retro-soul lineup assembled on the ship was as good as anything I’ve endured heatstroke for on land. Over the course of five days, I saw stellar mainstage performances by the Commodores, the Jacksons (Jackie, Tito, & Marlon to be exact), Sister Sledge, KC and the Sunshine Band, and Shalamar Reloaded featuring Jody Watley; as well as a series of high-energy afternoon showcases dominated by amazing women from the disco era, including Anita Ward, Maxine Nightingale, France Joli, Linda Clifford, Norma Jean Wright, and my absolute favorite—Martha Wash, the former Weather Girl with a voice as big as the ocean itself. 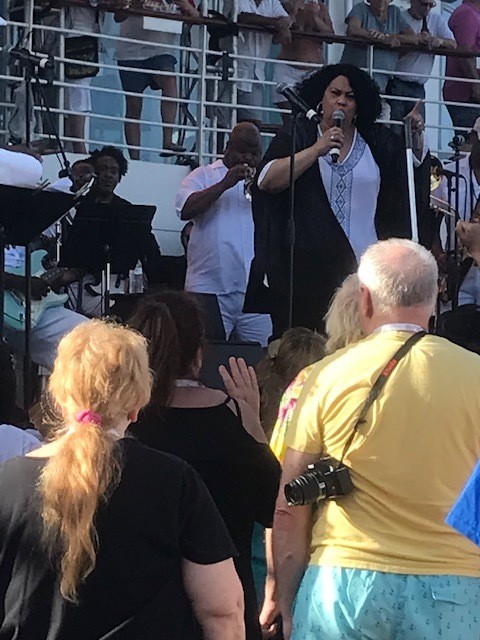 Martha Wash on the Pool Deck

It was the promise of these great performances that got me on the boat. But what I never anticipated was how luxurious a concert-going experience like this could actually be. There wasn’t a bad seat in the ship’s Celebrity Theater where all the main concerts took place. Every row was lined with plush banquettes punctuated with little drink trays. You could sit or stand, dance at your seat or jump up and down and grasp the hand of the lead singer down at the lip of the stage. There was plenty of room for everyone in a relaxed, climate-controlled atmosphere where handsome waiters were always standing by ready to refresh drinks. (By the end of the cruise, I didn’t even need to ask for my Diet Coke—it just arrived!) 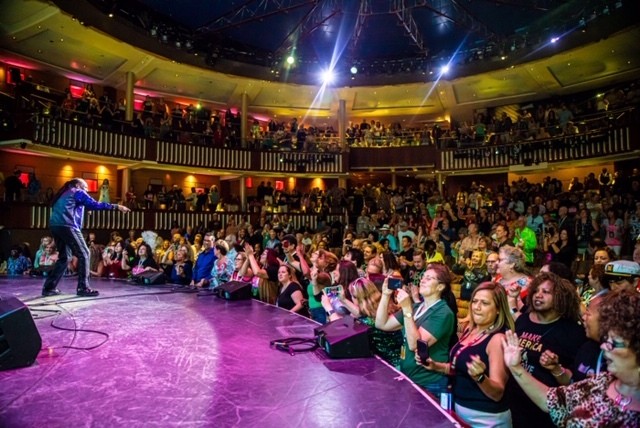 The Commodores at the mainstage Celebrity Theater

And that was just one of the venues. During the day, the great divas of disco performed out on the pool deck where the main swimming pool had been covered over to create a fun open-air concert hall. Sun worshippers could stretch out on chaise lounges and enjoy the tunes with frosty daiquiris and veggie burgers from the BBQ grill in hand. Amateur dancing queens spun and twirled with their pals in the open area in front of the stage. And the aquatically inclined took it all in while soaking in hot tubs or floating in the lap pool. 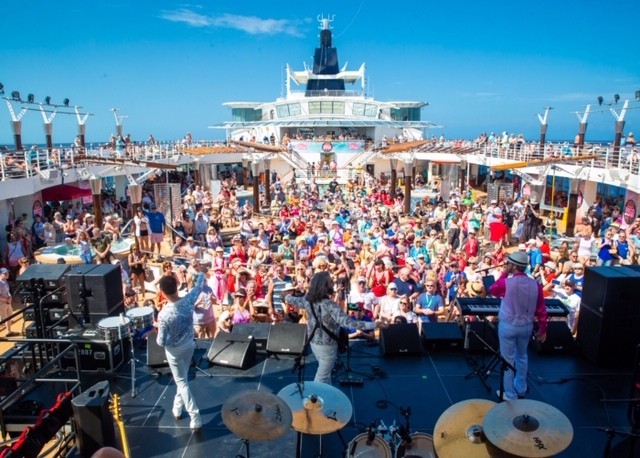 Once the mainstage shows had concluded and a fancy dinner had been served in the formal dining room, that’s when the real decision-making process for music fans began. Every night there were first-rate tribute bands covering hits by ABBA; the Bee Gees; Earth, Wind, and Fire; and more, doing late-night sets. The karaoke bar was bumpin’. And celebrity DJs including Nicky Siano, Bob Pantano, and Felipe Rose (of the Village People) revived Studio 54 in a dining room tricked out with a light-up Saturday Night Fever floor beneath a spinning disco ball. 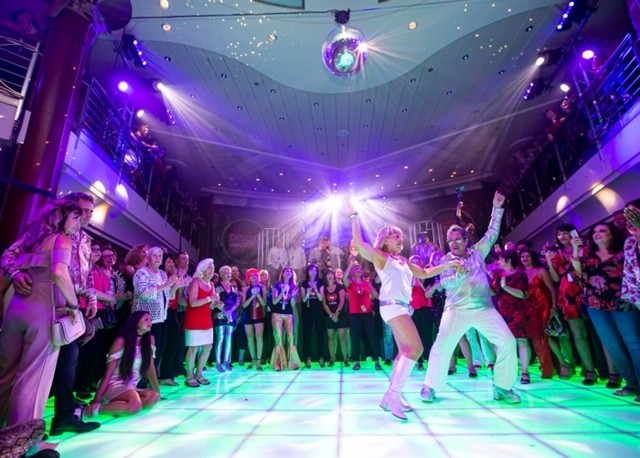 Meanwhile, the midnight buffet was its own amazing scene where fans could easily meet their idols post-show. (I’m a shy creeper, so watching Debbie Sledge eat salad in an oversized hoodie and snapping a pic of Marlon and Tito Jackson eating oatmeal together at dawn were highlights for me.) Foxy session musicians were always hanging out there swapping war stories with other bands over slices of pie in this sprawling space, and more than a few love (or lust) connections were made before closing time. 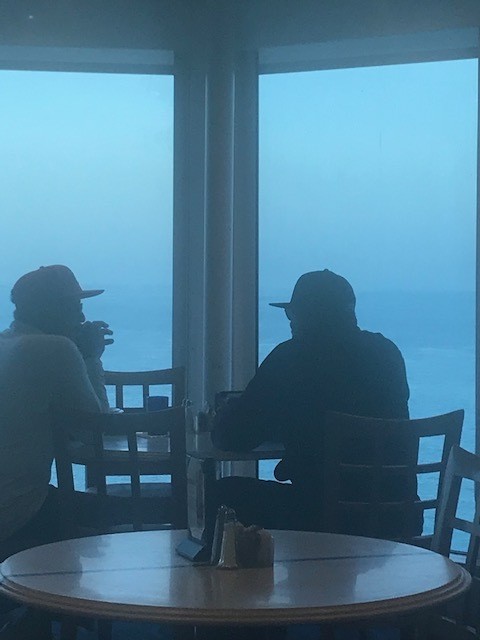 Which led to possibly the most luxurious aspect of the Ultimate Disco Cruise. All my life, the high of going to a music festival was always immediately tempered by the crushing despair of trying to exit a venue en masse. Lining up to clear the grounds, hours of traffic to leave parking areas, or risking life and limb to jam myself into late-night mass transit, followed by more walking or driving or whatever to get home after a show. It all eventually became too much to endure. But in this miraculous musical Shangri-La at sea, once the last encore was played and I had left it all on the dance floor, a fluffy hotel bed overlooking the ocean was just an elevator ride away every night. It was the greatest feeling ever to rock till I dropped, crash in my room immediately afterward, and then get up in the morning feeling refreshed and ready for more. 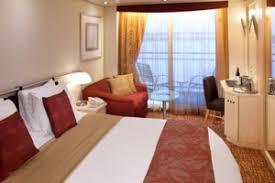 Heaven after a long night of bustin' moves

For a music fan like me, it was a level of pleasure I didn’t think was even possible. And I can’t wait to do it all again. 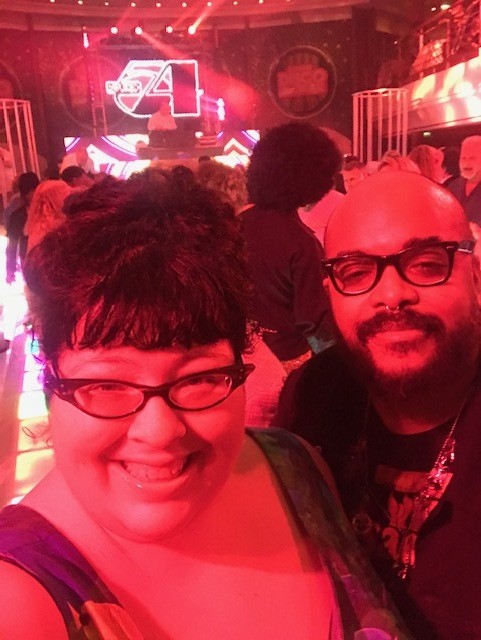 The author and her paramour on the dance floor

The Ultimate Disco Cruise is a production of StarVista Live, a company that specializes in curating music festivals at sea for multiple genres, including The 70s Rock & Romance Cruise, The Country Music Cruise, The Flower Power Cruise, The Southern Rock Cruise, The Soul Train Cruise, and the Malt Shop Memories Cruise. Info for those cruises is available at StarVistaLive.com.

Tickets for the next year’s Ultimate Disco Cruise, sailing from February 22 - 27, 2021, are already on sale and headliners will include Kool & the Gang, Expose, Bonnie Pointer, and A Taste of Honey. Find out more at UltimateDiscoCruise.com. 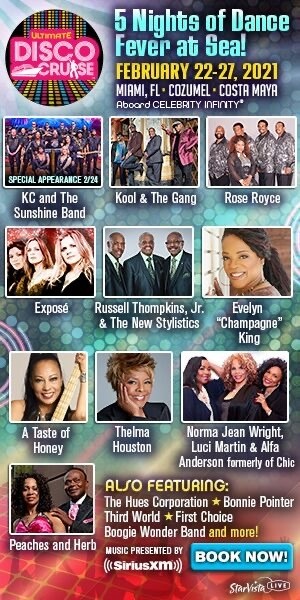