Assemble Your Crew: N.Y.C.’s Wildest New Ladies’ Night Is Brunch With A Side of Sausage 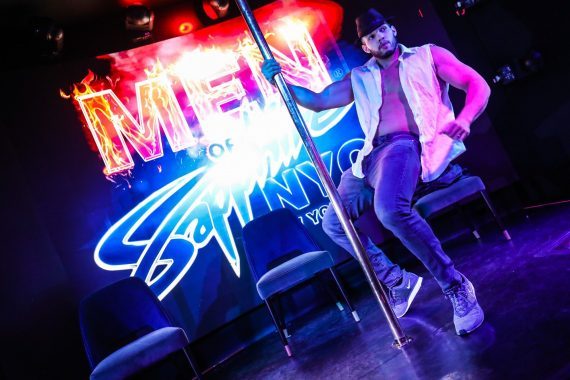 The pairing of exotic dancers and breakfast food isn’t new. Known colloquially as “legs ‘n’ eggs,” traditional strip clubs like the infamous Foxy Lady in Providence, RI, have been offering up a morning breakfast buffet to draw early birds to their female dancers’ hot cakes for decades. But now, Manhattan’s Sapphire 39 gentleman’s club ( 20 W 39th St, New York, NY, 10018) has recruited a few good men to add some spice to New York’s brunch scene—and women who may never have set foot in a strip club before are experiencing this titillating tradition for the first time.

When they launched in January, the Men of Sapphire cordially invited the staff of BUST to join them for one of their first performances of Men & Mimosas—currently Manhattan’s only male brunch revue—presented on Sundays from 1 – 6 pm. In the name of gender equity and investigative inquiry, four of us accepted the invite, and suffice it to say, we stayed the full five hours and came home smelling like Paco Rabanne.

Surrounded by tables of gal pals—some celebrating birthdays, others doing the bachelorette thing, and a few who appeared to be dancers themselves unwinding after a long Saturday night—we sipped on flutes of champagne topped with apple cider; nibbled on sweet and savory brunch offerings that included omelets, shrimp and grits, and pretty tartlettes; and quickly learned that we were not being bound by the rules that usually govern strip club audiences. 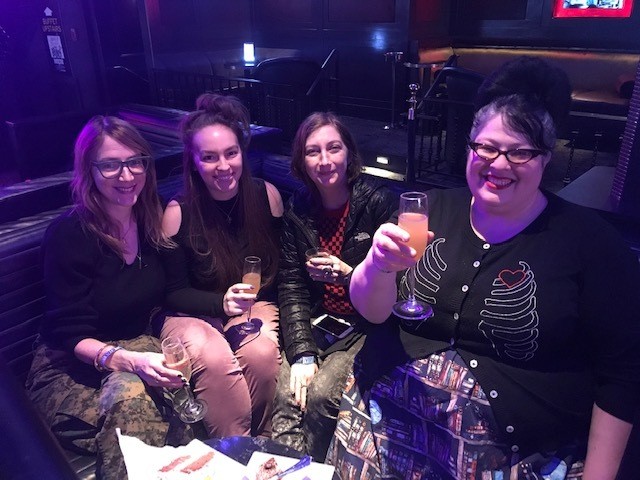 For one thing, we were allowed to take pictures and video. (Our feeds were poppin’ and our online pals were living for it.) Something else that caught us off guard was how much physical contact we all ended up having with the Men of Sapphire once they started making their way into the crowd in skimpy duds evocative of a variety of professions—cop, cowboy, leather daddy, soldier, and a Dominican dude built like a He-Man action figure called “Papi.”

Though none of us bought lap dances, we each had a discreet bundle of ones on us to make it rain when we felt moved, and these guys did the most to earn them. They laid fully on top of us in our booth; placed our hands on their baby-soft pecs, abs, and butts; ground their crotches against us in simulations of sex that increased in intensity as the five hours wore on; and whispered sweet (and salty) nothings into our ears. The option to get more one-on-one attention in a private room was offered multiple times, but our crew wasn’t looking for that kind of action, especially when so much flesh was being pressed on us already in the main room. 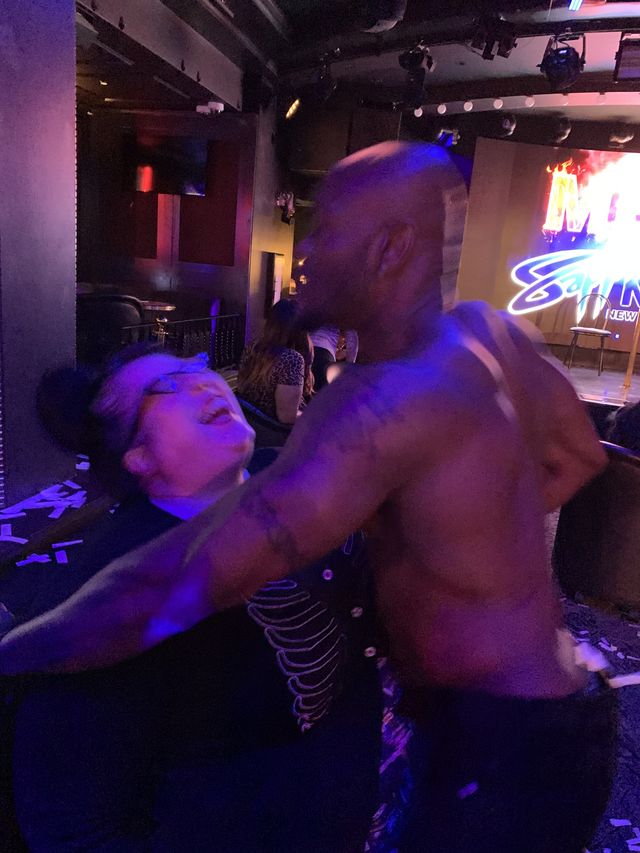 The choreographed dance routines and strip teases being passed off as an “All-Male Revue” on stage were not nearly as polished as the performances being peddled by the dancers in their patrons’ (matrons’?) individual booths, but that’s OK. Their awkward wriggling out of tight jeans and earnest attempts to incite some kind of Magic Mike-style frenzy by body rolling along to Pony somehow made the dancers more charming and less threatening. And this is good, because not all women are psychologically ready for a strange man to just get on top of her and start humping her leg, even if that is the context of the space she’s entered. 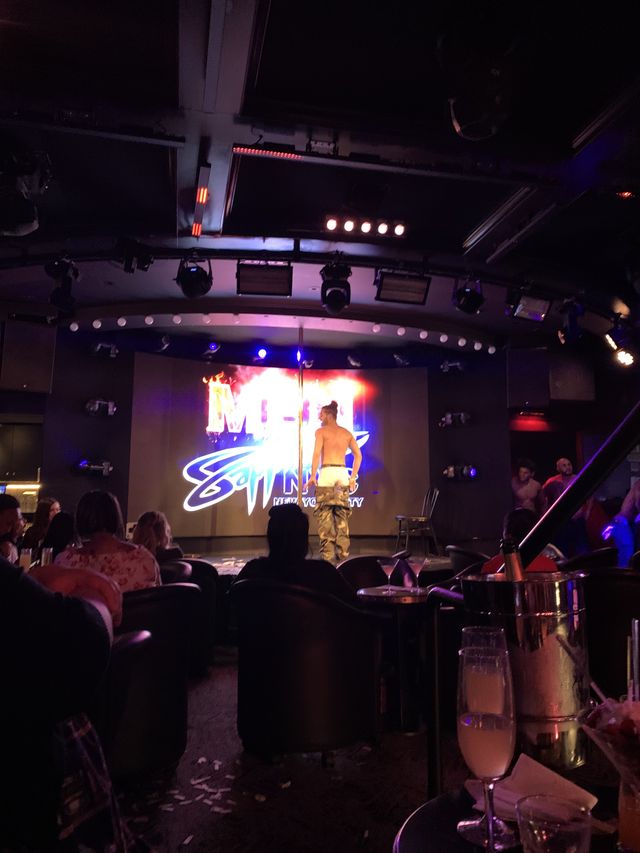 Which brings me to the question we were all left asking ourselves at the end of our five-hour “brunch.” How does an operation like this go about turning women on for profit when so many of us are so particular about what we want from this kind of encounter? The bachelorette party was obviously delighted when the leather daddy started banging his tight trousers against the bride-to-be. But when the same gentleman grabbed my face unexpectedly and whispered in my ear all the unspeakable things he wanted to do to me, I felt an autonomic spike of adrenalized fear shoot through my body, even though I knew exactly where I was and what I had agreed to experience. There is no one-size-fits-all way to turn women on, which may be why this is the only experience of its kind in N.Y.C. But I think it’s good that women are being offered this option, even if at times the Men of Sapphire lack subtlety. 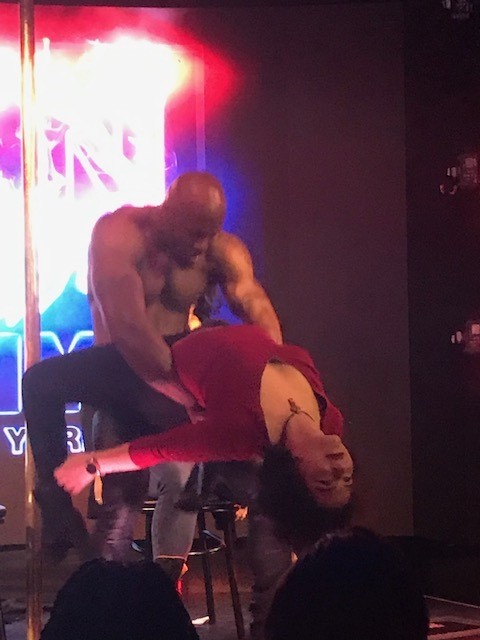 At the end of the day (or in this case, afternoon) there’s going to be a learning curve, both for the dancers learning to cater to a female brunch crowd, and for the clientele experiencing this kind of service for the first time. And for the most part, Sapphire’s Men & Mimosas brunch creates a wild sexy space to bond with your besties and heat up your social media feed. 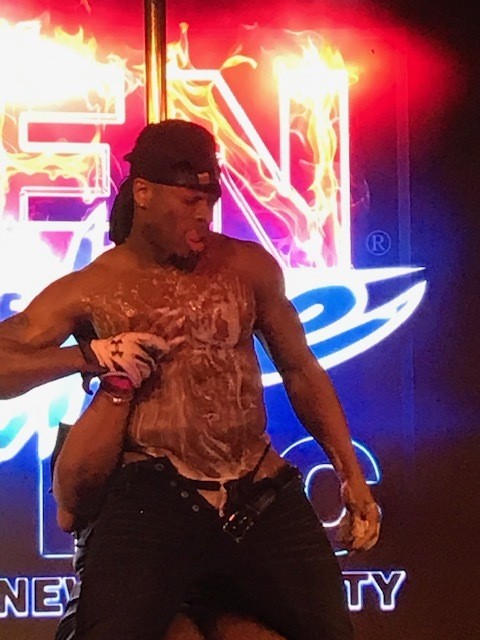 Tags: Sapphire 39 , Men of Sapphire , Men and Mimosas , Strippers , Male Strippers , Legs and Eggs , brunch , New York , bachelorette party
Support Feminist Media!
During these troubling political times, independent feminist media is more vital than ever. If our bold, uncensored reporting on women’s issues is important to you, please consider making a donation of $5, $25, $50, or whatever you can afford, to protect and sustain BUST.com.
Thanks so much—we can’t spell BUST without U.