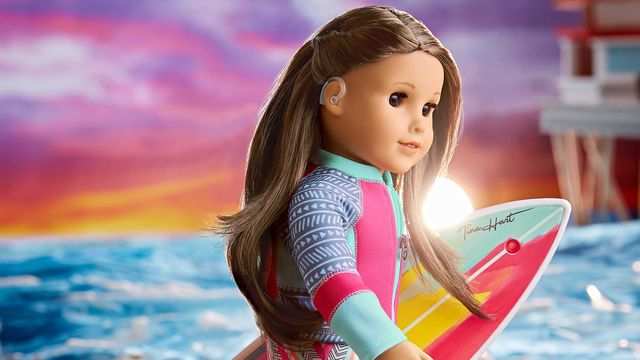 Members of the disabled community often rank among the most invisible groups in society. People with physical handicaps rarely win roles in movies, and they make it to the toy aisle even less frequently.

Recently, however, American Girl shattered stereotypes with their doll of the year, Joss. This surfer girl doesn't let a hearing impairment stop her from living her dreams. With her aid tucked in, she's ready to catch a wave — and raise awareness for others with challenges.

At 10 years old, Joss Kendrick is a surfer and a cheerleader from Huntington Beach, CA. She was born deaf in her left ear, but she does have limited hearing on her right side that she enhances with a hearing aid. She doesn't let congenital hearing loss get her down, though. Her character inspires other girls to see what can happen if they go all in on their dreams.

American Girl announced that they would donate $25,000 of the proceeds to support HLAA. Shoppers can also contribute to the organization directly through the American Girl website.

Though this doll is a first, American Girl is no stranger to inclusivity. Previous dolls have come along with stories of learning disabilities and a stutter, and one former model came in a wheelchair. Hopefully, though, Joss's designation of Girl of the Year will help young girls who enjoy the dolls and face similar challenges to feel that there are no limits to how far they can go in life.

Barbara Kelly, executive director of the Hearing Loss Association of America (HLAA), feels that this doll will help other children with disabilities feel more confident. Some kids who have to wear aids feel stigmatized due to their use. They may endure bullying and ostracism from other children.

Many districts don't do enough to raise awareness about the challenges faced by young people with disabilities. Many reasons exist for the oversight, but it falls on parents to teach inclusivity and sensitivity. In today's hectic world, that puts an enormous burden on those who already struggle.

Families of disabled children often face considerable financial and interpersonal stress due to the struggles of caring for their young ones. For example, many health insurance companies do not cover hearing aids, meaning that parents may need to come up with thousands of dollars for a proper model.

And in the classroom, hearing struggles can significantly impact learning progress. If a child can't hear what the teacher is saying when they lecture, they may lose interest and their grades may begin to suffer. While adaptations like seating the child near the front of the class can help, they can also make someone feel isolated and different from their peers.

Children with hearing loss, as well as other disabilities, report experiencing depressive symptoms more often than their classmates, too. Frequent frustration in trying to access educational parity and inclusion in activities can lead to despair. These youth need inspiration in pop culture that tells them they can accomplish their dreams and goals. For impressionable young people, characters like Joss can actually do a lot to help young people feel empowered and included.

Parents and teachers, even society at large, all play a role in helping people with disabilities lead their best lives. The following strategies can help promote inclusion.

This practice has less to do with being politically correct and more to do with sensitivity and respect. Think about phrases like, "that person has the mentality of a 2-year-old." How would you feel if you were the parent of that child, or if you were to have heard that about yourself as a child? Be sensitive, gentle and kind in the way you speak of others, especially around children.

Your child might not know how to react when they see someone else using crutches for the first time, for example. Turn this event into a teachable moment by inviting the newcomer to play with you. Once your child begins interacting with a new friend, they'll see past the physical differences.

Discuss how people have differences, and talk about ways to celebrate what makes us unique. Brainstorm ideas for how to deal with bullies when your child encounters them at school.

Kate Harveston is a young political writer from Pennsylvania. She enjoys writing about social justice issues and human rights, but she has written on a wide range of topics, including health, technology and music. If you like her writing, you can follow her blog, Only Slightly Biased. Follow her on Twitter, Google+, and Facebook.
Tags: American Girl , deaf , disability , doll , bullying , children