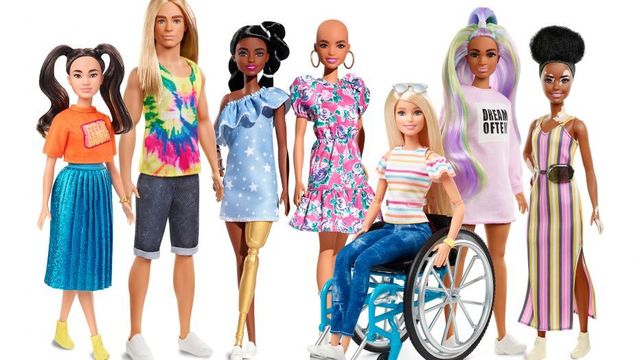 America’s favorite fashion doll, Barbie, just made major strides on the road to representation and inclusivity. That’s right, creators of the iconic doll, Mattel Inc. just announced that their 2020 Fashionista’s line will feature a whole new array of diverse and body-positive dolls. This line will feature bald Barbies, dolls with vitiligo and prosthetic limbs, a Barbie in a wheelchair and a Ken doll with long luxurious hair, just to name a few.

While the blond bombshell herself has been serving looks since as early as 1959, we have to be real, Barbie and her girl squad were not always the most inclusive group.The first black Barbie doll, Christie, wasn’t released until nine years after Barbie’s initial launch. Other Barbie dolls of color were not introduced until much later, and were honestly few and far between when you’d make a trip to the local Walmart or Toys R Us to pick out a new doll.

Eventually, however, Barbie and the creators behind her began to evolve for a new era that has led Barbie to the incluive, feminist icon she is today. In 1985, the “We Girls Can Do Anything” campaign launched. You remember that, right? That’s why you had Barbies that were not only fashion plates, but astronauts, doctors, ballerinas and any other occupation you can think of, for that matter. In ’92, Barbie ran for president. In 2015, Mattel came out with their “Sheroes” line, which made some of today’s feminist celebrity icons into minatures. Three years later, they would create their #MoreRoleModels campaign, which turned some of history's rebel ladies like Frida Khalo and Amelia Earhart into dolls.

Though monumental steps were made, it wasn’t until in 2016 when Barbie said goodbye to the stereotypical one size fits all body type she had sported for nearly 60 years did she really began to breakground. Mattel came out with curvy, petite and tall Barbie dolls to better represent the various shapes and sizes womxn of the world come in. But it didn’t just stop there. It seems that now, Mattel is on a mission to champion inclusivity so that all children that want to play with Barbies can see themselves and the world around them better represented.

This new line of inclusive Barbies comes just a few months after Mattel launched “Creatable World,” a line of gender-neutral Barbie dolls that come with various clothing items and wigs for kids to choose from so that their dolls can reflect their identities. With this new update, Barbie now comes in six different body types, nine skintones, 10 hair styles and 11 hair colors. Looking back to when Barbie first started out, these changes are absolutely revolutionary. Now, kids can play with Barbie dolls and see themselves, their friends, their parents, and the world around them represented right in their hands. While some steps can still be made in the Dream House to be fully inclusive of all kinds of people, we are totally here for these new diverse additions. Way to go, Barbra!

Tags: Barbie , Barbie Dolls , Inclusivity , Diversity , Inclusive , Feminism , Body Positive , Representation
Support Feminist Media!
During these troubling political times, independent feminist media is more vital than ever. If our bold, uncensored reporting on women’s issues is important to you, please consider making a donation of $5, $25, $50, or whatever you can afford, to protect and sustain BUST.com.
Thanks so much—we can’t spell BUST without U.