What You Need to Know for the 2020 Women’s March

Tomorrow, January 18, is the fourth annual Women’s March in Washington D.C. Around the country, people are marching to display support for women and minorities and resistance against President Trump at sister marches. The principles and mission of the Women’s March are to support, enact change, provide intersectional education on a wide range of issues, and dismantle systems of injustice through nonviolent means.

Protestors will meet at Freedom Tower for line up at 10 AM, and the march will kick off at 11 AM following the guided path. They recommend you bring a small backpack for water and snacks, and wear comfortable shoes. 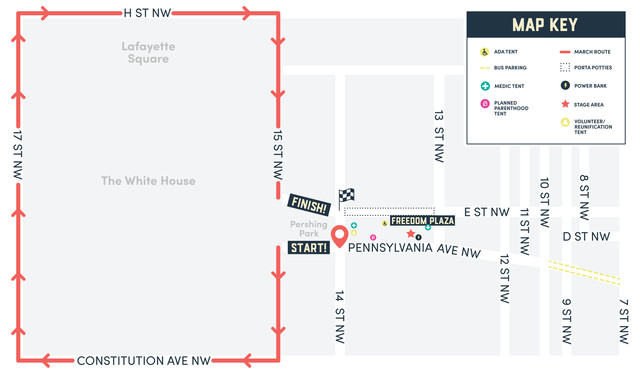 The Chilean protest group, Lastesis, will lead marchers in songs and chants, including the global feminist anthem, Un violador en tu camino (A Rapist in your Path). Protestors are encouraged to learn the lyrics and dance.

However, unlike marches prior that just had speakers, this march has been preceded by a week of action. The programs were designed to address the roles of women in society and give feminist leaders around the globe a space to discuss these issues. So far, there have been events including “Why Women Lead on Climate Change” and “Reproductive Rights, Health and Justice & The 2020 Landscape.” There are also future events on the day of the march and the next day, like “Fourth Wave Drag Brunch."

New York City will also be hosting a women’s march on Saturday called “NYC Women’s Unity March & Rally: Rise and Roar 2020” as part of the Women’s March Alliance. Lineup will start at 10:30 AM and rally at 11 AM at Foley Square and Columbus Circle, and both groups will meet at Times Square at 3 PM.

This year’s march is set to be the most important one so far. According to Women’s March, “Three years of marching, training, organizing, and building power – it’s all been leading up to this. In 2020, we have the chance to strengthen the movement we started three years, and to unite together in the face of continued attacks on our bodies, our rights, our immigrant communities, and our planet. This year, we aren’t just marching.”

RSVP now for the D.C. Women’s March this Saturday.

Everything You Need To Know About The Women's March 2019

Tags: Women's March , protest , feminism
Support Feminist Media!
During these troubling political times, independent feminist media is more vital than ever. If our bold, uncensored reporting on women’s issues is important to you, please consider making a donation of $5, $25, $50, or whatever you can afford, to protect and sustain BUST.com.
Thanks so much—we can’t spell BUST without U.