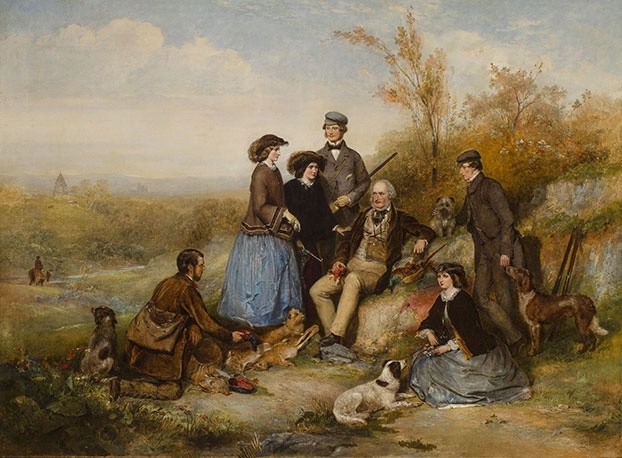 When one thinks of a 19th century shooting party, one usually imagines well-to-do sportsmen in plus-fours and tweed caps, accompanied by their loaders, their beaters, and—of course—their sporting dogs. However, according to an article in the October 29, 1880 edition of the Portsmouth Evening News, even the best spaniels and retrievers could not compete with the “great skill” of a sporting cat. As the article explains:

“Dogs cannot climb trees to hunt birds, whereas cats find no difficulty in following game from branch to branch.”

As an example, the article references a story previously published in the New York Times which reported the exploits of a sportsman in America who routinely went hunting with only a cat to accompany him. It reads in part:

“He goes forth with nothing but a game-bag and with his faithful and accomplished cat trotting by his side. When he reaches a forest where the squirrels abound the cat hunts eagerly, with its nose on the ground, until it scents a squirrel. Following it to the tree where the squirrel makes his home, the cat nimbly climbs the tree and catches the game.”

In some cases, the squirrel would elude the cat for a time, leaping from “tree to tree.” The cat would follow in hot pursuit up the tree and along the branches and, after a “brisk chase,” the squirrel would ultimately be “overtaken and seized.” Occasionally the squirrel opted to “take refuge in a hole” instead of fleeing into the trees. In this scenario, the cat would exercise extraordinary patience, sitting by the hole until, at last, the squirrel “put his head out” and was caught.

This particular sporting cat did more than merely kill the game. He also fulfilled the role of a faithful retriever. As the article reports:

“The cat also acts as a retriever, bringing the captured game to its master; and in course of a day’s hunting, if the sky is overcast and the squirrels rise freely, the hunter usually fills his game-bag with fifty or sixty fine grey squirrels. No dog could rival the success of this cat, and in fact it is a very rare thing for a dog to catch even a single squirrel.”

Cats and Sparrows by Byeon Sang-byeok, 1730.

The conclusion drawn from this example is a bit of a stretch (and one that we know today did not come to pass):

“The New York Times thinks that the cat will ultimately supersede the dog as an assistant to sportsmen.”

What of British sporting cats? The same article in the Portsmouth Evening News references a British correspondent who had written on the subject for the London Evening Standard. This correspondent relates the story of an “aged cottager” who had once been his neighbor. Their two cottages had been separated by a low, boundary wall. He writes:

“I frequently heard, when in my garden, the discharge of firearms in the direction of the orchard; but I attached no importance to the circumstances, thinking it was my neighbour’s way of preventing the depredations of small birds on his crops.” 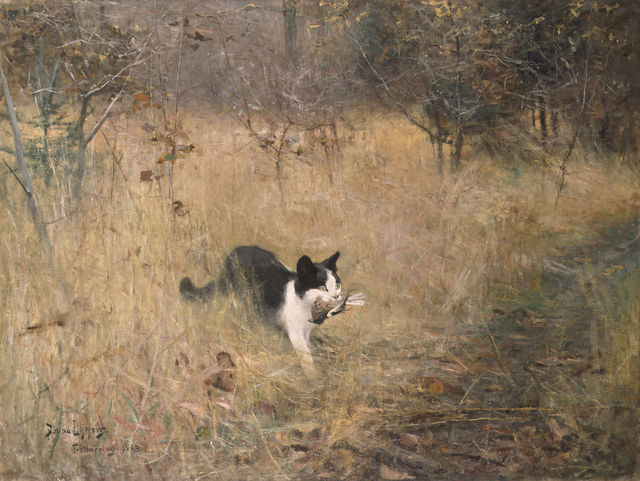 The correspondent reports that his neighbor spent a great deal of time near the boundary wall between their properties. He “expended his ammunition” on blackbirds and thrushes, the majority of which, when shot, fell onto the correspondent’s side of the wall. As the correspondent writes:

“There appeared to be no doubt that to possess himself of them he must commit a trespass. Accordingly I looked for, but could never find, evidence of trespass; and I failed to understand how in the long grass, which was more luxuriant than is usual in orchards where stock is kept, he contrived to secure his quarry. It may be also mentioned that I never found a dead bird, although I made frequent search, and this circumstance caused further mystification.”

In time, the correspondent’s son discovered exactly how it was that the aged cottager managed to gain possession of the birds he had shot. The correspondent explains:

“He had trained a cat to perform the duties of a retriever. Puss would spring from her sheltered position on the wall, and in a series of bounds approach the spot where she had seen the bird fall, seize it, and bring it to her master.”

An 1880 edition of the London Evening Standard provides us with another example of sporting cats in one of their letters to the editor. A fellow who signs himself simply as “A Cat’s Friend” writes that he has trained his three cats as gundogs. He states:

“If I take my gun in hand they exhibit symptoms of delight, and will retrieve a small bird as well as their constant companion, my Irish retriever from whom they always seek protection.”

Despite the entertaining anecdotes in the Portsmouth Evening News, the New York Times, and the London Evening Standard, the jobs of sporting spaniels and retrievers were in no danger from an overabundance of highly skilled sporting cats. The farmer or “aged cottager” with his trusted squirrel-hunting/bird-retrieving feline was the exception rather than the rule. Nevertheless, it does make one wonder. What would it be like to go hunting with a pack of cats instead of dogs? Chaos, I suspect. What do you think? 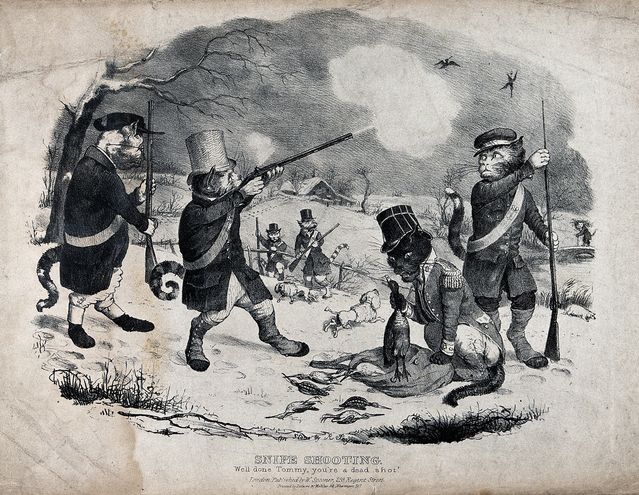 Thus concludes another of my Friday features on Animals in Literature and History. If you would like to help a cat in need, either by providing a home or by donating your time or money, the following links may be useful as resources:

The Rats, Cats, And Mice Of 1860s Ladies' Hairstyles

Tags: Victorian , sporting cats , cat , fierce felines , animals
Support Feminist Media!
During these troubling political times, independent feminist media is more vital than ever. If our bold, uncensored reporting on women’s issues is important to you, please consider making a donation of $5, $25, $50, or whatever you can afford, to protect and sustain BUST.com.
Thanks so much—we can’t spell BUST without U.