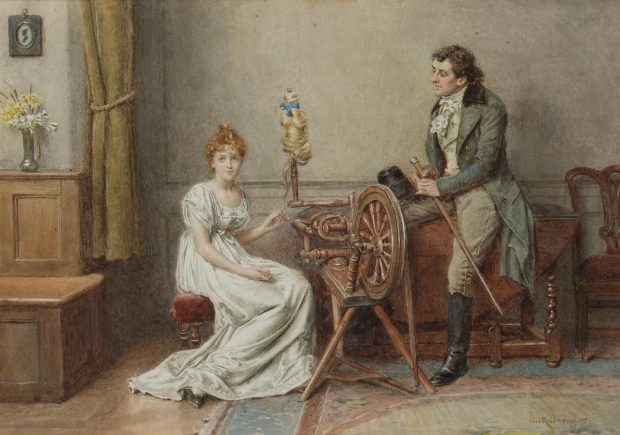 Recently, while researching, I came across a “Spinster’s Numeration Table” printed in the 1837 edition of the New Monthly Magazine. This table lists out the various ages of an unmarried woman and corresponds them to certain characteristics. It is meant to be humorous, but—as with all humor of this sort—there is a grain of historical truth to be gleaned from the descriptions. The table gives us insight into how spinsters were viewed and at what age unmarried women were deemed to be past their prime.

According to the New Monthly Magazine, it was from the age of seventeen that “the numerals figuring the age of our spinster friends become emblematical of their persons and qualifications.” With that in mind they provide the following table for the benefit of the male sex so that each gentleman “may institute memoria technica of his own.” I’ve included the Spinster’s Table below in its entirety.

17 Years: Vast notions of a love-match. Enthusiastic for Bayley’s songs and pastoral poetry.

18 Years: Complexion and spirits high. Addicted to archery, the ‘Comic Annual,’ and ‘Charming Women.’ Willing to accept every partner that offers in a ball-room, dance fourteen quadrilles in a night, and reject a proposal a day. Staunch to love in a cottage.

19 Years: A trifle more refined in shape and taste. Love in a cottage renounced for love in a house in town.

21 Years: Beginning to understand the meaning of the words. Younger brother. Anxious to postpone my sister’s debut.

22 Years: Softened in complexion, hardened in heart. Laces for a waist; and thinks it possible to marry for rank.

23 Years: Fidgetty respecting Almack’s. A graceful glide substituted for the buoyant step of a boisterous eighteen. Refuses a country squire, sighs for the drawing-room, and prattles about a diamond necklace.

24 Years: The age of supreme loveliness and surpassing vanity; beauty and elegance in full bloom. 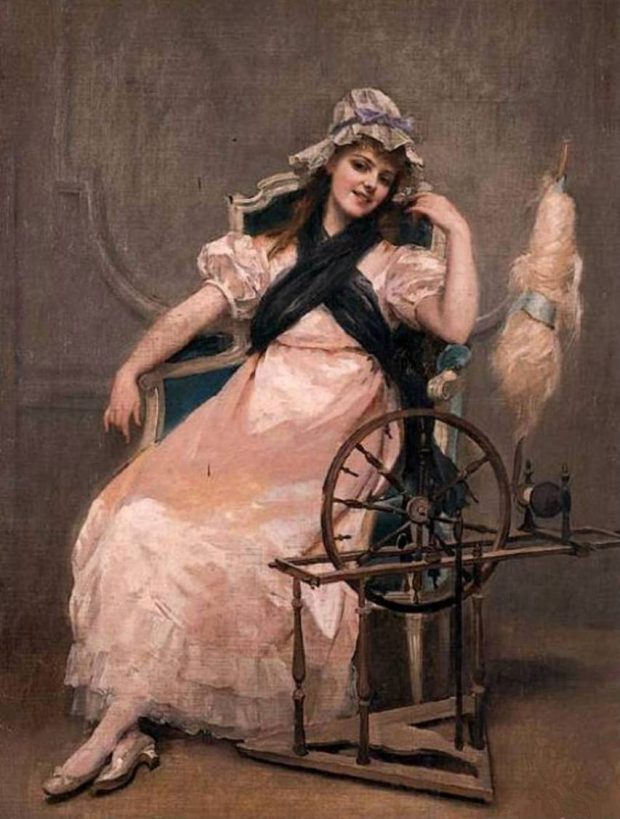 A Young Beauty at a Spinning Wheel by Madeleine Jeanne Lemaire, 1886.

25 Years: Surprised at being still single, and beginning to count the conquests of the season. Figures in tableaux and charades.

26 Years: Torments papa to spend the winter at Brighton, and give some dinner parties. Rides showy horses, in preference to her former airings with mamma.

28 Years: Nose a little red before breakfast. Thinks it possible to marry a widower, and pass eight months of the year on his estate. Considers tableaux and charades silly things.

29 Years: Hazards a second glass of wine at dinner, and takes an interest in the debates. Refuses to figure in a quadrille of beauty among the chits of the day. Brighton a frivolous gossiping place.

30 Years: Thinks it possible to pass ten months of the year in the country. Assumes a cap for morning visits, and reads tracts on the education of the poor.

31 Years: Tries Leamington and a five-barred gate. Failure. Waist increased, smiles diminished by a speck upon a front tooth.

32 Years: Serious. Quotes from Hannah More, and replaces the specked tooth with a Mallan. Thinks it possible to pass the year round in the country with a man one esteems.—Wonders how anybody can care for diamonds.

33 Years: Affects to patronise girls, and plays the chaperon.—Prefers men of a certain age. Reads Mrs. Somerville, and frequents the Ventilator.

34 Years: Flattered by the attention of a boy of eighteen. ‘Intellectual attainments defy all considerations of age.’ Accepts a stall at a fancy fair, and resumes pink ribbons. 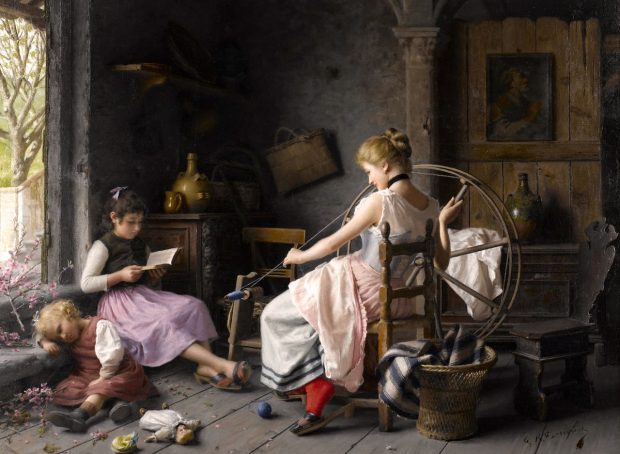 35 Years: A slight tint of rouge no harm by candlelight. Conversational, and a great acquisition in a country house.

36 Years: Calls herself nine-and-twenty, and would not be seen in a cap for the world. Takes to waltzing.

37 Years: Keeps down the drawing-room blinds, and has the chariot new lined with yellow. Resumes the cotillion.—Scraggy, fretful, and desperate.

38 Years: Makes parties to Beula Spa, and flirts by moonlight. Left in the lurch by an Ensign of the Guards.

39 Years: Spends the season with a cousin in Yorkshire, where second-rate London graces prove a bad substitute for the bloom of youth.

40 Years: Begins to busy herself about other people’s affairs.—Quotes the matrimonial squabbles of her married friends.—Nose decidedly red; lips decidedly blue.

41 Years: Thanks her stars that she is single. Threadpapers and housewife ordered to lie on the table, and a tabby cat under it.

42 Years: Indignant when told how well she wears. Attends church twice on a Sunday.

43 Years: Takes a constitutional walk before breakfast, and antibilious pills before dinner.

44 Years: Tries Harrowgate for the erysipelas; and indulges in a snooze in her own room after dinner. 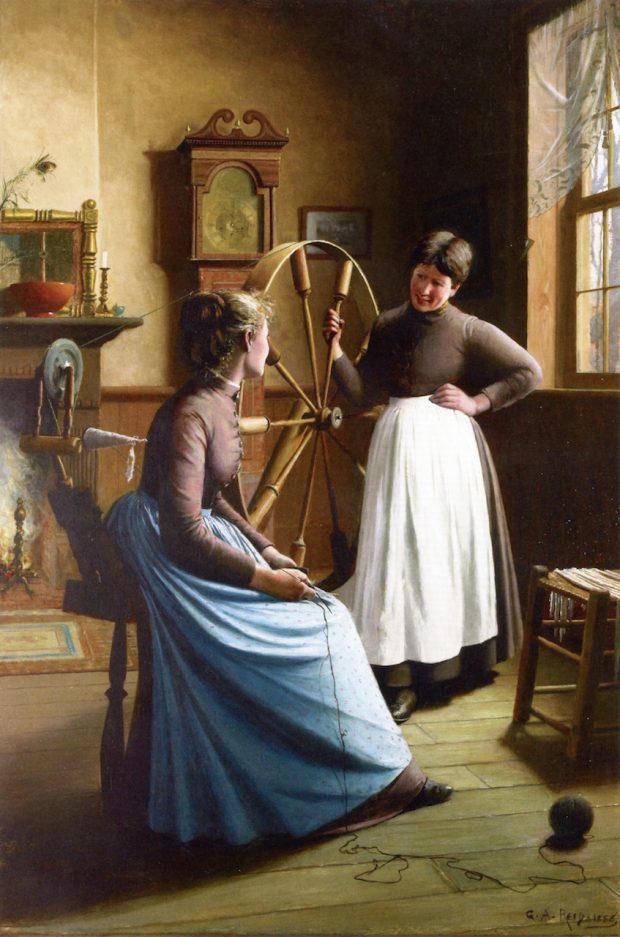 45 Years: Goes to service on Wednesdays and Fridays, or daily, if in a cathedral town. Takes sal volatile in her tea.

46 Years: Swears eternal friendship to a spinster friend, and keeps a cage of canary birds. Reads the Eclectic Review.

48 Years: Weeps cataracts at the discourses of dear Dr. Humgoose, and snoozes openly after an early dinner.

49 Years: Gratified to be told how well she wears. Makes her will. Leaves all to her beloved Arabella, except an annuity to the cat and canary birds.

50 Years: Startled by a proposal from dear Dr. Humgoose.—Consults Arabella, and determines to remain single.

51 Years: Alters her will on learning that her beloved Arabella has become Mrs. Humgoose.

52 Years: Survives the cats and canaries, and takes a companion.

53 Years: Triumphs at hearing how the Humgooses are cheated by their servants, and sets the companion to watch the giddy thing who lodges next door.

54 Years: Settles at Bath. Escapes the blue devils by becoming a blue.

55 Years: Assumes brevet rank. Becomes an esprit fort, and is thenceforward classed in our minds with beings of an epicine gender.

header photo: An Encounter at the Spinning Wheel by George Goodwin Kilburne, n.d.

Tags: Victorian men , Victorian women , Victorian era , spinsters , singlehood , unmarried , gentlemen's guide.
Support Feminist Media!
During these troubling political times, independent feminist media is more vital than ever. If our bold, uncensored reporting on women’s issues is important to you, please consider making a donation of $5, $25, $50, or whatever you can afford, to protect and sustain BUST.com.
Thanks so much—we can’t spell BUST without U.