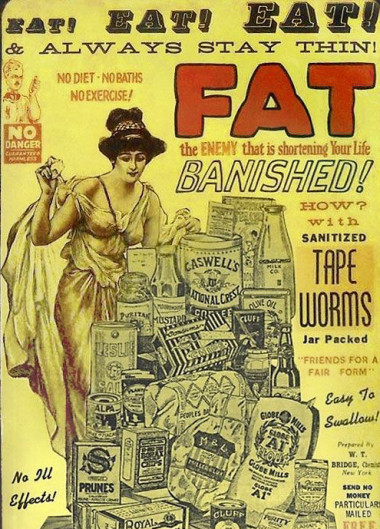 Fun fact: dieting does not work. And yet, every year, millions of us get on that diet bandwagon, looking for a quick fix. This isn’t a modern thing – it’s a tale as old as time. So let’s look back down the annals of history and try and find out why dieting is so prevalent, and what our ancestors used to do. 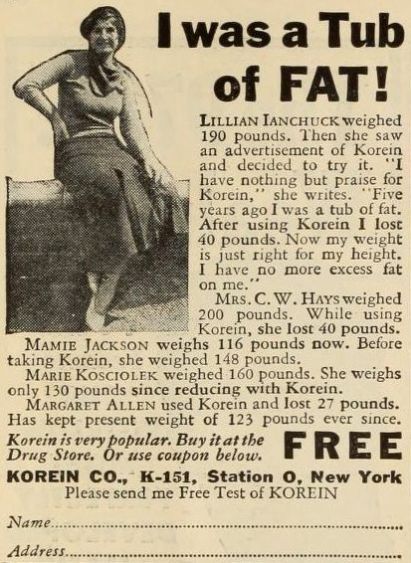 Example of a weight loss advert for Korein. In 1915, the pill was found to contain 60% petroleum and 40% sassafras oil (now banned for consumption in the U.S. due to its toxicity).

In Ancient Greece, it was understood that being overweight contributed to a lot of health issues. Greek physician, Hippocrates, actually wrote in his collection of medical work, the Hippocratic Corpus, that people carrying extra weight may experience conditions like (what we now know as) sleep apnea. He also outlined that bring overweight often meant an early death and, in general when it came to obesity, the ‘danger is great.’

To combat this, Hippocrates advised that Greeks taking on a ‘diaita’ (the Ancient Greek term that ‘diet’ stems from, BTW) not only make changes to the food they eat, but to their lifestyle as a whole: exercising, drinking less alcohol and more water, and eating lighter meals with a range of fruits and vegetables. So far, so good.

And right there is where Hippocrates’ health advice falls off a cliff.

There’s a lot to unpack there. First, let’s all agree that the no sex and whole plank thing are awful ideas. But, more importantly, all that advice is not only ill-advised but incredibly dangerous.

Like Hippocrates, a lot of early sources around dieting didn’t call for people to lose weight as a way to look good, but for health-related reasons. 1558’s The Art of Living Long was written by Venetian merchant, Luigi Cornaro, who had previously been so overweight his health was in jeopardy. Cornaro advocated for stripping back a diet to the necessary (though he still allowed fourteen ounces of wine a day).

London undertaker-turned-diet guru William Banting had a similar story. His obesity had meant he was in and out of hospital, so after losing weight, he published ‘A Letter on Corpulance’ in 1863, primarily as a way to flag up why losing weight was healthy and to tell people about the diet he’d used.

This letter blew up—seriously, it basically went viral—and soon Banting’s high-fat, high-protein, and low-carb diet was spreading like wildfire. In fact, it was so popular that “banting” became Victorian slang for dieting. 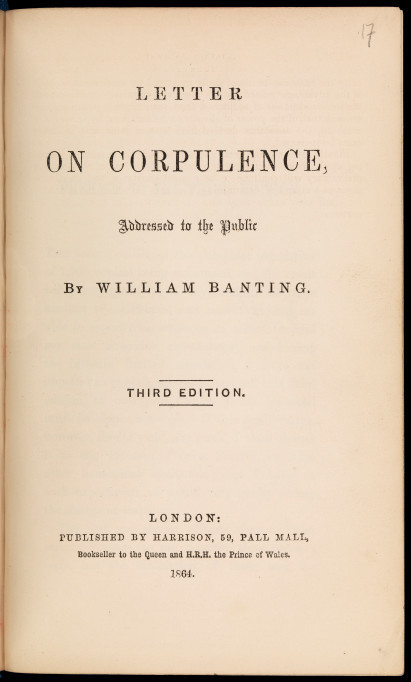 It’s also in the Victorian era that we start to see a real rise of diets being sold as a necessity to be attractive. Want to achieve that teeny tiny waist? Well girl, don’t just get a corset, get a tapeworm!

That’s right. A tapeworm. A flat, parasitic worm that lives in your gut and can grow up to 25 meters. Yeah, knowingly ingest a pill to get one of those, so you can lose weight.

Victorian beauty standards were harsh. As one beauty bible, The Ugly Girl Papers (what a name) put it:

“It is a woman’s business to be beautiful”

Women were expected to have a healthy appetite and yet also be appropriately thin with a waspish waist. That is a hard balancing act, made even worse when there were countless advertisements popping up telling women that one magic little pill could make them thin with zero side effects.

But of course there were side effects! It’s a parasitic worm, people! One of the biggest issues was getting the tapeworm out. You see, tapeworms like living in your stomach: it’s basically an all-you-can-eat buffet for them, so why would they want to leave? But if left in there, things get deadly pretty quickly.

So, to coax them out, people had to get a little creative. For example, one Dr. Meyers of Sheffield used to lure the tapeworm out by inserting a cylinder of food down a patient’s throat. This actually worked, but unfortunately sometimes his patients had a nasty habit of suffocating to death before the tapeworm could be fully removed.

It’s because of incidents like this that the Victorian tapeworm fad fell out of fashion. However, it still remains a thing in some forms, with many desperate dieters heading to dark corners of the internet to buy tapeworm pills. In fact, on one episode of Keeping Up With The Kardashians, Khloé Kardashian managed to turn a whole new generation of people onto the parasite pills, with just once sentence!

Seriously. She said, “I’d do anything to get a tapeworm.”

Now, in this era, arsenic was used in everything. It was a cleaning aid, an ingredient in soft furnishings, it was used to make bright green fashion accessories and also, occasionall,y used in a little light murder. So naturally, some bright businessperson thought to market it as a diet aid.

But here’s the thing. Not all these pills actually said they contained arsenic. Some just advertised themselves as ‘diet pills’ or, simply, ‘wonder remedies.’

The pills worked by speeding up the metabolism and actually only contained a small amount of arsenic that wasn’t enough to kill or do much damage. So what’s the big deal? Well, it’s a diet pill. And what do people often do with diet pills? They take more than the advised amount. Which meant a lot of people gave themselves accidental arsenic poisoning.

But those weren’t the only diet pills on the market. There were a lot of options! With names like Dr. Gordon’s Elegant Pills, Corpu-slim and even the very simply-named Slim. These also contained incredibly dangerous ingredients, including dinitrophenol, an industrial chemical that can cause blindness, as well as thyroid ‘activating’ chemicals, which often resulted in long-term heart issues.

It wasn’t all diet aids, though. Way before Beyonce’s cayenne pepper ‘master cleanse’ and Tracey Andersons’s ‘baby food diet,’ there was the Lord Byron diet: the original celebrity diet.

In 1816, famed poet Lord Byron lived on a thin slice of bread for breakfast, a few biscuits, soda water, and copious quantities of cigars to keep the hunger pains at bay. He exercised in layers upon layers of winter coats in an attempt to sweat more and told friends he would rather not exist than ever be ‘fat.’

It’s now almost unanimously agreed on that Byron was suffering from severe anorexia, but in 1816, nobody knew that. And so, he became considered a diet icon.Those desperate to get the pale and thin look sported by the huge pop culture icons that were Byron and his romantic poet set eagerly took up highly publicised Byron ‘diet.’

The popularity and extreme nature of the diet was so much that it became a big talking point of the era, with Dr. George Beard commenting that young women “live all their growing girlhood in semi-starvation… (for fear of)…incurring the horror of disciples of Lord Byron.”

Along with celeb diets, calorie-counting also isn’t new. Sure it’s now moved onto apps where we can just scan a bar-code and let our phones do the rest, but for decades dieting by counting intake has been a thing. In 1918, Lulu Hunt Peters published Diet and Health; With Key to the Calories, whichbecame the first true bestselling book based solely on a diet.

Those eager to get that flapper thin up and down figure learned from the book how to count everything they consumed, sustaining themselves on a low-calorie diet.

Around the same time as calorie-counting came the cigarette diet. For much of the early to mid-20th century, there weren’t advertising standards around selling cigarettes. Advertisers could say anything and—well—they sure did. Cigarettes were touted as everything from good for people with asthma, healthy, to (of course!) an amazing way to lose weight. And technically, cigarettes are an appetite suppressant. But they also cause major medical issues and will kill you. So, you know, swings and roundabouts.

In the 1960s, the “model diet” advocated smoking, drinking black coffee, and not much else. This lovely one somehow managed to linger in different forms throughout the ’70s, ’80s and ’90s. 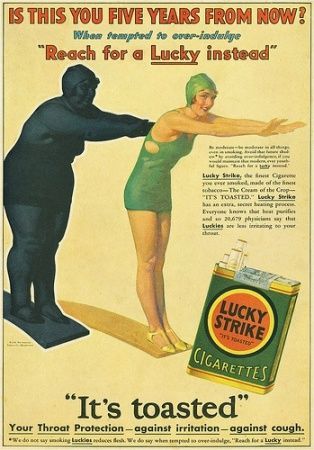 Hopefully, you’ve read this whole article thinking, God, what were people of the past doing? Which is good—and please, never try any of these diet techniques.

But also, think before trying any recent fad diet yourself: will this look ridiculous in 50 years? Because I can tell you right now that diet lollipops and detox teas? They’re definitely going to be fodder for some future snarky history writer.