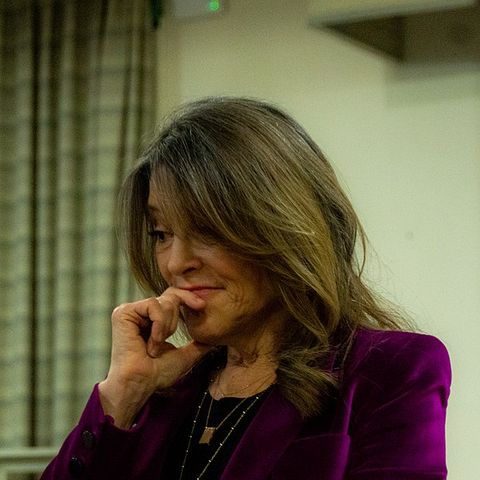 Marianne Williamson’s sudden internet fame shouldn’t seem uncommon in the age of Twitter, soundbites, and the apparent reality that anyone can become president (motion to 45). During the first Democratic primary debate, Williamson, the self-help guru, public speaker, and author, made notable comments on reparations and environmental racism which have attracted interest from all corners of the internet, so much that she was the most searched candidate following the debate and the talk of punditry across the board. Yet, the attention for the formerly written-off candidate has been given much-needed context from the disabled and chronically ill communities, especially on Twitter.  Now, Williamson is facing scrutiny from the disabled community and allies for the common theme in her positivity-based gospel: that your chronic illness or health problem is, in part, your fault.

Marianne shining with her ableism- "BUT WHY ARE PEOPLE GETTING SICK?" "BUT WHY DO WE HAVE A SICK-CARE SYSTEM?" BECAUSE SOMETIMES PEOPLE JUST GET SICK FOR NO REASON MARIANNE. #CripTheVote #DemDebates

While Williamson has walked some of her comments back, particularly surrounding depression and anti-vax rhetoric, her ideas are still dangerous ones, especially as they relate to chronic and mental illness. Her teachings are based on the idea that love and constant positivity are needed in order to cast out sicknesses, including cancer and AIDS. In her 1996 book, A Return to Love, Williamson said of illness, “Sickness is an illusion and does not actually exist. It is part of our worldly dream, our self-created nightmare.” This poses absurd implications for the realities of many Americans that struggle to afford healthcare or simply can’t get better.

And as if these teachings weren’t already crossing a line, activists and writers have countered the pro-Williamson memes and Tweets with reminders of  other times Williamson has set off red flags.

Marianne Williamson used to roll with Louise Hay, who built a publishing empire claiming she cured her own vagina cancer with positive thinking. Like Williamson, at times she heavily implied that one causes one’s own illness through negative thinking. They both made $$$.

Most recently, Williamson made flirty comments to the anti-vax camps by calling mandatory vaccinations “Orwellian.” And just a year ago, in a 2018 interview with Russell Brand, she called diagnosed depression a ‘scam.’

For years, these teachings have awarded her with money from speaking events and book sales as well as the affection of big-name celebrities (Kim Kardashian, Oprah, and Jane Lynch, to name a few). She is even a former roommate of Laura Dern’s, which seems like enough of an accomplishment even with her failed congressional race and low polling numbers of the current primary. And with her debate performance night two nights ago, Williamson has received widespread recognition from simple curiosity to outright praise: CNN said, “She's already made the race a hell of a lot more interesting,” a comment which reflects a lot of Williamson’s newfound and seemingly light-hearted fandom. Regardless of whether this spotlight is ironic or not, the internet’s love of Williamson is cause for major concern — and the disabled and chronically ill communities aren’t having it.

If you want to know why Marianne Williamson isn't fun and funny, listen to the disabled community in #CripTheVote on Twitter. Or listen to the silence left in the wake of the people that died of AIDS because of her advice and assistance.

Pushing past the cozy headlines of major news publications surrounding Williamson, advocates for projects like #CripTheVote and other disability initiatives have been resetting the conversation to draw attention to the consequences of this political bandwagon. Not only should her newest admirers be aware of her troubling history, but they need to seriously consider the pitfalls of her brand of spirituality when it comes to discussing health. . In a Bustle article, disability rights activist Liz Moore pointed out how ignorance to Williamson’s past falls into a familiar pattern of America’s ableist undertones. Moore wrote, “Disabled people... face unscientific thinking, unsolicited advice, fear of ‘Big Pharma,’ and toxic positivity all the time.” Moore’s response to this praise highlights how the memes surrounding the guru’s spiritual gospel aren’t as fun for the people who face the consequences.

The Moderators only cut her off because they fear her. #DemDebate pic.twitter.com/qdbP6KFBDg

It’s easy to write off the criticisms about Williamson, especially when she’s fighting for reparations or simply doesn’t seem important enough to care about. But with what Williamson embodies to the disabled and chronically ill community, giving her a platform isn’t harmless, especially at the current stakes. Comedian and BUST writer Sara Benincasa perfectly summarized the ramifications of her newfound support: “In a post-Trump era, hucksters like her have a demonstrably real shot at public office. Please choose somebody with more common sense.”

That is to say, there’s an important argument against supporting Williamson. The least everyone can do is listen.