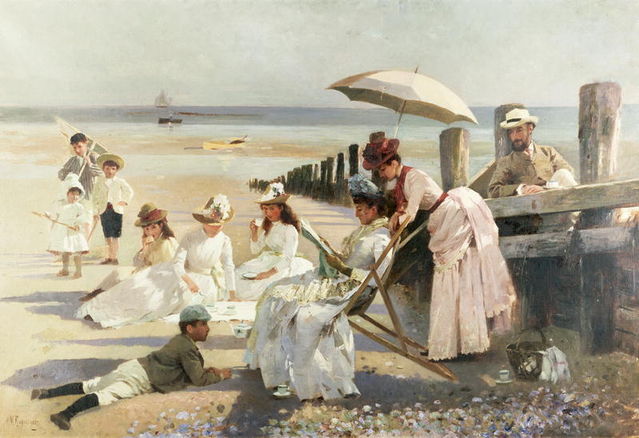 “The close of the London and Parisian Season has now arrived, and the Fashionable World has sought the invigorating breezes of the Seaside…”
The Ladies’ Monthly Magazine, 1869.

During the 19th century, there was no such thing as a holiday from fashion. Seaside resorts in England—whether in Brighton, Bournemouth, or Burnham-on-Sea—were as much a place to flaunt one’s style as London itself during the season. An 1869 issue of the Ladies’ Monthly Magazine even goes so far as to declare:

“…splendid as they have been in the season just ended, dresses to be worn at the Seaside, and at the mansions of our Aristocracy, often surpass those that have been worn in London or Paris, during the height of the Season.” 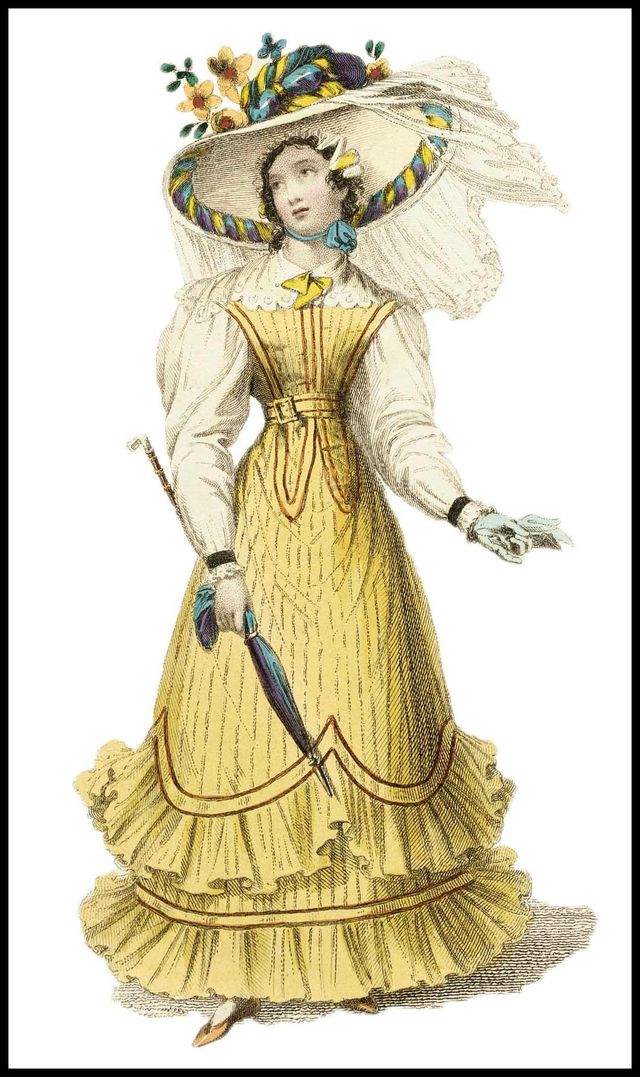 In the Regency era and into the 1820s and 1830s, seaside dresses were often quite similar to walking dresses. They were made in light fabrics, such as cambric or muslin, and worn with pelisses made of light-colored cambric, jacconet muslin, or silk. Straw hats, leghorn bonnets, and veils that covered part or the whole of the face were also quite popular at the seaside, as were parasols for shielding a lady’s complexion from the summer sun.

Much as in the preceding decades, the silhouette of seaside dresses in the early Victorian era stayed relatively close to that of walking dresses. It was not until the 1860s that a definitive “seaside costume” began to emerge. According to fashion historian C. Willett Cunnington, a seaside costume was differentiated from other garments by:

“…its material (piqué) and comparative ease; e.g., a deep jacket and plain piqué skirt, and sash with ribbon ends, worn with a puffed chemisette and high piqué collar, and cravat (of silk, one inch wide, edged with black lace); while the Garibaldi jacket can be worn over a muslin dress on such occasions. The zouave jacket, worn over a chemisette, with a light skirt, is also appropriate.”

In the below image, you can see a cotton seaside dress from the 1860s. Note that though the shape of the skirt and jacket remain in line with that of the popular, large-skirted fashions of the 1850s and 1860s, the cut is looser and the gown is fairly plain. 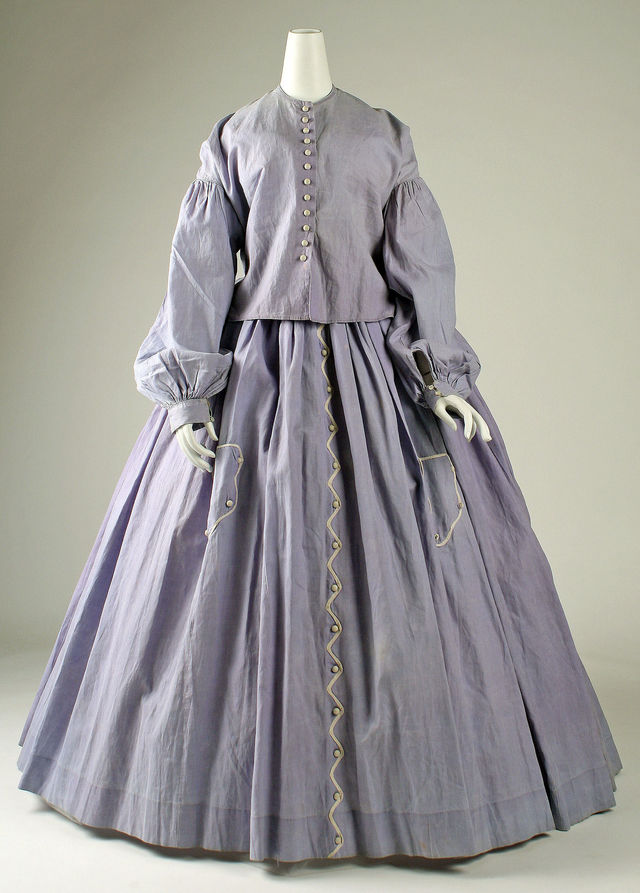 The 1862 issue of Godey’s Lady’s Book reports that “quilting dresses” were very much in style for the seaside that season. These dresses were either plain white, striped, or “sprinkled over with field flowers.” Cotton piqués were also extremely fashionable resort wear, especially in buff, mauve, white, and “tea-colored.” These dresses were often comprised of a skirt and a jacket and were trimmed with red, white, or black braiding. A lovely example of this can be seen in the seaside dress worn by the seated lady at far left in the Godey’s fashion plate below. It is described as follows:

“Suitable for the sea-side. White piqué dress, bound and trimmed with black braid and buttons. The skirt is plain, and the body resembles a riding jacket, having revers and pockets, and the sleeves being finished with gauntlet cuffs. Headdress of black velvet ribbon.” 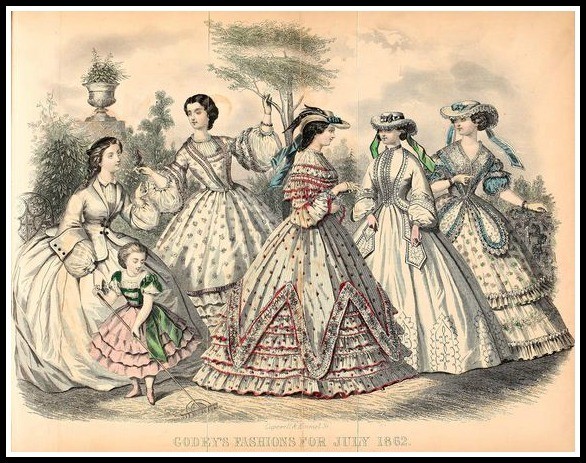 Here is another example of the popular style of 1860s white cotton seaside dress trimmed or embroidered with a darker color. This seaside ensemble is comprised of a skirt, bodice, and jacket made of cotton. The flat-crowned straw hat in this image is from the 1870s and is trimmed with seashells. 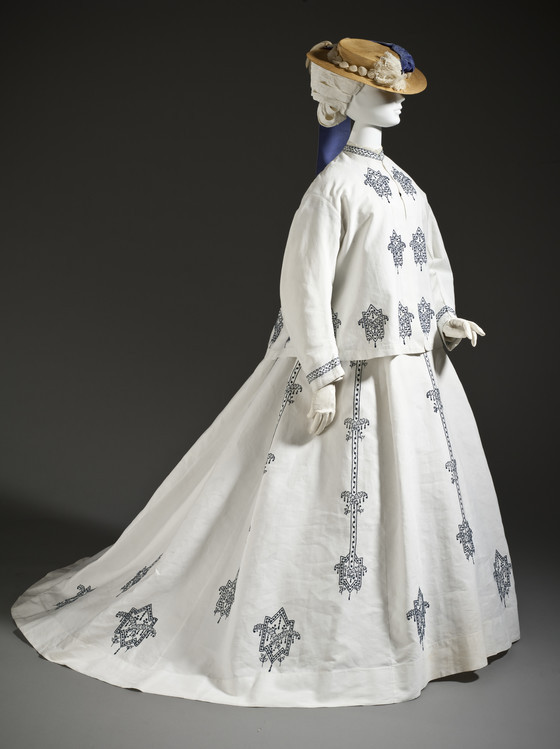 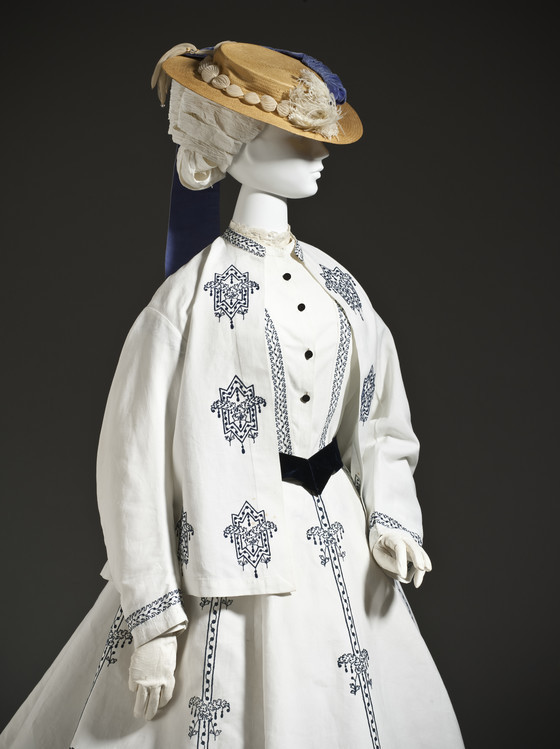 By the late 1860s, the silhouette of ladies’ gowns was beginning to change. Fabric that had once been draped over enormous wire crinolines was now being drawn to the back and draped over a bustle. Seaside costumes were not immune to this metamorphosis. Still, seaside gowns managed to remain distinguishable from morning gowns, walking gowns, and other dresses mainly by virtue of the fabric used—cotton piqués, cashmere, or wool—and the simplicity of their trimmings.

Below is a late 1860s seaside ensemble made of wool. Note that despite the gradual change in shape from the large-skirted seaside gowns of the early 1860s, this gown still appears relatively loose-fitting. 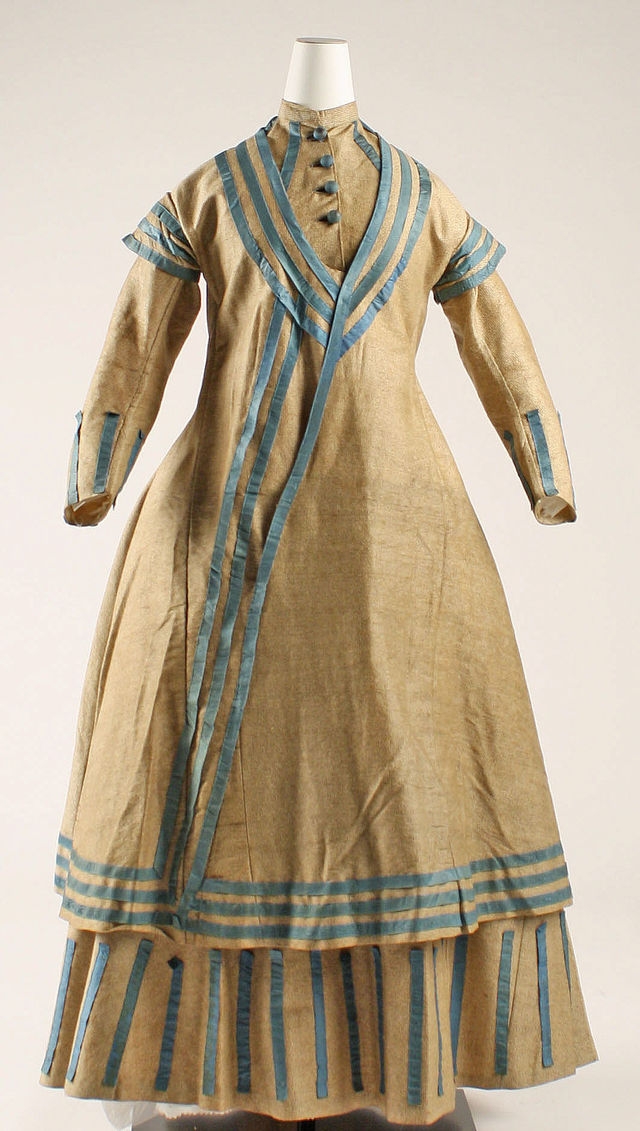 As the 1860s came to a close, some seaside costumes depicted in fashion magazines were brighter and a bit more elaborate. This is well illustrated in the 1869 fashion plate at below right which shows a seaside costume made of white and blue cashmere with a blue cashmere underskirt. The Ladies Monthly Magazine describes it as follows: 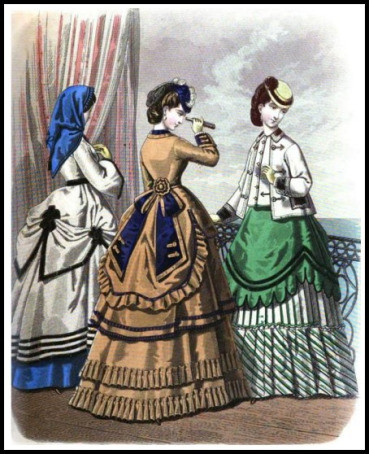 Though fashion magazines depicted seaside costumes in bright, contrast colors, seaside dresses of white or tea-colored cotton with black embroidery remained very popular throughout the decade and well into the next. Below is a lovely example from 1869. This two-piece seaside ensemble from The Bartos Collection (who have kindly given me permission to use the following images) is made of corded cotton that has been embroidered in black and trimmed in silk fringe. 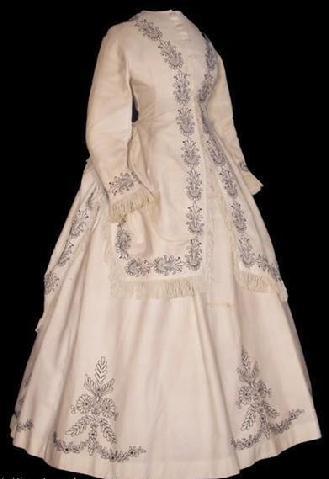 Seaside costumes of the 1870s remained fairly similar in shape to the walking dresses worn during the season. In prints, fabrics, and trimmings, however, seaside fashion was sometimes whimsical. For example, the below gown, from an 1870 issue of the Milliner and Dressmaker and Warehouseman’s Gazette, depicts a seaside dress made of silk covered with “sprays of poppies and ears of corn.” The lady is also wearing a hat trimmed with “wheat-ears.” The full description reads:

“Dress of white foulard silk, covered with sprays of poppies and ears of corn. The train-skirt has a gathered flounce, headed by a high marquise ruche, edged by maize-coloured silk. A tunic bodice, with revers in front of the bodice and skirt, bordered by a pleating of maize silk. A double row of silk forms the sash. Sleeves with revers, trimmed with a pleating of maize silk. Rice-straw hat raised at the back, trimmed with a bow of red ribbon, a tuft of feathers and wheat-ears.” 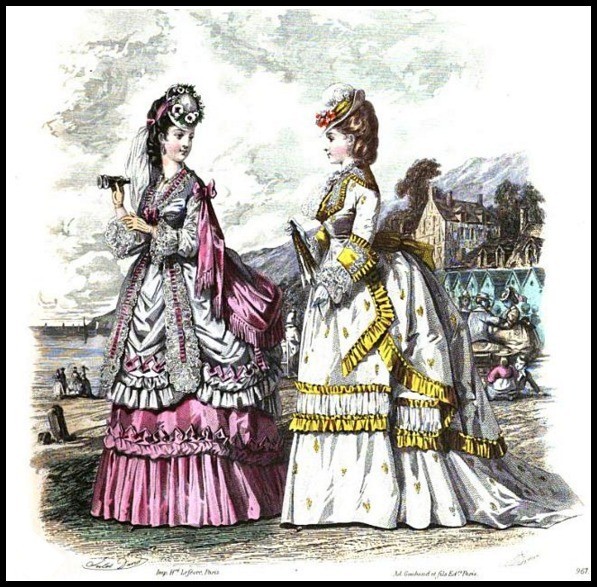 The Miller and Dressmaker and Warehouseman’s Gazette also features the below gown of white spotted foulard trimmed in cerise. This seaside costume is not as whimsical as the costume above, but with it’s Louis XV waistcoat and jaunty straw hat adorned with ears of corn, it is a striking ensemble which appears worlds different than the plain cotton piqué one usually sees in seaside costumes of the 1860s and early 1870s. The description reads:

“Sea-side Costume of white foulard, spotted with black. The skirt trimmed at the edge with a deep flounce, with a double heading composed of two cordings of cerise foulard, separated by three rows of black velvet. Bodice without sleeves, open in front en coeur, and showing a Louis XV waistooat. This bodice has long basques forming a tight-fitting casaque; the trimming is of black velvet with a heading of cerise foulard, and forms a puff at the back. Chemisette with collar of cambric, with Valenciennes jabot, with sleeves to correspond. Hat of English straw; the brim raised on one side with, crepe de chine scarf, and spray of wild flowers, and ears of corn arranged as an aigrette.” 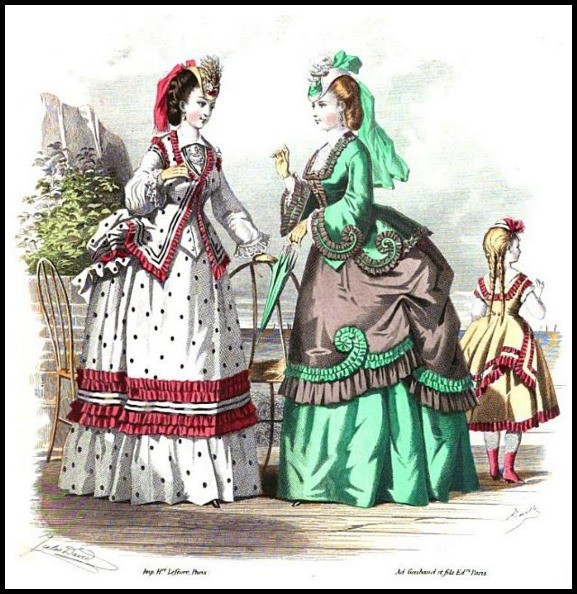 As mentioned above, not all 1870s seaside dresses were brightly colored or made of whimsically patterned silk. In fact, many seaside costumes continued to be made in some version of light colored cotton or wool that was trimmed, embroidered, or printed in black. Below is an 1870 seaside ensemble made of printed cotton. It consists of an overdress and a petticoat. 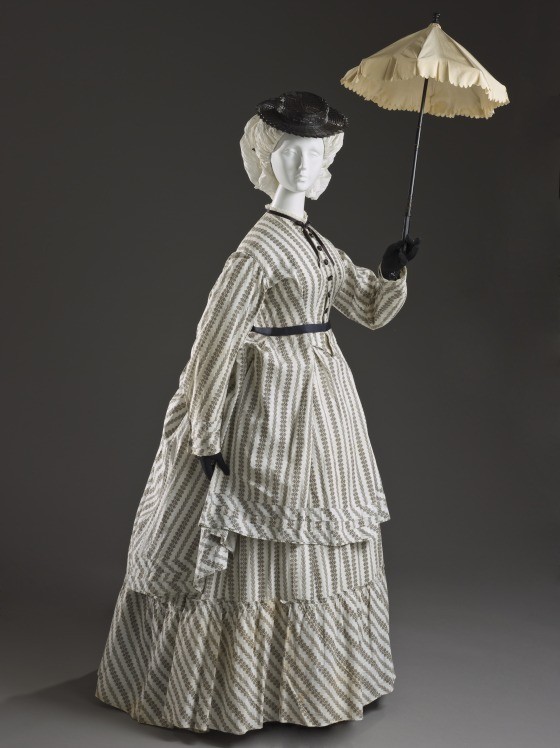 The skirts of seaside dresses were usually shorter—with a hemline at or above the ankle—for ease of movement. The below image of an 1872 seaside dress shows the length of the hemline in comparison to the mannequin’s boots quite clearly. Notice the style and color of this particular seaside ensemble. According to the Victoria and Albert Museum, the style of this gown was inspired by the colors and stripes in a British sailor’s uniform. Sailor inspired seaside dresses would become very popular toward the end of the century.

In 1877, some seaside dresses were beginning to be made with a fabric called “seaside barège.” According to a Godey’s Lady’s Book, this soft, white wool fabric resembled flannel, but was of less weight and “cool as muslin.” As Godey’s states:

"[This fabric promises] to be very extensively used for country toilets, especially at the seaside, where the moisture takes the starch out of cottons and linen." 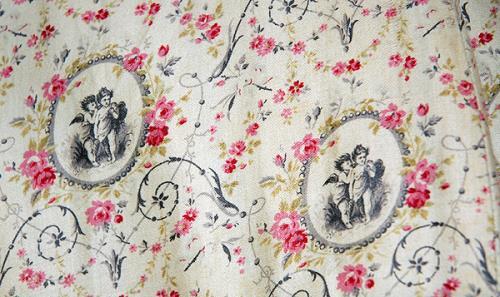 The availability of more “beach friendly” fabrics did not affect the popularity of cotton, which continued to be used for seaside costumes throughout the 19th century. For example, the 1878-1880 seaside dress below is made of cotton sateen printed with pink roses and cupids. The narrow skirt and bodice of this dress is very much in keeping with the fashionable silhouette of the 1880s.

By the end of the 1880s, seaside costumes were even tighter and narrower than ever. An 1888 edition of the Woman’s World Magazine describes them as “sheath-like seaside costumes that cling to the figure” like an “outer skin.” These tight-fitting seaside dresses gave way to the popular middy blouses (blouses with a sailor collar) and flared skirts of the 1890s. Below is an 1895 cotton piqué seaside dress comprised of a middy blouse and skirt. 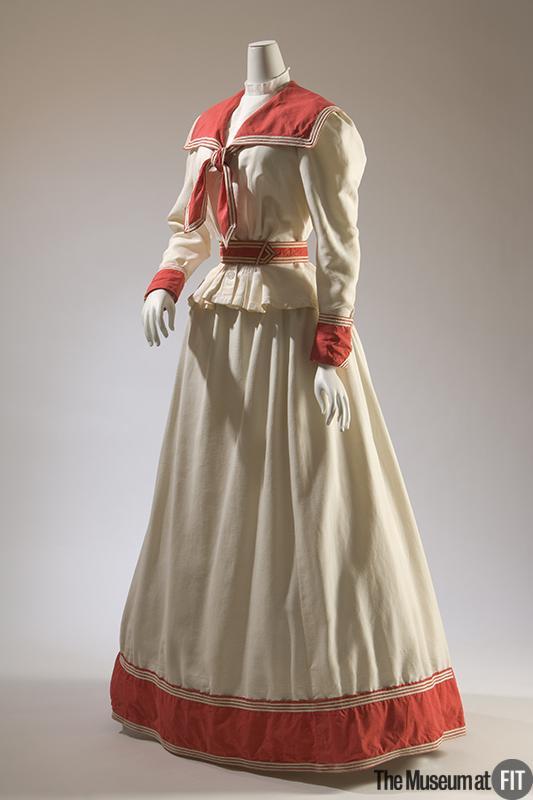 The close of the Victorian era saw record numbers of people spending their holidays at the beach. Not only the fashionable upper classes, but the working classes, too. In fact, according to a 1900 issue of the Speaker:

“We believe it would be found on a careful estimate that there are more people in the seaside holiday places of southern England than in all the other seaside places of the world put together.”

With so many people drawn to the seaside each year, it is no wonder that ladies in the Regency and Victorian eras took such an interest in seaside fashions. I hope the above information and images have given you some little idea of what these ladies might choose to wear on their seaside holidays.

This article originally appeared on MiMiMatthews.comand is reprinted here with permission.