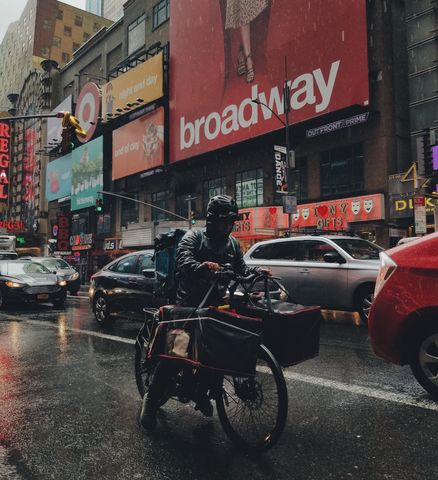 The most popular food delivery app in the nation used an exploitative tipping model for years until this week’s public outcry finally produced a policy change. CEO Tony Xu tweeted last night, "Going forward, we’re changing our model - the new model will ensure that Dashers’ earnings will increase by the exact amount a customer tips on every order."

This annoucement comes after a New York Times story about the food app delivery industry sparked widespread outrage. In the Times piece, Metro section reporter Andy Newman described his six days biking around New York as a “Dasher.” He broke it down like this:

DoorDash offers a guaranteed minimum for each job. For my first order, the guarantee was $6.85 and the customer, a woman in Boerum Hill who answered the door in a colorful bathrobe, tipped $3 via the app. But I still received only $6.85.

Here’s how it works: If the woman in the bathrobe had tipped zero, DoorDash would have paid me the whole $6.85. Because she tipped $3, DoorDash kicked in only $3.85. She was saving DoorDash $3, not tipping me.

The company was using customers’ money to subsidize payments to their delivery workers. And it wasn’t the only one.

A cluster of food delivery apps, including DoorDash, Amazon Flex, and Instacart, have been manipulating on-app tip models like this one for years. In February, the on-demand grocery app Instacart came under fire when it was exposed for maintaining an identical policy. The company responded to outrage with an apology and an increase in baseline pay (from $3 to $7-$10).

During that wave of criticism, DoorDash was urged to drop their tip-pocketing policy alongside Instacart. But chief exec Tony Xu resisted. He claims: “This is a model that is built with Dashers in mind. The Pay model is meant to make sure every order is worth fulfilling.” Almost half a year later, DoorDash is finally backing away from that position.

Now it looks like customers won’t need to tip exclusively in cash to be certain delivery workers keep the money. But the problem is: policy adjustments probably aren’t enough to ensure fair compensation. Instacart employees told Vox that their pay didn’t improve even after the company scrapped the absurd tipping policy. For some, it actually deteriorated. One Instacart deliverer, whose pay fell by 30%, said, “Instacart says our payments are based on some sort of algorithm, but they aren’t transparent with us and none of us know how the payments work.”

Some DoorDash deliverers are concerned they’ll face similar outcomes. A delivery worker posted in a Reddit thread for “Dashers”: “I’m worried that the orders will guarantee less now, but we get all the tips. Meaning a previously guaranteed 10-dollar order might now only guarantee 5 bucks, and you get a 2-dollar tip, meaning you got 7 bucks for that order.”

In part, this stability traces back to the way delivery workers are classified. If you’re employed directly by a restaurant, you’re legally entitled to minimum wage, at least. But if you work for a third-party company like Postmates or GrubHub, you’re usually categorized as an “independent contractor”—and you’re no longer eligible for the same legal protections.

While some companies claim their workers make more than minimum wage regardless, their statistics are skewed. Newman notes, “Postmates says its couriers in New York City average $18.50 an hour. But it counts only the time when a courier is out on an order as part of that hour. The long stretches I spent staring at my silent phone like a jilted boyfriend, waiting for it to ping? Not part of my workday, according to Postmates.”

And in the world of gig-economy food delivery, the chaos extends beyond wages. Injuries on the job are common: bikers navigate hectic traffic and clueless pedestrians all while keeping tabs on their phone screens, which give riders mere seconds to accept new deliveries before the clock runs out. Most apps also roll out tempting but elusive bonuses for completing a surge of deliveries within a cramped time limit, incentivizing riders to take on more and more orders without knowing where they’ll have to deliver each one before accepting it, how much it’ll pay, or how long it’ll take.

The system is as deeply flawed as it is ingrained in the on-demand digital era. To address it, for starters, we need companies like DoorDash to do more than just the bare minimum.