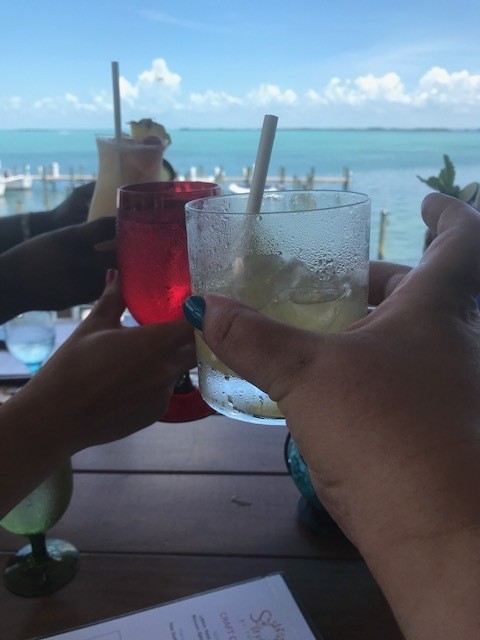 Thanks to films like Girls Trip and reality shows like Real Housewives, I’ve long fantasized about going on a grand, ladies-only adventure to an exciting destination. So when I was recently invited to join a group of cool female journalists on an excursion to the Playa Largo Resort and Spa in gorgeous Key Largo, FL, I jumped at the chance to travel girl-gang style. Much like Baby in Dirty Dancing, I had the time of my life. And along the way, I picked up some ace planning tips to use in the future.

1. Pick a centralized location with easy access to planned activities. 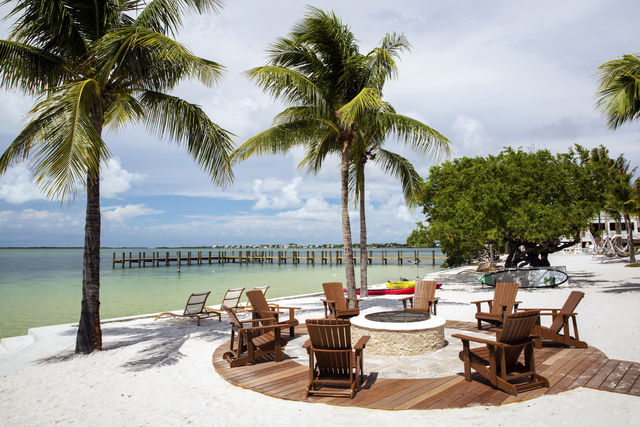 No matter how thoughtfully an itinerary is planned, it is likely members of your entourage will need to peel off from time-to-time. For example, two members of our group were working on a video project that took them off on their own one morning, another gal opted out of certain activities because she’s pregnant, and I needed to take an afternoon off because I got queasy while learning to snorkel. Luckily, all the activities and adventures planned for us were easily accessible from the resort, which made it no problem to duck out, and then rejoin the party. Also, being able to quickly shed a wet swimsuit, or change from a day outfit to a night ensemble without taking up tons of time, was a definite plus.

2. When dining together, try family-style. 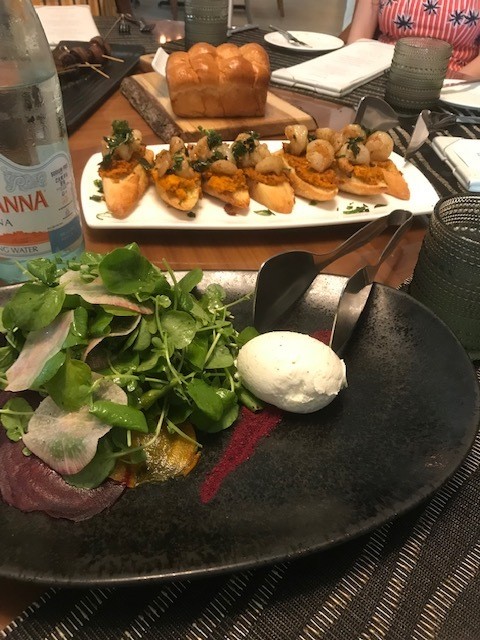 These days, dietary preferences and restrictions are a bigger consideration than ever before. And while choosing a restaurant that makes everyone happy isn’t impossible, it is challenging. In our small group, there was the aforementioned mother-to-be, two vegetarians, and a seafood allergy. In the mornings, we dined solo, either in our rooms or at the resort’s generous breakfast buffet. This worked out great, both culinarily and in terms of our varied wake-up times. But when it came time to dine together and bond as a group, the most broadly satisfying and memorable meals were those served family style. On our first night, at Playa Largo’s seasonal farm-to-table restaurant La Marea, we mixed a la carte entrees with multiple apps and veggie-centric sides served family style. This way, vegetarians and carnivores alike could take full advantage of the island’s bountiful fresh produce and try lots of things while easily avoiding whatever they needed to avoid.

This theme continued the next night at my favorite meal of the trip (and, honestly, one of my favorite meals ever) served at a long table right in the sand beside the Florida Bay at Sol by the Sea. There, Chef Carl Stoeher created for our group an entirely family-style banquet that included elaborate maki rolls; charred shishito peppers; dramatically presented whole roasted snapper; slow roasted mojo pork shoulder; grilled island vegetables including perfectly crisp asparagus and deeply flavorful bell peppers; aromatic coconut rice; perfectly seasoned black beans; and by far the best ceviche I’ve ever tasted—grouper, shrimp, and octopus bathed in a bewitching blend of Peruvian aji amarillo peppers, lime, and cilantro. By the time the giant brownies topped with salted caramel ice cream came around we were practically begging for mercy. 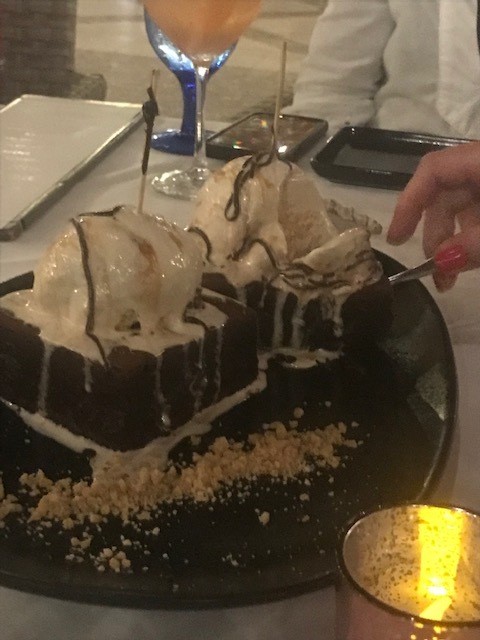 Of course, not every place is going to have someone as skilled as Chef Stoeher overseeing the gustatory needs of their guests. But it’s definitely worth asking if family-style dining for your group is possible, especially if it’s a special occasion. The price of this kind of setup may be comparable to dining a la carte, and it’s likely you’ll get better food and more variety for your dining dollar since the chef will know the needs of your group ahead of time and will have license to show off and be creative.

3. Plan some activities that emphasize relaxation. 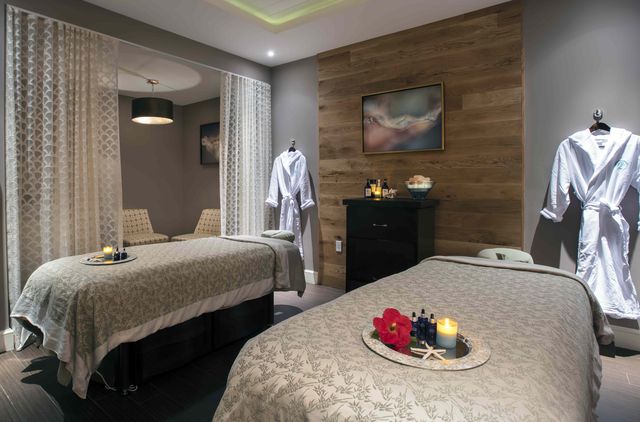 There is no such thing as a one-size-fits-all group activity. And of course when you visit someplace new you want to see the sights. But I couldn’t help but notice that the two planned experiences that emphasized pampering and relaxation were the ones nobody wanted to miss. The first was a blissful day at Playa Largo’s Ocean Spa where our group was given a choice between a Soothing Wave Massage, a Key Lar-Glow Facial, or a Paradise Polish Full Body Exfoliation. Massages are totally my jam, so I made a beeline for the Soothing Wave—a 50-minute Swedish rubdown expertly executed by a lovely young woman named Cinnamon. And just as enjoyable as the massage was the time I spent with the other ladies sipping coconut water in fluffy robes while lounging on soft furniture. Truly, we were living our best lives. 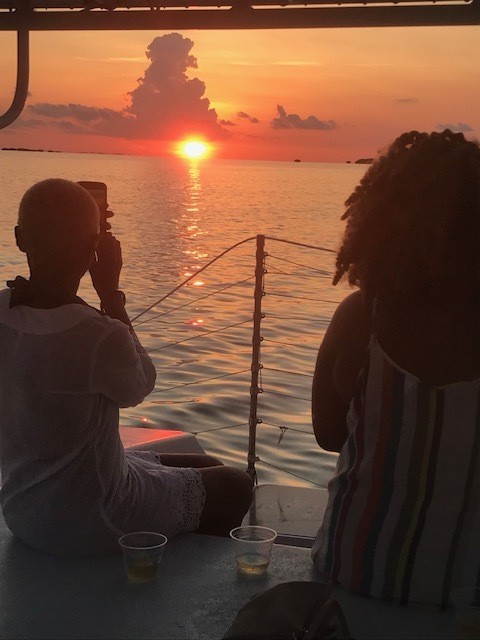 Our other chill activity was just as relaxing but way more dynamic. At 6 p.m. we gathered on the resort’s pier on Florida Bay before boarding the Carolina Moon, a swank catamaran operated by a kickass duo of seafaring women—Captain Lolly and Captain Ginny of Caribbean Watersports—for a sunset cruise. Our group grooved to yacht rock, sipped champagne, munched on fruit and cheese, and took a million selfies on deck as the sun melted vibrantly below the horizon. (I also may have declared a few times to nobody in particular, “I’m on a boat!”)

4. Choose adventures and new experiences that can be enjoyed by folks of varying skill and fitness levels. 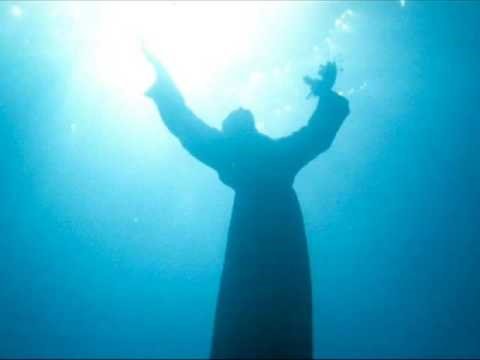 While relaxation is always nice, when traveling, it’s also cool to experience new things that really get the blood pumping. But in groups, physical abilities vary, so it’s equally important to seek out excursions that don’t leave folks out. With water sports—the main form of recreation in the Florida Keys—this is a no-brainer because cruising around on the cool boats that facilitate the sports is half the fun.

Because of a back injury, I opted out of parasailing—aka flying in the air behind a speedboat with help from a giant parachute. But you better believe I had fun filming my new friends as they lifted off into the air. And chilling on deck with our dreamy guides from Caribbean Watersports, Brennan and Jordan (a recent model for Vineyard Vines—ooh lala), also had its perks. 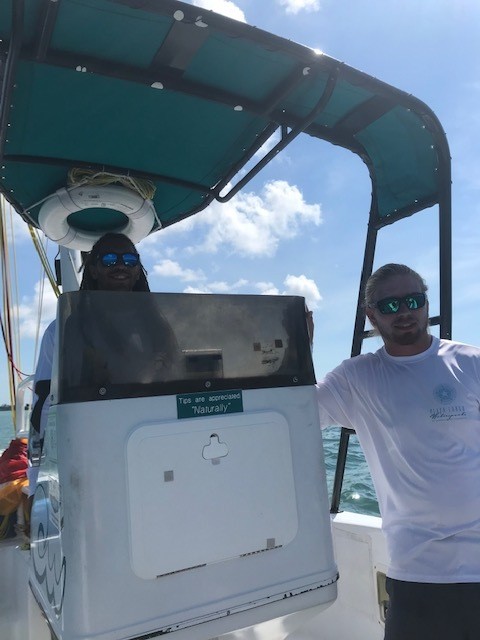 Later in the trip, on a more elaborate snorkeling tour of John Pennekamp Coral Reef State Park (this was the day I got a little pukey), we all participated in accordance with our abilities. The bravest among us swam all the way out to “Christ of the Abyss,” a statue of Jesus submerged underwater in a lush garden of coral and marine life. As a newbie, I stuck close to the boat and practiced floating face down and breathing through my snorkel tube while investigating easier to reach areas. And our group’s one non-swimmer caught some rays on deck, dangled her legs in the crystal blue Atlantic Ocean, and took plenty of sweet pix.

5. Absence makes the heart grow fonder, so pad the itinerary with alone time.

Every day of our trip, there was some time built in to the schedule for alone time to nap, take a solo swim, or in my case, check in with the Law & Order SVU marathon airing on USA. Even if you’re traveling with women you love, socializing can be draining. These little breaks re-energized us for the fun times to come. And for the two women who left small children at home to attend these few days away, I sensed that this alone time was just as luxurious as our spa treatments. 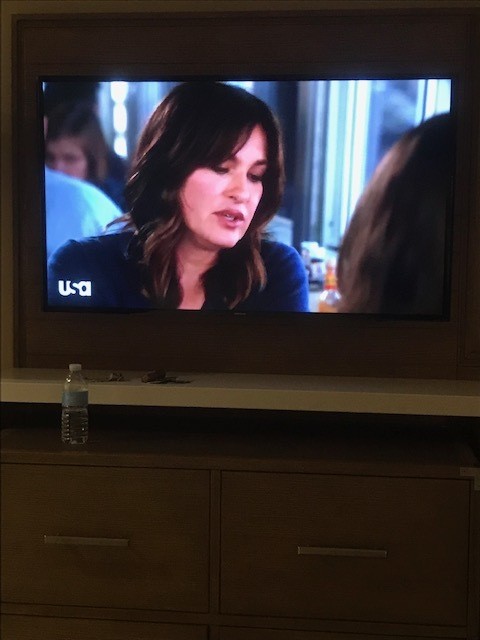 I had no idea who I would be traveling with when I signed on for this adventure, and I was so happy to discover that all of my fellow journalists were cool people I would happily hang out with again. Which brings me to the main bit of wisdom I took away from this experience: Invite awesome women to join you on your girls’ trip and the rest will fall into place. Bon voyage! 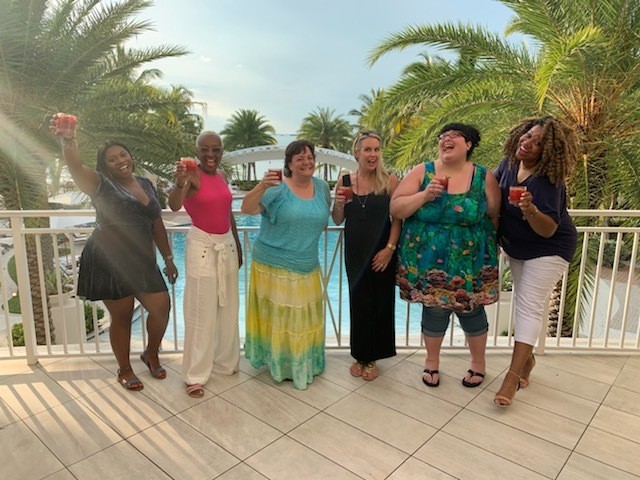