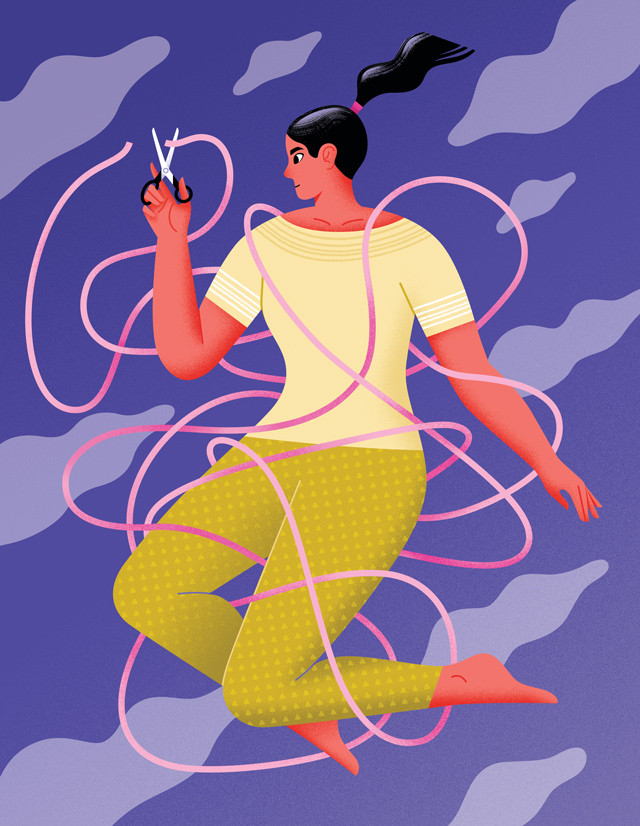 TWO DAYS BEFORE the surgery, I realized I needed to tell more people that I would be out of commission for a little while. I’d been fielding the usual requests—“Lunch soon?” “Drinks next week?”—over text individually, but I was growing a little weary. As I stood in line at the pharmacy to pick up a prescription for painkillers, I just wanted to be able to focus on this big thing I was doing. And that meant telling people to back off for a while.

What’s on your mind? asked the text box on Facebook. It’s a loaded question. The language would be tricky. It would be purposefully vague, but it would also need to reassure people that I was fine. Because I was fine. I was better than fine. I was finally doing something that I had been trying to do for more than a decade.

So I posted a status update, letting everyone know that I would need a bit of space in the next week or so (I wasn’t sure how long it would take to get back on my feet). People were supportive. They were pulling for me. And, I’m sure, they were also curious—what was this small, elective surgery? A boob job? A cyst removal?

Though I am pretty comfortable with sharing entirely too much of my personal life and experiences, I remained noncommittal about this one. Because if I’ve learned anything, it’s that people have a lot of personal, intense, and often judgemental feelings about a young, childfree woman who is choosing to be sterilized at age 31.

DECIDING WHAT I WANTED

As a first-year education student, working toward becoming a secondary English teacher, I read a lot of books about childhood development, psychology, and educational theories. As I underlined and circled, I imagined my classroom, my students. I imagined what we’d read and discuss, and thought about how fun it would be to listen to their zany teenage ideas.

“You must love kids!” a friend’s mom said when I told her what I was studying. We were at a group dinner in a strip mall restaurant with other women from my dorm.

“Ah, I guess?” I answered. I didn’t love kids any more than I loved any other kinds of people. I just really loved my education and had been shaped by so many important adults when I was young that I felt like it would be a good match for me.

“I love kids!” said one of the other girls. “I can’t wait to have babies.” Many of the other young women nodded in agreement as the subject turned to their future families. Oh no, I thought. I do not identify with this at all.

The next year, I would leave the education track when a professor told me rather firmly that I should consider becoming a writer—a thought which had quite honestly never crossed my mind because I didn’t think “writer” was a real job. After switching majors, I found that the subject of children rarely came up anymore. I never had to talk to people about kids; I was 20 years old, no one was expecting me to have kids at that moment, and in general, children factored into my life very little. There were no children in my future-planning—and not just in the way that young people fail to understand the gravity of family leave or the cost of pediatric health care. They just weren’t part of my outlook.

And then, one day, my then-boyfriend saw an unusual street sign and joked that it would make a great name for “one of our kids.”

“I don’t think I want kids,” I said casually, looking out the window.

He almost wrecked the car.

I DIDN’T CHANGE MY MIND

The question that I get most of the time is “Why?” But to be honest, I rarely get to the question portion once someone finds out my plans. When I tell people that I’m not having children—which comes up more and more as I get older—they are often quick to tell me what they think. They will usually pluck one of three seemingly-canned responses from the Why Aren’t You Having A Baby? script.

2. “You’re going to miss out on so much! I swear I never felt unconditional love until I had [insert baby’s name here].”

I get it. There is a great deal bound up in having children, especially for people who have already done it. In talking about this subject, I have been called selfish, indulgent, insensitive (this is, I have found, the only time when people who have had no reproductive issues decide to trot out the very real and painful plight of those who have struggled with fertility), uncaring, unintelligent, and unwomanly for making this decision. I have received more vitriol and personal attacks for this decision than just about anything else, and I have tweeted some really unpopular opinions.

The decision not to have children—my decision—feels like an affront to the so-called “natural order of things.” It dredges up a metric ton of stereotypes which, it turns out, even “woke” women seem to cling to. For centuries, in Western culture, procreation has been one of the only things that people with uteruses have been allowed to bring to the collective table. It’s why women are often thought of as baby-crazy (duh!), and why women who don’t want children are labeled as either withered old crones or somehow broken.

We make babies. It’s what we do. Anything that seeks to shake up that division of labor—puns!—has been resisted at every turn. It is why abortion, which is just medical science, has remained one of the most aggressively politicized procedures of the last 45 years, and why the idea that an employer might have to cover birth control pills became a matter for the Supreme Court to address. In our hearts, many of us just believe that anything that keeps women (and people with uteruses, though I suspect most folks who think I’m a heathen for not having kids don’t support trans men having kids either, but you’d have to ask them) from having children is a Bad Thing.

Deciding not to have children, then, is really bad, because it is even more threatening; while you can pass restrictive TRAP laws (laws that single out abortion providers and impose untenable requirements on them) and make IUDs harder to get, lawmakers have yet to find a feasible way to control a woman’s pesky, independent mind.

But sitting here, writing this essay, I can say from the bottom of my now-sterile womb, that I still feel like a woman. Because if we have decided that child-bearing is what determines womanliness, we have drawn some ugly, ugly lines.

When other people tell me how they feel, it has a derailing effect which, I think, is on purpose. Because rather than actually telling them why I don’t want kids, I have to deflect their commentary about it. Maybe they think that it’s rude to ask (it’s rude to tell me that I’ll change my mind, too), or maybe they don’t want to hear the answers. But there are some answers and, I think, some pretty good ones.

And that is how having a child feels to me—like something I’m supposed to want. I know it is incredibly hard to believe for those who have wanted kids their entire lives, but I just don’t feel that way. Which doesn’t mean I hate children. I adore the children in my life and often joke that I am a certified Cool Aunt. I love to nurture kids and read to them, and every year in September I wonder if it was a mistake to leave the teaching track. I have a deep interest in fostering or adopting once I’m more financially stable. But as for having a biological child, the desire is just not there. And I don’t think that’s a switch that suddenly shifts someday.

There’s also one other thing—the one that makes people feel kind of bad if we ever get to this point in the conversation (which we seldom do). I have astronomical concerns about passing my mental illness along to a child who shares my genes. There is no soothing answer for that and I don’t expect one. The roaring in my head, my gale-force mood swings, and my inability to feel even remotely calm sometimes are issues that have swirled around me for the entirety of my life. I cannot, in good conscience, create a whole new human being using my genetic material knowing that they might be subjected to that. I just can’t.

So that’s why. But again, it’s rare that I ever get to express any of that. Too often, I get told what I should think, how I should feel. How I will feel.

It’s too late now, though. I finally had the surgery. The factory is closed. And I am elated.

These suppositions—all of them—are what led me to waiting a decade to get the surgery. Each year as I lay prone, feet in the stirrups, for my annual pelvic exam, I would inquire about it.
In response, I would have another option foisted upon me. I have tried every form of birth control under the sun and have been miserable with each and every one. I have endured IUD insertion and removal, a rash from the exorbitantly expensive patch, and biblical periods on various pills.

And then finally, I got a “yes.” I got a yes from a young male doctor with a handsome smile and a cheery attitude who trusted me to make my own decisions. He made it easy and comfortable, and never once asked me what my boyfriend or partner or husband thought. (For the record, my partner supports me fully and also doesn’t want children. Not that anyone has ever asked him about it.)

Within a month of getting approved, I was booked for surgery. I arrived early in the morning and moved quickly through the process. Though having one’s “tubes tied” is the most common terminology, that’s not actually what happened to me. My doctor performed a procedure called a “bilateral tubal salpingectomy,” which means instead of just cauterizing the fallopian tubes or clamping them shut, he actually removed the tubes entirely, which emerging research has shown reduces the risk of ovarian cancer later in life.

The surgery took less than an hour; I was home by early afternoon. That night, I felt well enough to walk the dog around the block. And unlike my birth control, which has been a constant expense I had to budget for, my surgery was covered completely by my health care plan; sterilization, it turns out, is something that you don’t have to pay for. Who knew?

On Facebook, I’ve still remained vague. I haven’t wanted to get into it, or make people uncomfortable, or invite critique on a choice I’ve already made. Maybe if I share this article, folks will bother to read past the headline. Though in my experience, it seems unlikely.

Why I Had A Breast Reduction At 18

Tags: sterilization , tubes tied , motherhood , maternity
Support Feminist Media! During these troubling political times, independent feminist media is more vital than ever. If our bold, uncensored reporting on women’s issues is important to you, please consider making a donation of $5, $25, $50, or whatever you can afford, to protect and sustain BUST.com. Thanks so much—we can’t spell BUST without U.