Details
BY Mimi Matthews
IN Living
Published: 29 May 2019 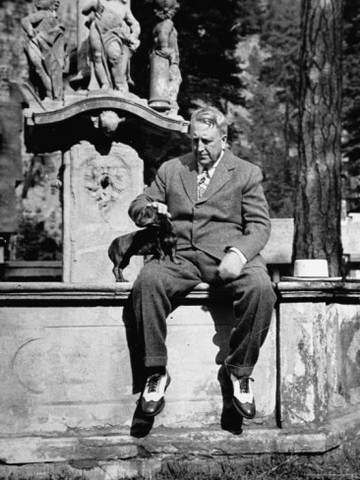 With their short legs, long bodies, and oversized personalities, the Dachshund is one of the most easily recognizable of all dog breeds – as well as one of the most popular. Developed in Germany more than 500 years ago for hunting badgers (dachs is German for badger), the Dachshund has since won its way into the hearts and homes of such historical luminaries as Queen Victoria, Pablo Picasso, and newspaper magnate William Randolph Hearst.

Hearst was not the most well-liked man of his time, but as hardnosed as he could be when it came to his business, he always had a soft spot for his dogs. His favorites were the Dachshunds he bred at Hearst Castle, his palatial estate in San Simeon, California. Toward the end of his life, when most of the other animals were gone – including the inhabitants of his private zoo – Hearst still kept more than seventy Dachshunds in his kennels. 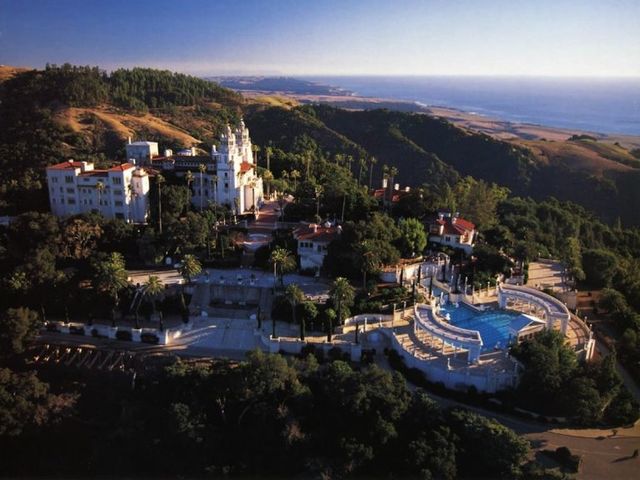 Hearst’s “personal Dachshund” was a miniature smooth-coat named Helen. She, along with Gandhi, the Dachshund of Hearst’s companion Marion Davies, had the run of Hearst Castle. At dinner, Helen and Gandhi sat on velvet cushions. When Hearst, Marion Davies, and their guests watched movies in the private theater, Helen and Gandhi joined them. There was even a tiny ladder in the swimming pool, placed there in case one of the Dachshunds should ever fall in and could not get out. 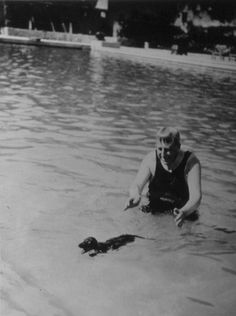 William Randolph Hearst swimming with one of his Dachshunds.

Helen died in 1942 at Wyntoon, Hearst’s private estate in Siskiyou County, California. Hearst was inconsolable. In answer to a letter of condolence from his editor, he wrote the following eulogy to Helen and published it in his “In the News” column:

“A boy and his dog are no more inseparable companions than an old fellow and his dog. An old bozo is a nuisance to almost everybody— except his dog. To his dog he is just as good as he ever was— maybe better…

Anyhow the dog and the old guy understand each other and get along “just swell.” So I do miss Helen, I was very fond of her. She always slept on a big chair in my room and her solicitous gaze followed me to bed at night and was the first thing to greet me when I woke in the morning. Then when I arose she begged for the special distinction of being put in my bed…

Aldous Huxley says: “Every dog thinks its master Napoleon, hence the popularity of dogs.” That is not the strict truth. Every dog adores its master notwithstanding the master’s imperfections of which it is probably acutely aware…

Helen died in my bed and in my arms. I have buried her on the hillside overlooking the green lawn— where she used to run— and surrounded by the flowers. I will not need a monument to remember her. But I am placing over her little grave a stone with the inscription: 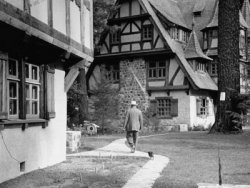 William Randolph Hearst and either Helen or Gandhi at Wyntoon.

Thus concludes another of my Friday features on Animals in Literature and History. To learn more about Dachshunds like Helen or to adopt a Dachshund of your own, I encourage you to visit the following sites:

How Georgian And Regency Literature Shaped Society's View Of Cats

Tags: mimi matthews , hearst castle , william randolph hearst
Support Feminist Media!
During these troubling political times, independent feminist media is more vital than ever. If our bold, uncensored reporting on women’s issues is important to you, please consider making a donation of $5, $25, $50, or whatever you can afford, to protect and sustain BUST.com.
Thanks so much—we can’t spell BUST without U.