How I Almost Missed Breakfast With Maya Angelou 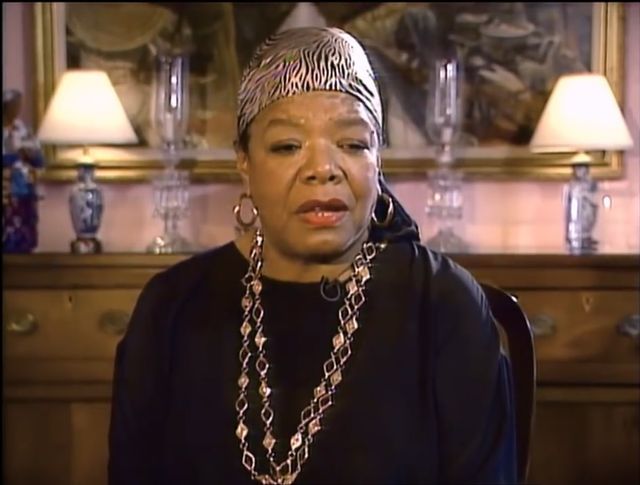 The life of a freelance writer may not be the most rewarding one financially — but it certainly provides some fascinating experiences. I was browsing through the racks in a musty CD store in New York’s east village one afternoon in December of 2005 when I got a call from a friend of mine who is also a writer-producer. He said that the radio network he works for was trying to secure an interview with Maya Angelou for the next morning. If they got it, they would need someone to literally record the interview in Dr. Angelou’s Harlem apartment. Was I interested?

That part was easy — of course I was interested! The main obstacle — assuming the network was able to get the interview — was, how was I going to get up to Harlem? For those who don’t live in New York, Harlem is uptown. I live downtown. The day of the projected interview — December 21st — was right in the middle of Manhattan’s first transit strike in 25 years.

On the morning of the 21st, I got a call from Tom, the producer in L.A. who was actually going to be doing the interview. It was 8:45 New York time. Tom said he was waiting to hear back from Dr. Angelou’s people. It still hadn’t been determined whether the interview was going to happen — but if it did, it would have to take place at 11:00 am. With the transit strike still in full swing, I decided my best move would be to start walking. I figured that if the interview was on, there’d be no time to waste in getting uptown, where I had to pick up the DAT machine to record it, before heading further uptown to Harlem.

I was somewhere in the 20’s, on Fifth Avenue, when I heard from Tom again; the interview was on! Now the stakes had been raised. I basically hauled ass for the next 20 blocks or so, oblivious to whatever (or whoever) was in my path. I had now entered the zone of By Any Means Necessary.

I arrived at the network offices in midtown Manhattan, where my friend was waiting with the DAT machine. Step One had gone well, but there was still the question of how I was going to get to Harlem – which was about four miles further uptown – by 11:00 am. Tom had told me earlier that he would set me up with a car service. But when he tried to do this, they told him that because of the strike, traffic on 6th Avenue was bumper to bumper; it could take hours to get a car to me. It was now 9:45 am.

I’m originally from Connecticut and I still get up there maybe once a month. At some point, I remembered that the train I take to Connecticut – which would not be affected by the strike – stops at 125th Street in Harlem to discharge passengers. Taking matters into my own hands, I hauled ass again – this time to Grand Central Station, to catch the one train that would get me to Harlem in time to do the interview. I made this train with about five minutes to spare.

It took me very little time to get uptown once I’d made the train. Within 15 minutes, I had arrived at the station on 125th Street. From there, it was a 10-minute walk to Dr. Angelou’s building. The feeling of walking through Harlem on a brisk December morning to Maya Angelou’s apartment was nothing short of intoxicating. The fact that I’d made it up there during a transit strike, by the skin of my teeth, only heightened that feeling.

Once I got to the building, I was greeted by Dr. Angelou’s assistant, a personable woman named Lydia Stuckey. She told me to get situated while she went upstairs to let Dr. Angelou know I was there. “We weren’t expecting you so early,” she said. “Neither was I,” I replied. Lydia then went upstairs and I began setting up my recording gear.

Somewhere around this time, Tom called from L.A. I think he was a little stunned to learn that in less than 45 minutes, I’d made it from the office to Grand Central Station to 125th Street to Maya Angelou’s apartment! As it turns out, I had some downtime after setting up my equipment and Tom asked me to describe Dr. Angelou’s living room. Neither of us is exactly a newcomer to this business and yet we were acting like two kids in a candy store.

I waited a bit longer and eventually I heard someone coming down the stairs. I thought it might be Lydia Stuckey, but as it turns out it was Dr. Angelou herself! She was descending the stairs slowly and using a cane. “There is an elevator in this building,” she said, by way of introduction. “But I refuse to use it unless I absolutely have to. You’ll pardon me if this isn’t the most graceful way of getting around.” “There are different forms of grace,” I said. “This is true,” she replied. When she got downstairs, Tom called from L.A. and the interview began.

During the interview, Dr. Angelou talked about her new poem, “Amazing Peace,” which she read December 1st, at the White House as part of the National Christmas Tree lighting. She talked about her son, Guy Johnson, who is also a writer and who she called “the monument in my life.” She talked about how courage is the most important of all virtues because without it you can’t practice any other virtues. She was eloquent and elegant and exuded wisdom without pretension. I could have listened to her speak for hours, but the interview ended after 15 minutes or so.

When the interview was over, I turned off the tape recorder and thanked Dr. Angelou. She said that she was going to have a cup of coffee and asked me if I’d like one. Somehow I managed not to leave the ground when she said that! I told her that yes, I’d love one and we then headed downstairs, where Mrs. Roberts, who worked for Dr. Angelou, set us up with coffee and pastries.

I rub shoulders with celebrities not infrequently, and I never ask for autographs. But I wanted to ask Dr. Angelou for one — not for me, but for someone I know. Lehna is the daughter of one of my close friends; she was 17 at the time and a big Maya Angelou fan. I told Dr. Angelou about her and asked her if she would mind signing an autograph. Not only did she agree to do that, but she went one step further — she took a copy of one of her books, the poem “Phenomenal Woman,” and dedicated it to Lehna with an inscription from herself and me.

I don’t remember everything Dr. Angelou and I chatted about over breakfast. I do remember that at one point, I told her that over the past year, I’d had the most amazing experiences of my career — this one included — but that I’d made the least money of my career. “Keep doing what you love,” she said. “And the money will come.”

After awhile, I packed up my recording gear and got ready to leave. As a bonus, I got a ride back to midtown Manhattan with Mr. Roberts, another member of Dr. Angelou’s staff. He let me off on 56th Street and from there I walked back to the office, where I dropped off the DAT machine and we overnighted the tape to Tom. The whole experience was at once high-energy and surreal. It really felt like the stars were in alignment, as they say; a lot of things could have gone wrong, but they didn’t.

There is also a serendipitous postscript to all this, which ties things up really nicely. When I spoke with my friend Janice — Lehna’s mother — about the whole experience, she told me that “Phenomenal Woman” is Lehna’s favorite of Maya Angelou’s poems! I had no idea this was the case when she gave me the book. It makes sense, though, and I have my own interpretation of what it all means. Few would argue that Dr. Angelou (who was 77 at the time of our meeting) was a phenomenal woman. By giving a copy of her poem to Lehna, she was essentially passing the torch to someone 60 years her junior — someone who, I think, has gone on to become a phenomenal woman herself.

This piece originally appeared on Medium and is reprinted here with permission.

Test Your Maya Angelou Knowledge With This Quiz

If I Had Not Been Born A Black Woman

Tags: Maya Angelou , breakfast
Support Feminist Media!
During these troubling political times, independent feminist media is more vital than ever. If our bold, uncensored reporting on women’s issues is important to you, please consider making a donation of $5, $25, $50, or whatever you can afford, to protect and sustain BUST.com.
Thanks so much—we can’t spell BUST without U.