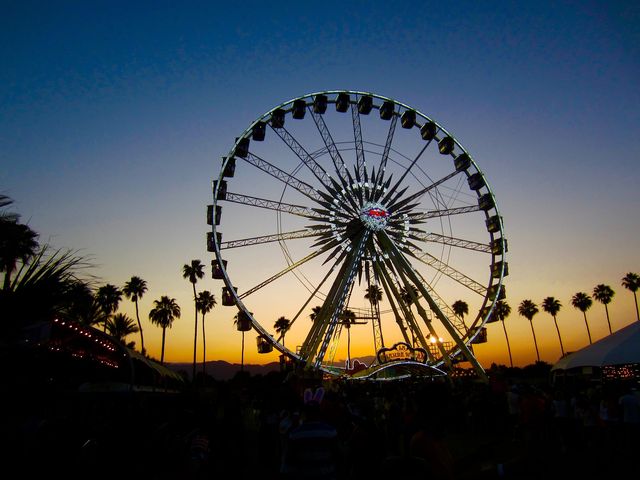 Last year, I attended the Coachella Valley Music and Arts Festival for the first and last time. Coachella, one of the largest music festivals in the world, takes place in Indio, California at the Empire Polo Club in the Coachella Valley. This year marks its twentieth anniversary (although the festival skipped one year, 2000 due to financial troubles) and its seventh year as a two-weekend event. In a 2003 LA Times article, Paul Tollett, one of Coachella’s founders stated that having big name sponsorships “shows a lack of respect for your audience and the music.” Now, sixteen years later, by his own standards, it seems that Tollett possesses the same amount the amount of respect for “the audience and the music” as Donald Trump has for women and people of color.

But present-day Coachella hardly resembles its original iteration. Coachella is now an exclusive, celebrity-studded mega fest. Though it has not reached the infamy of the failed Fyre Festival, Coachella taps into the same insecurities and weaknesses of millennials. In its current form, Coachella is more than just a festival; it’s a cultural experience that, if examined closely, reflects an ugly blend of capitalism, appropriation, and mind-control.

C IS FOR CAPITALISM
In 2010, Coachella’s organizers did away with single-day passes, instead offering three-day passes as the only ticketing option. Despite these changes, daily attendance climbed from ap-proximately 51,000 in 2009 to 75,000 in 2010. In 2012, when Coachella grew from a one-weekend-engagement to a two-weekend-cluster, ticket sales broke the Internet once again and the gross revenue almost doubled from $24.9 million in 2011 to $47.3 million in 2012.

Coachella has continued to grow steadily since 2012. In 2017, Coachella had more than doubled its gross revenue and almost doubled as its attendance, reaching $114.6 million in the former and 125,000 in the latter.

But just as everyone knows that restaurants make their money on booze, we also know that ticket sales is just one of many revenue streams. Sponsorships, goods and services sold, and ancillary services or up-sells, e.g. “glamping tents,” merch, or the $30 cell phone battery pack that you must buy because your phone dies because there’s not enough bandwidth for 100,000 people in one square mile to connect to the internet. Coincidence? I think not.

Alright, you ask. What about VIP passes? The VIP Pass is a truly laudable scam. VIP lounges are swanky, replete with ornate hedges, statues, and fountains, all reminders that, yes, you’ve chosen to spend your weekend at polo club. The bars are fancy, serving upscale cocktails with the likes of elderflower liquor and popular restaurants from LA serve everything from papusas to vegan grain bowls to Asian-Fusion burritos, as opposed to the food stands in GA which are simply labeled for what they are, e.g. “sausages” or “ice cream”—the equivalent to Kirkland brand toaster waffles. I’d like to remind you that these offerings in VIP are not free. Not only do you pay more for the pass, but those extra dollars simply afford the opportunity to spend more on expensive things. And for the record: the bathrooms in VIP are no better than those found in GA, arguably worse in fact. (Not quite Fyre Festival level scamming, but an impressive feat nonethe-less.)

The cherry on top of this vegan ice cream sundae called VIP is that every time one wants to leave an area, it’s prohibited to bring adult beverages through the gates. Thus, attendees are encouraged to either toss their sixteen-dollar drinks or chug them, so that they can go to another section and purchase another round. A capitalist scam that encourages binge drinking for the sa-ke of profit!

It’s not mind-blowing that Coachella does everything it can to maximize profits. It’s a business. But the festival preys on the consumer ideology that you can buy happiness through experiences. American Cultural Historian, William R. Leach addressed what is at the core of consumerism in his 1993 book, Land of Desire: Merchants, Power, and the Rise of a New American Culture. He traced American consumer culture to the aftermath of the Industrial Revolution. “By the end of the [nineteenth] century, however, commercial capitalism had latched onto the cult of the new, fully identified with it, and taken it over.” This was the historical turning point at which Ameri-cans really became Americans, living according to the dogma of buying more, buying newer, and buying happiness.

By changing aspects of the festival every year, Coachella continues to serve up that new new fundamental to consumerism. This placates repeat-customers and entices new customers. In ad-dition to a different lineup each year, there are also new food vendors, art installations, and sur-prise performances. (An exception is the “iconic” Ferris Wheel, which returns every year be-cause in addition to newness, people still want familiar—recognizable proof to post on Instagram.)

C IS FOR CONSUMERISM
In his examination of this “cult of the new,” Leach acknowledges that nothing in American cul-ture has ever truly been new. By the end of the nineteenth century, “innovation became tied to the production of more and more commodities. Fashion and style were at the center, appropriating folk design and image, reducing custom to mere surface and appearance.” The TLDR: the idea of an extant, popular American culture has been a sham for over a century. Everything is an appropriation. (Anyone else trying to forget the appropriation of Native American headdress a few years ago?)

Speaking of fashion, no conversation about Coachella is complete without an acknowledgment of the marketing efforts surrounding the so-called ‘Festival Season.’ Over the past eight years, Coachella has become a commercial holiday for which one is encouraged to acquire a new ward-robe. Before attending, I’d seen pictures from previous years and assumed the wacky outfits were the sartorial extremes. I was mistaken. Almost everyone dresses in costume, probably ap-propriated from celebrity fashion—think Met Gala meets Victoria’s Secret Fashion Show—and Burning Man’s costume culture, both factions highly visible on Instagram. At fast fashion retail-ers, these outfits are now as accessible as store-bought Halloween costumes.

One theory explaining Coachella’s commercial success might be the business acumen of the production company, AEG, and its subsidiary, Goldenvoice. Another theory, however, is that America had a historic cultural moment, in a big way, between 2010 and 2012. This theory pos-its that the rise of content sharing apps (Instagram launched in 2010), the revolutionizing of mu-sic accessibility via streaming (Spotify launched in the US in 2011 and integrated with Facebook that year) and the growing collective obsession with celebrities contributed to Coachella’s growth.

C IS FOR CULTS
Given the level of hype surrounding Coachella, I attended the festival with a healthy dose of skepticism but also with what I consider a fairly open mind. Immediately, I noticed similarities between yearly Coachella-goers and cult members. Coachella might not be an actual Rajneeshpuram-level cult, but it operates on many of the principles outlined by cult-scholars.

In her research on brainwashing and cults, Alexandra Stein references psychologist Dr. Margaret Singer’s Cults in Our Midst (1995), in which Singer outlines six conditions of cultic control. Most of these conditions lined up with my experience of Coachella. Control the person's social and/or physical environment; especially control the person's time. Systematically create a sense of powerlessness in the person. Manipulate a system of rewards, punishments, and experiences to promote learning the group's ideology or belief system and group-approved behaviors.

At Coachella, the disorientation begins immediately. Everyone dresses in costume. It’s so hot, one needs sunglasses and/or a hat, so noisy that one needs earplugs, and so dusty that one needs a mask or bandana. Each of these accessories increases the sensation of disorientation and power-lessness in dry, hot, and dusty conditions. The closest drop-off point for festivalgoers is approximately a mile away from the event. Attendees must walk through fenced-off passages with no maps or legends. Even inside the festival, there are few, if any, maps. I believe that there are small, poorly drawn maps in the program brochures but even these are hard to come by.

Perhaps these conditions would not be problematic at a smaller event but let me help you visual-ize the size. Coachella spans the seventy eight-acre Empire Polo Club grounds but when ac-counting for parking and camping spaces, it covers over 600 acres, almost one square mile across which attendees must traverse in order to reach the entrance. The 78-acre club can host 125,000+ attendees; (University of Michigan’s “Big House” stadium, the largest in the country, hosts only 115,000.) In other words: Coachella is big. Not knowing how to navigate an enormous crowded place, I had to move with blind trust.

The nature of festivals requires faith in the organizer and an acceptance of rules and social norms within a confined space. (And we all saw how well that went when the organizers were Billy McFarland and Ja Rule.) Festivals are not real life, but they are controlled environments and therefore someone is doing the controlling. Over the two days I spent at Coachella, I experienced a nagging sense of powerlessness inside the grounds. I knew that if I needed to leave, it would take around forty minutes to reach an exit. I didn't know how to find anything or contact anyone if I got lost.

From the confines of a swaying Ferris wheel container, I experienced a moment of doubt. I began to question my own question-less-ness. Why should I trust this ride to be safe? Is a transportable Ferris wheel a good idea? Are there trained professionals operating this machinery? Are they sober? Is this Ferris wheel unusually large? How will I ever get out of here?

As my paranoia increased (and the ferris wheel seemed to be stuck very high in the sky), I promised myself that I would always question things before doing them. Fortunately, I didn’t have to suck any dick to leave Coachella. I simply didn’t return for the third day.

A Brief History Of Coachella, Unparalleled 'It' Festival

SheROO Is Bonnaroo's Mini Feminist Festival And It Looks So Fun

Rachel Zarrow is a writer living in San Francisco. Her work has appeared online at The Atlantic and in print in the San Francisco Chronicle, among other places. She is currently working on her first novel. Find her on instagram and twitter @rachroobear and www.rachelzarrow.com.