Why I Had A Breast Reduction At 18 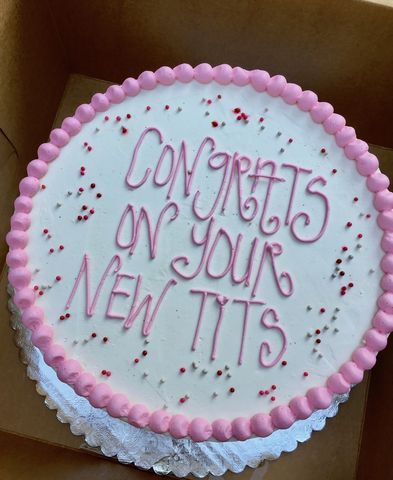 Puberty fucking sucks for everyone. But when I was in sixth grade I found myself in a Nordstrom’s changing room with a sweet middle-aged woman measuring my chest. In that moment, I knew I was in for an especially shitty transition to what my teachers called “womanhood.” As a kid, I had loved all things shiny and new, so of course when I was in fourth grade I hadn’t thought twice about having to wear my pastel blue and purple cotton bras with metallic trim. To be honest, the concept of a bra had never even phased me as anything other than a new piece of clothing to buy at Target (hell yeah!).

What wasn’t as fun was that my boobs kept growing, even when other parts of me didn’t. It didn’t dawn on me that my boobs were actually a curse until I was a sixth grader with C-cups, confronted with only one option: beige.

Even though absolutely no one would be seeing my bra, there is still something really saddening about being eleven and having to wear the same bra as your mom. But for awhile, it was all I knew. During puberty, it’s hard not to think about every single little change your body goes through and compare yourself to those around you. For me, it was hard to pretend I didn’t notice I was the only girl in my class with boobs, and it was even harder to pretend I didn’t know that everyone else noticed as well.

Soon enough I found myself experiencing back, shoulder, and neck pain as a result of my uncomfortably large chest. But the physical toll it took on my body never compared to the mental toll.

Every gym class I would change in a bathroom stall or the corner of the locker room, trying to hide while I attempted to squeeze myself into two sports bras because one just wasn’t enough. It’s not that other girls would criticize me for it. It was just that no one understood how I felt or why I needed to wear more than them, and I couldn’t help but feel embarrassed about my body.

There was a part of the first Pitch Perfect movie that stuck with me for years. There is a scene where some of the male characters snicker while they make fun of a girl with large areolas that they maliciously call ‘salami nipples.’ They made comments about her needing to put on a bra—that her large areolas were not something to be proud of but something to be hidden.

This insignificant moment of the film may have seemed funny to other viewers, but as a fourteen-year-old girl with large boobs that I had no control over, it cut pretty deep. I felt gross and I hated myself because my chest was exactly what kids my age made fun of: downward-facing nipples and palm-sized areolas. My body lacked proportion and my boobs were the furthest thing from perky. The funniest part is that high school boys would talk about how much they loved big boobs, but only if they were perky; I guess they didn’t pay much attention when we learned about how gravity works. But criticisms of women and girl’s bodies aren’t often logical, anyways.

By my senior year of high school, I wore an F-cup bra. Despite being a burgeoning feminist and a leader of the feminist club on campus, I still couldn’t come to terms with accepting my body the way it was. I tried to be confident and love myself and my boobs, but they remained both a physical and a mental barrier to my self-confidence. Throughout middle and high school, they had become a part of me that I went out of my way to hide.

It wasn’t until my freshman year of college that I decided to get a breast reduction. I had toyed with the idea in high school, but knew my chances were unlikely so I tried not to get my hopes up. I had a couple awkward sexual encounters during my first year of college where I refused to take my bra off because I felt so insecure about my chest. It was starting to feel like my greatest fear was inevitable; that I would eventually have to bare my chest to someone in order to be fully intimate. The thought of someone seeing me nude repulsed me because of how much I had come to hate my boobs. Though my main reasoning for going through with the surgery was a lower back injury from high school, I would be lying if I said my self-hatred didn’t impact my decision as well.

The procedure itself was difficult to say the least, but I had a friendly woman as my surgeon that made the entire process a lot less terrifying. I got pretty lucky because she was the first doctor I met with and I immediately knew it was a good fit. I would definitely recommend that anyone interested in the procedure finds a doctor that they feel comfortable with. But, I recognize that this can be difficult and isn't always an option, as I myself have had a fair share of unpleasant interactions with doctors.

I flew home to California over my freshman year spring break for my initial consultation. I then met with my surgeon again a couple times once I was home for summer in order to submit my insurance claim and talk logistics. I was also pretty lucky in this sense because my insurance covered the majority of the costs. This was primarily because of my back injury, but also because I'm still on my parent’s insurance policy. (Even if this isn't the case for you, I think it is still worth it to explore your options if you are interested in the surgery.) Come July 13, I found myself in a green hospital gown, knocked out on an operating table with purple marker lines drawn all over my tits.

The surgery entailed removing tissue and restructuring the breasts and areolas. I remember being wheeled out of the hospital by my mom and a nurse with a barf bag in my hand, which came in handy on the car ride home. That first day at home after the surgery is now mostly a blur because they had given me Vicodin for the pain. My mom made me broth and my sister helped me empty my surgical drains. (That’s one of the less glamorous parts of the surgery: you have tubes coming out both sides of your body draining excess blood into small egg-shaped silicone drains that have to be emptied periodically. It was at that point I felt lucky to have an older sister weirdly unphased by blood.) 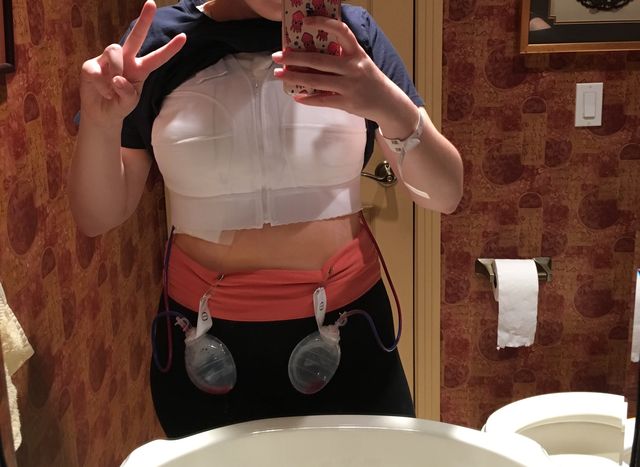 In the first few days after the surgery there were times where my chest felt like it was on fire. Thankfully, it didn’t last too long and the pain medications helped. On the upside, I got to wear a really chic white zip-up surgical bra. The bra, though it made me feel like I had aged sixty years, was my best friend for weeks after surgery.

Taking my first post-op shower was really painful and difficult, so I kept the bra on. Just lifting my arms up hurt, so I couldn’t do much to clean myself. I wasn’t allowed to take it off for the first few days and I was dying to peek at my new boobs. Looking at them for the first time was simultaneously really exciting and scary. I was terrified of regretting my irreversible decision, but my new tits were so cute! They were yellow and bruised and my scars were beginning to scab, but I loved them nonetheless. I made sure to show everyone in my family that would look, and sent photos of my bare chest to all my friends.

Now, almost two years later, I’m fully healed and in love with my chest. Healing took time and I just had to accept that as part of the process. I slept in my surgical bra for months post-op because I felt more comfortable that way. My sophomore year roommate probably still has my bare chest ingrained in her memory because of all the nights I would sit at my desk topless applying scar gel. At first I had hoped my scars would fade, but even though they didn’t, I’ve come to love them.

A lot of people ask me why I had the surgery done and if I’m happy that I did it. I tell them about my aching back and indented shoulders and they understand. But, the part that I don’t always tell is the part that is harder to understand. My boobs made me feel isolated, embarrassed, and ashamed. I wish it hadn’t taken a physically altering surgery for me to feel comfortable in my body. I sometimes feel weak and disappointed in myself knowing that I gave in to conventional beauty standards, and in this sense, I wish I hadn’t. However, I don’t regret my decision because I no longer experience the extra pain on my lower back that my boobs would bring, and I don’t have to wear two sports bras to work out.

Occasionally I forget that I ever even had big boobs, and that makes me feel sad, like I’m betraying myself by being happy in my new body. But, even just writing this now has made me feel proud of my younger self for being so strong. Because even though a physical part of me was removed, I’m always going to be the girl in the corner of the locker room. Despite all the pain, I love that about myself, and I am happy that I did it. In fact, it’s probably one of the best decisions I’ve made.

So, my note to anyone that wants to have a breast reduction: do it, but do it for yourself and no one else.