Dumpster Diving 101: What To Know Before You Go 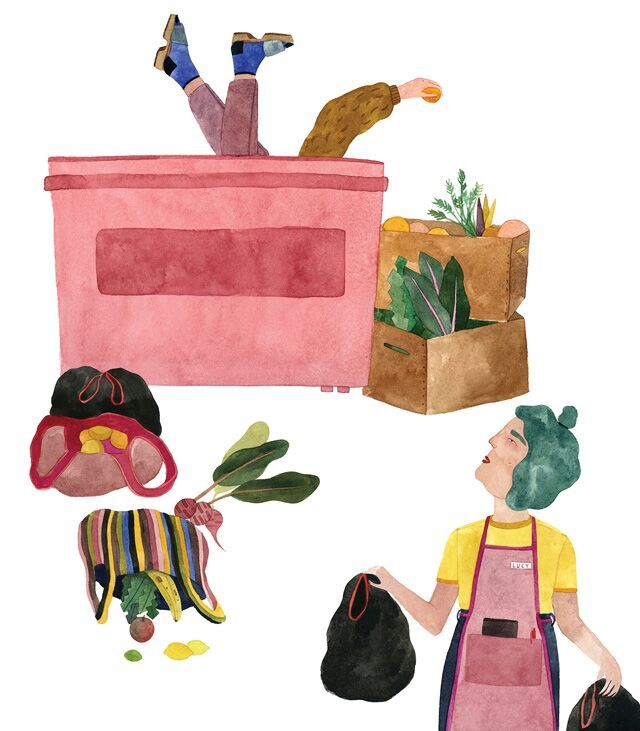 The first 20-plus times I went dumpster diving, it was out of necessity. I was raising three small children and to supplement our meager grocery budget, I’d sometimes make use of the “expired” goods that grocery stores threw out. Thanks to random dumpster scores, I learned how to cook with zucchini and ate the best-tasting, juiciest mango of my life, discarded because it was just over-ripe.

At its core, dumpster diving is punk rock—most people find the idea of climbing into a stinky bin abhorrent—and an easy way to “stick it to the man” while protesting capitalism and excessive waste. Also: free food! Unsellable food policies are store-specific, but you may find everything from dented canned goods to ripe or wilted produce to bread and baked goods several days past their “sell by” date (which, according to the FDA, refers to quality rather than safety, but judge with your senses, too). Generally the best time for dumpster diving is in the wee hours of the morning, or at night just after closing. If a store is closed on Sunday, you’ll likely find a dumpster bounty on Monday. Fortunately, most “dumpster diving” doesn’t actually involve climbing into a dumpster. Plenty of markets put produce and perishables in boxes next to the dumpster. But dress as though it’s a possibility. Wear comfortable shoes that you’re not afraid to get dirty, and carry hand sanitizer and/or baby wipes—sometimes a store’s discarded produce actually is dumpster-worthy.

While there are local codes that might prohibit dumpster diving, it’s legal at the federal level thanks to 1988’s Supreme Court case California v. Greenwood, which ruled that when a person throws something out, that item becomes part of the public domain, aka free for the taking. Entering a property after hours or getting in the dumpster itself, however, might be prohibited. So make sure there aren’t any “No Trespassing” signs in the area. If you get caught by a grumpy store manager or law enforcement, remain calm and polite during questioning, and namedrop Greenwood for good measure. But that’s unlikely—in my dozen or so years of sporadic diving across several states, I have yet to be bothered by authority figures.

Finally, follow dumpster diving ethics: take only what you’ll actually eat, leaving the rest for those who follow. Happy diving!

The Art of Eating In: How I Learned to Stop Spending and Love the Stove

Tags: trash , dumpster diving , saving money , food , food , dumpster diving , saving money , trash
Support Feminist Media!
During these troubling political times, independent feminist media is more vital than ever. If our bold, uncensored reporting on women’s issues is important to you, please consider making a donation of $5, $25, $50, or whatever you can afford, to protect and sustain BUST.com.
Thanks so much—we can’t spell BUST without U.