Understanding The Queens In Tarot

All four Queens in the Tarot represent and embody four different types of women, and are classified by the four elements: the Queen of Wands (Fire), Pentacles (Earth), Swords (Air), and Cups (Water). They represent the doer, the provider, the intellect, and the nurturer, respectively. The Queens embody all sides of the feminine spirit, as they are the manifestation of the element (suit) which they represent. They represent our feelings and emotions, aiming to give energy and sentiments to situations. The ultimate feminine and most powerful card in the Tarot is the Empress. She is the giver and healer of life, beauty, and creation. In order to understand the Queens and Empress on a deeper level, BUST spoke with several Tarot readers to gain deeper knowledge of these cards in the Tarot.

“All Court cards customarily represent a whole person and their personality traits in a reading, but occasionally they indicate a situation and what personality traits you may need to encompass in order to handle it best. Each of the four suits has a Queen card that possesses very different traits, skill sets, and experiences we all can identify from time to time in our lives. There is a fairly common belief that all of our Queens represent 'divine feminine energy,' and I would agree that they do to a certain point, but I also insist that the idea of gender, in energy or otherwise, doesn’t actually exist, so you should never get hung up on any court card ever representing exclusively males or females. As for the ‘ranking’ of Queen vs. the inferior Knight card or the more advanced King card, it’s less about levels in terms of hierarchy and more about evolution of self—emotional, mental, physical, or economic maturity, depending on which suit it comes from. So we can go ahead and smash the patriarchy in two different ways with this court card. Yass Queen!"

“A Queen card Tarot spread helps you to get in touch with the energies of each Tarot Queen and how you can manifest their energy into your own life. Pull the four Queens from the Tarot deck, placing them in a horizontal row. Shuffle the deck, then draw two cards for each of the four Queens. Place one card above each Queen and one card below each Queen. The card below the Queen represents what you already have going for you or what you’d like to release; the card above the Queen represents what you’d like to bring into your life and subconscious guidance from the Universe.”

The Queen of Wands 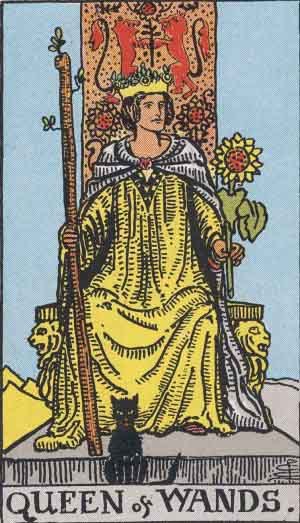 The Queen of Wands is the fiery, independent career woman who can take care of herself and others.

“The Queen of Wands is the epitome of being a badass woman. Bold, commanding, alluring, magnetic, powerful and cunning, there is nothing that she won't do to achieve her goal. Rather than wait for things to happen, she's aligned with her worth and knows that she has the ability to make anything happen herself, so her ambition and desires run extremely high. When pulled, her energy reminds us to live our best lives, not to fear the opinions of others and never compromise on our own light and leadership abilities. We can feel compelled to exude our sexuality in a way that makes us feel controlled and are not shameful to use it and other innate talents, to manipulate any situation at hand to our will. There is a mystic allure to the Queen of Wands that is hinted at by the Black Cat at her feet in the Rider-Waite illustration, which resonates with other mystic women of power. It's a tongue-in-cheek way of displaying her fearlessness of exploring the unknown, even if this means her own subconscious world and the ways of the occult. And a woman that knows herself and is fully accepting of that, is one of the most powerful of them all—this is why the Queen of Wands stands out to me above the rest. Her character ignites and initiates, as a fire-starter, she is needed to propel world changing ideas into action.”

The Queen of Pentacles 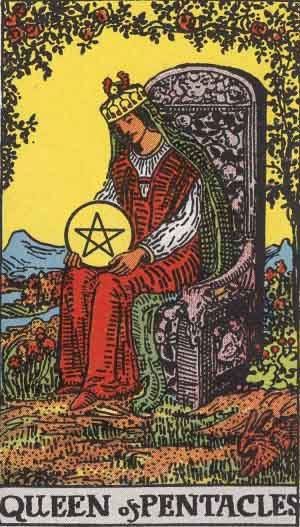 As the Earthy Queen, the Queen of Pentacles represents home life, and physical and material security (money, food, clothes, and sensibilities—all of which are considered to be the material world).

“When I think of the Queen of Pentacles, it’s really hard for me to not immediately think of finances and wealth. I think she epitomizes the modern woman; someone independent, hard-working, and YES, someone who CAN have it all! In the Rider-Waite deck, she is depicted as a sitting queen holding just one Pentacle. She is pensive, and it is obvious she is willing to protect what she has BUILT for herself. One of my other favorite Queens of Pentacles is in the Santa Muerte deck by Fabio Listrani. In this deck, she is not sitting, she is climbing up a ladder, looking up to her opportunities and looking forward to her growth. I like this image because it is more active and forward-thinking than the traditional sitting queen. In a spread, she often represents abundance, both in the material and spiritual world, and the obvious message to protect what you have worked hard to get. I consider all the Queens in the deck equally important, but this one stands out to me most when I need reassurance that my efforts will pay off."

The Queen of Swords 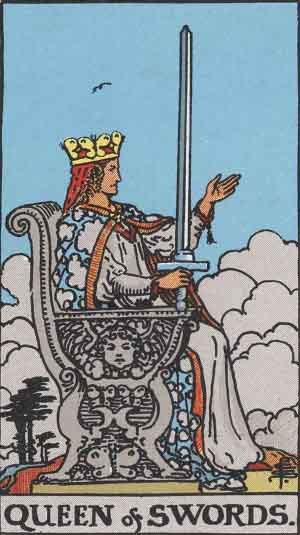 The Queen of Swords is the feminine manifestation of Air, a smart and intellectual woman who uses her wits and brain to achieve her goals.

"The suit of Swords deals with our mental landscape, and often serves as a reminder to lead with our minds and not our hearts in our current situation. The Queen of Swords is all about mental clarity and the wisdom that comes with age, maturity, and experience. She is analytical, stoic, and blunt with her words, and often seen as what some might say is a ‘cold, icy bitch,’ but it is just because she makes decisions strictly with her brain and does not let her emotions get involved. The Queen of Swords is an excellent communicator and has no problem being direct and saying exactly what she means. She is definitely not going to sugarcoat anything that must be said. She is fiercely independent and knows how to create strong boundaries, and demands that others' respect them as she respects theirs. I think of the Queen of Swords as an excellent inspiration for women who are entrepreneurs and starting their own businesses. She serves as a reminder to embrace our masculine energies and to be unapologetic in doing so.”

The Queen of Cups 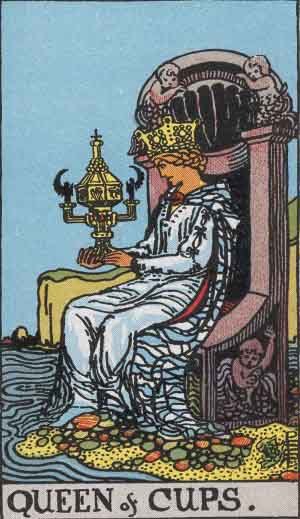 The Queen of Cups is depicted as a woman who sits alone by the sea. She is the purest form of Water. She represents raw emotion, love, and intuition.

“The Queen of Cups is ultimately about a highly developed emotional intelligence and understanding of love. This type of understanding goes beyond any surface level interpretations of what might be going on in the relationship/situationship and helps us to transcend outward information and reveals the inward interpretations. Once we look deeper the reading starts to reveal more information, and when the Queen shows up, it's time to look deeper and tap into our innate foresight. This a truly initiatory card.” 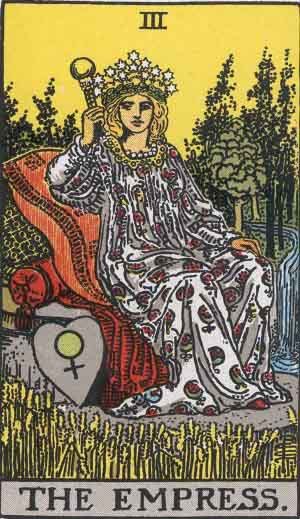 The Empress is perhaps the most powerful feminine archetype in the Tarot deck. She is the ultimate woman, the nurturing and unconditional mother. On a bad day, she can be a tad indulgent and jealous—but ALWAYS endearing, soft, and beautiful. She is the creator of the Tarot deck, the giver of life to all living beings.

“The Empress is the lover, the mother, the child, the creator, the goddess, and the destroyer. She expresses her love and interest through creative means, collaborative arts, and sensual delights.”

“To encompass the Empress’s power see yourself with a positive self image, indulge in your ‘me time’, start a new hobby or form of exercise, dance naked in the Forrest, dive into your creative self, and get your hands into the dirt connecting with the ultimate Mother, our Earth.”

“The Empress corresponds with Venus and carries many of the same associations like love, art, beauty, and pleasure. In readings, I find that the Venusian theme of nurturing (often in the form of self-care) is frequently the key to interpreting the card. The magic of the Empress exists right here in the material world when you tune in to your physical needs (Forget to eat? Have a snack. Feel better), or when you ‘feed your soul’ with art or nature or love.” - Wolf Marnell