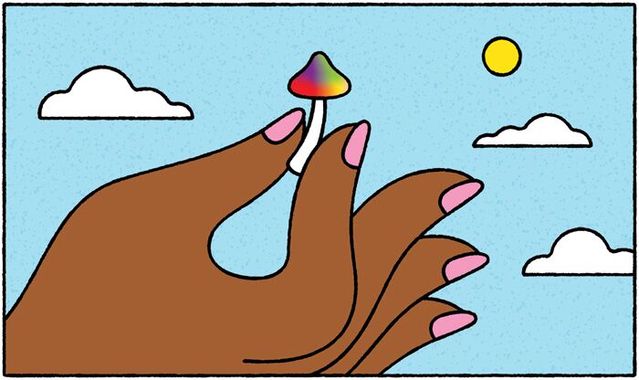 Several years ago, I had a friend who would often eat just a tiny nibble of a psilocybin mushroom if he really had to focus on some academic work. He was a graduate professor of science, incidentally. I’d watch him do award-winning research after he’d dosed, earbuds in, a serene smile on his face. More importantly: he was not tripping at all. He was alert, lucid, and professional. Nobody would have a clue that he’d microdosed.

Microdosing is the act of taking a small amount (1/20 to 1/10 of the traditional dosage for tripping) of a psychedelic, most commonly LSD or mushrooms. And doing so regularly is said to act as a balm for anxiety, depression, and lack of focus. As someone who has taken antidepressants, as well as anti-anxiety and A.D.D. medications in the past, I wanted to try it.

I found a friend with a psychedelics connection (psychedelics are illegal, no matter the dosage or form, so you have to source them as you would any illicit substance—through word of mouth or the dark web). Fifty dollars got me a bougie, adorable little dropper bottle of psilocybin liquid extract.

Though there is little research on microdosing, there are a few widely trusted experts on the subject, including renowned addiction psychiatrist Michael Bogenschutz, who studies the effects of psilocybin at NYU Langone School of Medicine, and psychologist and psychedelics researcher James Fadiman. Fadiman suggests taking your first microdose (in my case, several drops under the tongue), skipping two days, then dosing again, and repeating onward. I decided to take mine every other day instead, and the results were incredible. I didn’t feel high, but did experience increased clarity, empathy, and presence. I didn’t have visual hallucinations, though colors were sharper, as were my problem-solving skills, and I was much more patient in general. I did have small windows of anxiety while microdosing, but those were circumstantial, and I didn’t spiral. Specific behaviors changed, too. Even though I was still going out to bars with friends, I had little interest in alcohol. My whole palate shifted—I began craving an entirely vegan diet, a dramatic life change. I felt more forgiving and considerate, not only toward others, but toward myself. Microdosing helped me examine all the aspects of my self-care (more so, what was lacking) and the authenticity of my spiritual practices. I went back to spending lots of time alone, reading and creating, which is what makes me happiest.

My tiny bottle lasted seven weeks and I have not bought another. This microdosing experience moved my life in such a positive direction, I felt I no longer needed it. I’ve been exercising, eating so well, and taking enough care of my emotional, mental, and spiritual selves with healthy pursuits, that good old endorphins are all I need right now.

6 Feminist Zines That Get Us Pumped To Fight The Patriarchy

Tags: microdosing , mushrooms , magic muchrooms , lsd , psychedelics
Support Feminist Media!
During these troubling political times, independent feminist media is more vital than ever. If our bold, uncensored reporting on women’s issues is important to you, please consider making a donation of $5, $25, $50, or whatever you can afford, to protect and sustain BUST.com.
Thanks so much—we can’t spell BUST without U.