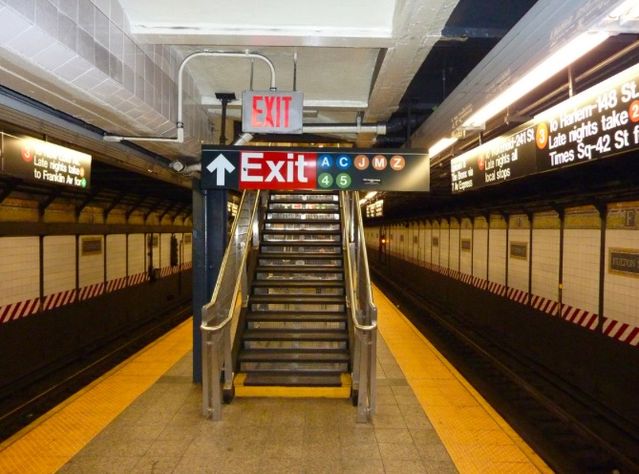 Last night, a 22-year-old mother named Malaysia Goodson died at Manhattan’s Seventh Avenue station, according to The New York Times. Goodson fell down the stairs while carrying her baby daughter in a stroller. The baby was found alive and is now with her father and grandmother, but Goodson was pronounced dead as soon as she was brought, unresponsive, to a nearby hospital.

Goodson’s death could have been prevented, though, if there had been infrastructure in place to support subway users who are unable to easily and safely take the stairs. Currently, only a quarter of New York’s MTA stations have elevators, notes the New York Times, and that’s before we even look at how often these elevators break down (and, though this is less important but should still be fixed, their small sizes and unsavory smells). According to a study by NYU Wagner’s Rudin Center for Transportation Policy and Management, 2015 saw almost 40,000 instances of elevators and escalators going out of service. The Seventh Avenue station is one of around 350 without an elevator at all.

This isn’t a new issue. Last year, Brit McCandless Farmer wrote a piece for CBS News outlining all the minor and major problems that can stack up for the passenger who relies on elevators to make it from platform to platform. Online systems and apps don’t always point out when elevators are out of service, she explained, leaving disabled riders stuck underground, and passengers like Goodson unsafely attempting to take the stairs. “According to the New York City Mayor’s Office for People with Disabilities, there are 928,000 people with disabilities living in the city, including 100,000 wheelchair users,” Farmer says, and “that’s not counting the 60 million tourists who visit every year.”

Accessibility is a problem in other U.S. cities, too, though it’s worse in New York. According to the NYU study, New York’s 25% of stations with elevators (a statistic that hasn’t changed in the past four years) is comparatively lower than accessibility rates in Chicago and Boston (69% of Chicago’s transit stations are wheelchair-accessible, and so are 71% of Boston's transit stations.) These percentages still leave a lot of room for improvement, but New York’s is unacceptable.

One city that seems to have gotten it almost right is Washington, D.C., according to WheelchairTravel.org. The site says that elevators and escalators are present at almost each of the Washington Metro’s 91 stations, but it still isn’t perfect: “Locating an elevator can prove to be more difficult at stations with multiple entrances, as elevators are often only available at one entrance.”

A different, earlier New York Times piece from last summer quoted MTA subway chief Andy Byford’s guarantee that by 2025, there will be enough elevators so that riders won’t have to travel more than two stops for an accessible stations, but many New Yorkers are skeptical: after all, this would mean implementing dozens of elevators to make at least 50 more stops accessible, and there’s nothing that says these elevators won’t break down regularly, just as the ones already in place do.

To those in New York, contact Governor Cuomo and Mayor de Blasio to let them know that MTA accessibility is important to you—and, if you’re able, help someone up or down the stairs if you see them struggling, with a stroller or otherwise.

Riding the NYC Subway while Pregnant

Why We Need To Hold The Door

Tags: public transportation , MTA , accessibility , MTA , accessibility , public transportation
Support Feminist Media!
During these troubling political times, independent feminist media is more vital than ever. If our bold, uncensored reporting on women’s issues is important to you, please consider making a donation of $5, $25, $50, or whatever you can afford, to protect and sustain BUST.com.
Thanks so much—we can’t spell BUST without U.