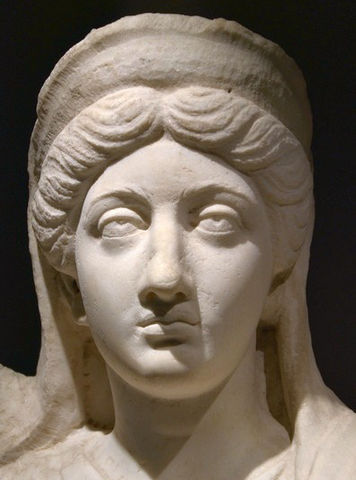 The life of Empress Lucilla is one that can be read a myriad of ways, and history has had a crack at all of them. She’s been a scheming bitch, a jealous scheming bitch, and also an innocent (and occasionally scheming) maternal type. But, as with anything, life isn’t that black and white. In fact, the life of Lucilla is more shades of grey. Was she an innocent? No. Was she a stone cold bitch? No. Was she a schemer extrodinare? Hell yes!

The daughter of acclaimed Emperor Marcus Aerilius, Lucilla was just one in a line of Roman political powerhouses. As such, she was quickly married off. Daddy Emperor picked a suitably auspicious spouse… his co-ruler, Lucius Verus (who, FYI, happened to be twice his young bride's age…).

Go get it, Luci

Going through puberty and finding your place at the helm of a global super power may not seem like a great pairing, but Lucilla blossomed in her new role.

Intelligent and charismatic, she learned on the job. When her husband was away, she’d cover for him, picking up essential skills in diplomacy and negotiations, and generally becoming a political badass in her own right. Soon, Lucilla was one of the Roman Empire's most powerful and influential women.

But then Lucius Verus died and, sans husband, Lucilla was stripped of her role as Empress.

Overnight, all Lucilla’s power and influence turned to dust. The same could not be said for her younger brother, Commodus, who was set to become the first emperor in Roman history chosen for his birthright (as Marcus Aerilius' son) rather than actual aptitude. 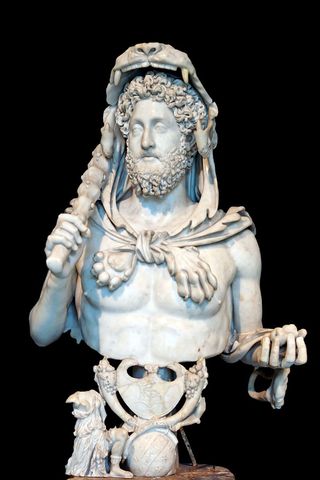 I know what you're thinking, what a totally normal and sane-looking future ruler!

This wasn’t a great plan—you see, Commodus had all the ingredients of a super dick He was handsome (and very aware of it), easily influenced, with a quick temper and a petty bloodlust to rival Joffrey… Actually, thinking about it, in many ways he is proto-, real-world Joffrey!

This fucking prick, though.

Unsurprisingly, megalomaniac dicks without the smarts to back up their ass-hattery do not make great rulers.

"FROM A KINGDOM OF GOLD TO ONE OF IRON AND RUST."

Lucilla was not here for this.

By the time Commodus came into power, Lucilla was remarried to politician Tiberius Claudius Pompeianus Quintianus (who had the world's longest name and was, once more, twice Lucilla’s age).

The marriage to Quintianus gave Lucilla nowhere near the political influence she once had. (Though to be fair, the only way she’d have gotten that back is if she’d married her brother…ick.)

Without power or influence, the only choice Lucilla had was to helplessly watch as her brother slowly but surely fucked up the Roman Empire.

OR she could have her brother murdered… Lucilla went for option 2.

Working with the head of the Praetorian Guard (the Emperor's Guard) and other politicians and family members (including Lucilla's own daughter) who had all had it with Commodus, Lucilla hatched a plan to murder her little brother.

The nephew of Lucilla's husband, also named Quintianus, was hired as the assassin. During a series of games Commodus was holding, Junior Quintianus was to hide in the shadows of the Colloseum. Commodus would walk past unaccompanied, and it would be then that Juinor Quintianus would dispatch him from behind.

Not exactly a groundbreaking assassination plot, but one that would do the job.

"THIS IS WHAT THE SENATE HAS SENT YOU!"

Commodus then tackled Junior Quintianus to the ground and the assassination attempt was foiled.

LIFE LESSON: DO NOT SHOUT YOUR ULTRA SECRET MURDER PLANS AT PEOPLE AS YOU’RE MEANT TO BE QUIETLY SNEAKING UP ON THEM.

Also don't ever hire some guy's cousin (via Giphy)

As she was his sister, Commodus chose not to execute Lucilla. But he couldn’t have her running around Rome anymore, so Lucilla and her daughter were exiled to Capri (a pretty nice exile vacay if you can get it!).

A year later, with Lucilla safely exiled…naturally, Commodus ordered her execution. A soldier was sent to Capri, where both Lucilla and her daughter were quietly murdered.

Commodus was now free to be an ass-hat, which he did to the extent that he is now credited with the downfall of the Roman Empire.

*cue all the sarcastic clapping*

This was really interesting! Where can I find out more? Well, there aren’t really any books on just Lucilla. But while researching this, I found a really interesting book series: A Woman and Her Master by Sydney Morgan. Written in the Victorian era, the books examine the roles of woman from classical civilization and the Bible. A Woman and Her Master: Volume 2 has a cracking chapter that looks at Lucilla, as well as the other woman in Commodus' life.