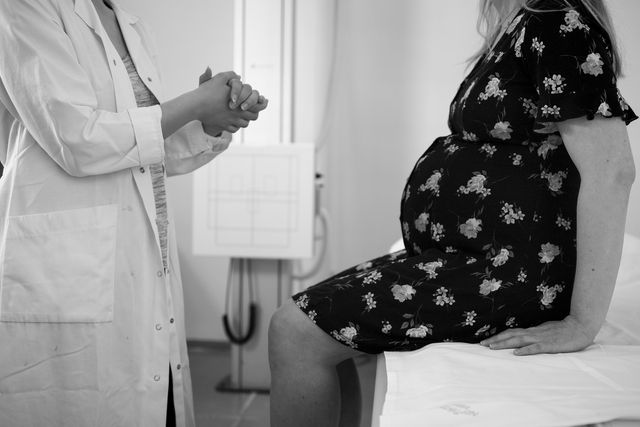 According to the National Organization for Rare Diseases (NORD), morning sickness plagues up to 90% of pregnancies. Nausea and vomiting because of pregnancy are often written off as an expected side effect and have long been thought to be caused by a rise in hormone levels, despite the fact that this hypothesis is not supported by science.

Extreme morning sickness, or Hyperemesis Gravidarum (HG), affects around 2% of pregnancies, according to NORD, but it is the second leading cause of hospitalization during pregnancy. There is no known cause or cure for HG, only ways to manage it—because women’s health issues are often not prioritized and symptoms are dismissed as exaggeration.

Severe morning sickness has recently been in the spotlight because of celebrities like Kate Middleton, Amy Schumer, and Mila Kunis, who all suffered from varying degrees of intense vomiting and nausea during their pregnancies. Kate Middleton suffered from hyperemisis gravidarium during all three pregnancies and it became clear that many people were not aware of how bad morning sickness can be. Her status as the Duchess of Cambridge forced people to take the condition more seriously and not write her condition off as an exaggeration. Schumer has been very vocal on social media about her struggle with HG, posting on Instagram, "I am in the hospital. I’m fine. Baby’s fine but everyone who says the 2nd trimester is better is not telling the full story. I’ve been even more ill this trimester. I have hyperemesis and it blows."

Mila Kunis also suffered from severe morning sickness, though as far as we know, she wasn't diagnosed with HG. She stopped by Jimmy Kimmel in 2014 to give her take on how tough pregnancy can be, saing, “Stop saying, ‘We’re pregnant.’ You’re not pregnant! Do you have to squeeze a watermelon-sized person out of your lady-hole? No. Are you crying alone in your car listening to a stupid Bette Midler song? No. When you wake up and throw up, is it because you’re nurturing a human life? No. It’s because you had too many shots of tequila."

Extreme morning sickness, or HG is clearly not something to ignore. It can result in dehydration, weight loss, kidney failure, malnutrition, and if excessive vomiting persists, esophageal ruptures and retinal detachments have been known to happen. For Middleton, Schumer, and many others, hospitalization and IV fluids or feeding tubes become necessary.

HG not only takes a toll on the mother’s body, it can also lead to miscarriage, premature birth, low weight birth, and neurodevelopmental delay in children. Mothers who have endured HG are three times more likely to have children with developmental deficits, attention disorders, language disorders, and/or language and speech delays. Extreme morning sickness causes nutritional deficiency for both mother and child, and it cannot be written off as a routine part of pregnancy. HG, like many pregnancy-related health issues, should be taken more seriously.

Marlena Fejzo, an associate researcher at the David Geffen School of Medicine at UCLA, is leading important studies on the condition that caused her to lose a pregnancy in 1999. “We finally have some answers as to the cause of this debilitating condition, debunking the theory that it is all in the woman’s head,” Fejzo told UCLA Health earlier this year.

There has been a long history of women's medical issues being written off as "all in the woman's head" and many of these medical conditions are only taken seriously when multiple women continuously speak up about their very real symptoms and pain. The Journal of Law, Medicine, & Ethics published a study in 2001 called "The Girl Who Cried Pain: A Bias Against Women in the Treatment of Pain," which investigated the ways health professionals treated female pain. The study reported that even though females report more severe levels of pain, more frequent pain, and pain that lasts longer than male pain, they are still more likely to be met with "disbelief or other obstacles at their initial encounters with health-care providers." Dr. Tia Powell, a bioethicist corroborated that health care providers may have implicit biases that affect the way women are heard, understood and treated, telling The New York Times in May 2018, "It's a huge issue in medicine. Medical schools and professional guidelines are starting to address this problem, but there’s still much to be done."

A history of disbelief surrounding female symptoms and pain was made worse for morning sickness sufferers when, in the 1950s and 1960s, a thalidomide drug was used to treat morning sickness and it resulted in major birth defects. In August 2018, Fejzo explained to The New York Times that she believes this thalidomide drug disaster made pregnant women wary of trying anti-nausea drugs, and research halted because of the fear. Doctors also became reluctant to prescribe medication that had even the smallest chance of harming a baby's development; as a result, it was easier for doctors to dismiss women and to normalize morning sickness as a routine part of pregnancy.

According to the UCLA Newsroom, in the past year, Fejzo and her team discovered that HG is not caused by the assumed pregnancy hormones, but by genetics. Most recently, the genes GDF15 and IGFBP7 were found to be abnormally high in women with extrreme morning sickness, and these genes have also been linked to cachexia, a chronic nausea and weight-loss condition that debilitates many cancer patients.

Discovering the link between nausea and genetics is an exciting first step in finding a potential cure for morning sickness and other related conditions. Fejzo is hoping to determine whether these GDF15 and IGFBP7 genes can be safely altered in order to minimize vomiting, without disrupting the healthy growth of the placenta, to ultimately improve women’s health during and after pregnancy.

VIVA LA VULVA!: The Ad That Makes You Wish You Could Hug Your Vagina

This Massage Oil Made My Period Cramps Disappear