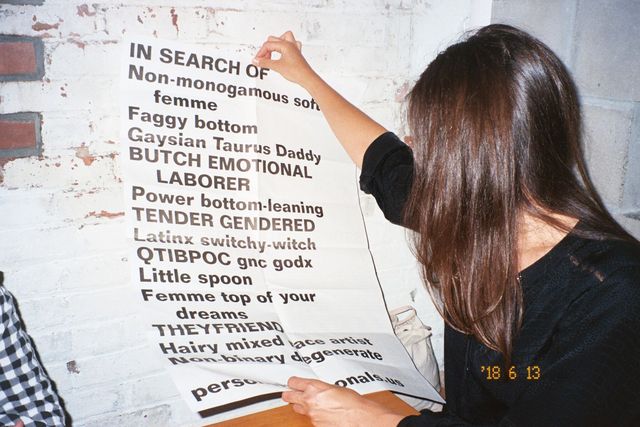 No shade to other dating sites, or people who use them, but it can’t be just me who feels strangely out of place cruising the depths of Tinder for three hours before abruptly deleting it for six months. Honestly, it might just be a compatibility issue. I’m not sure traditional dating apps like Tinder actually have anything I want... some might say we just weren’t meant to be.

When I reflect on my true desires for connection, I find a narrative that is so much more layered, intricate, and nuanced than swiping right. I want community. I want authenticity. I want people I feel seen and safe with. I want friendships. I want glittery and gritty and on the periphery. I want queer visibility at the forefront. I’m not looking for a normative love.

When I discovered PERSONALS (@_personals_), the Instagram page dedicated to connecting queers worldwide through text-based personals ads, I knew this was something different. The Instagram allows queer folks (LGBTQIA, gender non-conforming, non-binary, and dykes/lesbians) to submit short, poetic little excerpts detailing who they are, what they’re looking for, and what they’re about, then links us to their Instagram handle. Unsurprisingly, PERSONALS had a rapid take-off, and has now amassed 50k followers.

I wanted to find out more, so I got on the phone with creator Kelly Rakowski to talk about the origin of the idea, the importance of a dating space for queer folks only, and how we can expect an app in the near future.

The concept for writing personals started while Rakowski was running her other Instagram, @h_e_r_s_t_o_r_y, an archival-based feed posting about lesbian history, from pop culture to high art. Dating apps may be a modern approach to love, but the historical significance of this one goes way back. After uncovering an old lesbian erotica magazine titled On Our Backs, which was published in the 1980s and 1990s, Rakowski took particular interest in the text personals lesbians posted in the back of the spread.

She reflects, "They were sexy and unique. I started thinking, maybe we should start writing our own personal ads. I asked the followers if they’d want to write their own, then I put up a link to a Google Doc form, and people started writing. I made a hashtag #OnOurBacks, so people could honor the origins of the personals, and it kind of took off. I started posting so many personals on @h_e_r_s_t_o_r_y that I had to make a new account."

I ask Rakowski if she was surprised by the response. “I was surprised at first,” she tells me. “I thought only my friends would do it, but people were totally down…it just kind of naturally happened; people knew how to do it, talked to each other, followed each other, and I started getting success stories.”

PERSONALS is unique because it leads with a text-based format as opposed to images. This intuitive understanding that Rakowski talks about regarding how queer folks use language to navigate and build connections with other queer community is something that intrinsically makes sense. It’s also what makes it stand out against other dating platforms.

Rakowski emphasizes the importance of language in the queer community, stating, "It all starts with words, and you don’t see the image first—you’re not swiping. The other thing is, when you sit down to write something, it’s a more intentional action. Everything is more mindful. I was inspired by the original (personals) because people were really being so direct. People were saying 'this is who I am, this is what I’m looking for,' and laying it all out. That person has started the conversation for you...I was attracted to that clarity."

She elaborates, "Most of the dating apps out there… everything is mainly straight, and the queer part is just an afterthought. It’s like it’s a man or woman, it’s a framework that just doesn’t work. I started to realize how important language is to queer people and queer identity, and all the language we use to describe ourselves. The personal ad really helps to highlight that; top, bottom, femme, butch, dyke, non-binary, QTPOC. Ultimately, it’s setting us apart from the rest of what were living in; it helps us define and create our own culture and community, which is really important and makes us stronger together. Plus, it’s fun, playful, entertaining, and sexy."

After the Instagram experienced such significant success, Rakowski decided it was time to take things to the next level: an app. The beginning of the app-building process was kicked off with a party at Honey’s bar in Brooklyn, New York, and followed by an even crazier party (I went to the first party at Honey’s—it was a wild manifestation of the internet into real life). A Kickstarter was also launched, which so far has raised close to $48,000. Rakowski says the app will be a little different, making up for some of the shortcomings of the Instagram platform. Namely, the app will offer the ability to sort by location, as well as the option to post whenever you want to. “Basically, it’ll be like Instagram, but better,” Rakowski tells me. “I also just want us to be our own totally separate thing.” 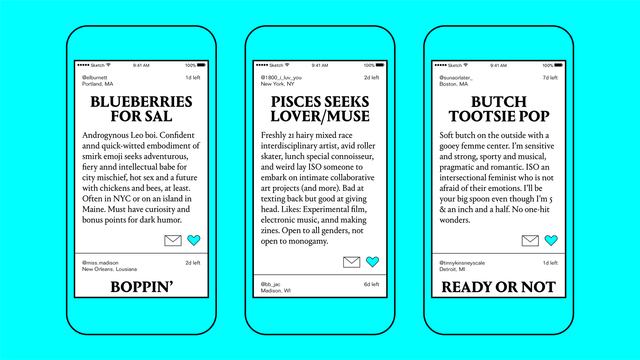 Obviously, PERSONALS is something the community needed and was missing. Some people ask why queer folks need their own exclusive dating app when there’s plenty of others available to use. Unfortunately, for many folks in the queer community, these apps aren’t the safest spaces to connect; you can practically anticipate having to wade through your fair share of homophobia, transphobia, gender essentialism, and so on, not to mention all the straight couples constantly asking you to be their third (if you know, you know). Moving through the world with an identity or body that’s already marginalized compounds the exhaustion of having to filter through that twofold, especially when you’re just tryna’ get it on with someone cute or find a date.

Instagram creates a safety network by showing you who someone is friends with (if you’re not, someone else in your queer network probably is—the queer network always provides). Also, people are just genuinely nice and sweet, championing one another for showing up and engaging with each other with real warmth and kindness.

I asked Rakowski if she’s has any favorite stories from running PERSONALS so far. "I think my favorite couple, one lived in Pennsylvania, and the other lived in Connecticut," she says. "They met on PERSONALS, and they started driving back and forth to hang out with each other and started making art videos. They sent me one, and they said ‘this is the G-rated version’ but it was totally just a video of them fucking. It was really amazing, though. One was topless chopping wood, and they were laying on a blanket making out… They ended up moving in together, they moved to Western Mass.”

She then goes on to tell me “There’s also a group of people in London that have all met through writing personals, and they meet up to watch The Great British Baking Show.” On that note, I’d just like to it put out there: why is the queer Great British Baking Show hangout not happening in New York yet? And if it already is, I'm waiting on that invite.

Rakowski says you can get involved by following @h_e_r_s_t_o_r_y and @_personals_ on Instagram. Once a month (generally mid-month), PERSONALS opens submissions, for 48 hours (this is because people submit so many). Look out for the submission period, and if you want, you can pay $5 to ensure that your personal gets posted. All money raised helps go to running the Instagram, and the creation of the app, which is currently being developed. Additionally, other folks who enjoy or benefit from PERSONALS who want to donate but don’t want to post are invited and encouraged to. Everything helps in bringing this beautiful queer dream creation into fruition.

all photos courtesy of Kelly Rakowski

Tags: Kelly Rakowski , PERSONALS , herstory , On Our Backs , App , Dating , Queer , LGBTQ , Lesbian
Support Feminist Media!
During these troubling political times, independent feminist media is more vital than ever. If our bold, uncensored reporting on women’s issues is important to you, please consider making a donation of $5, $25, $50, or whatever you can afford, to protect and sustain BUST.com.
Thanks so much—we can’t spell BUST without U.