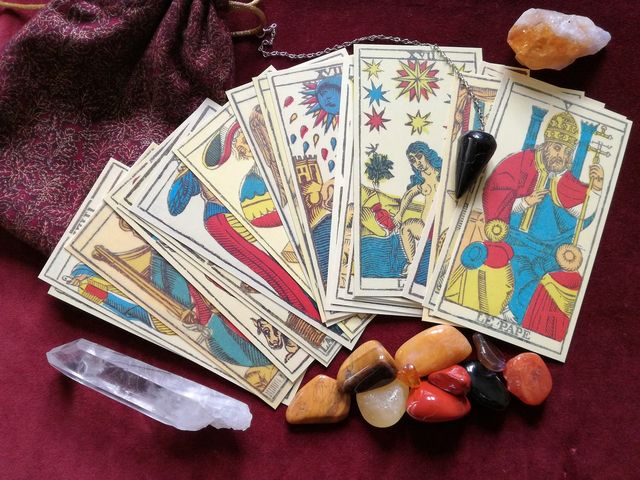 Tarot is a form of divination that helps guide seekers on an inward journey, leading to a complete understanding of current situations. The Tarot deck consists of 78 cards (22 Major Arcana cards, which show us important themes in the reading, and 56 Minor Arcana cards, or Suits, which explain the core details of the matters). Used for centuries, Tarot can provide insight into matters that other forms of divination cannot, therefore, it is known as one of the most insightful and beautiful connections to the spiritual world. There is a lot of information on Tarot sweeping the internet, and most not accurate—which is why we asked Tarot readers to explain the Tarot, in their own words and share spreads to practice.

First, we'll discuss the symbolism of the different cards. Then, we'll go through how to ask the Tarot a question. Next, we'll walk you through a few Tarot spreads to try. And finally, we'll discuss how to care for your Tarot cards. 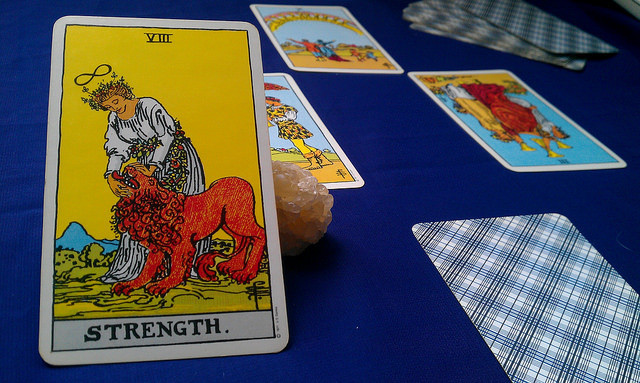 "Strength" is the eighth card in the Major Arcana; via NumerologySign.com/Flickr Creative Commons
The Major Arcana cards represent archetypal themes that will occur to you throughout your life. As you progress through numbers 0 to 21, you follow The Fool on their journey through the Sephiroth on the Tree of Life. Each step represents an important part of human development. 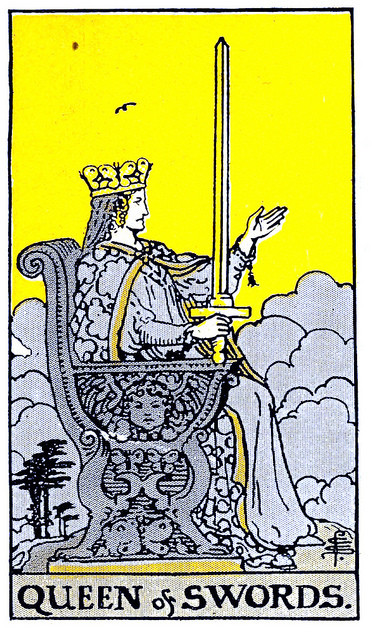 the Queen of Swords is one of the 16 Court Cards; via CircaSassy/Flickr Creative Commons
Each of the four Suits—Pentacles, Wands, Cups, and Swords (more on those soon)—has four Court Cards: King, Queen, Knight, and Page, for a total of 16 Court Cards. Each of the 16 Court Cards is linked to various personality traits and levels of maturity or stages of life. By becoming familiar with the characteristics linked to each card, you can more easily pinpoint who the card represents in a reading. I also find that Court Cards are genderless. Queens can represent men, Kings can be women. It's all very fluid. Tap into your intuition, and you will know who the card is referencing. A Page typically represents someone younger, but he can also represent someone who is in the early stages of something or someone who is acting immaturely. When I am doing a reading to explore a client's love life, sometimes the Page of Cups appears, and that could be a young, creative person, like an artist or musician. 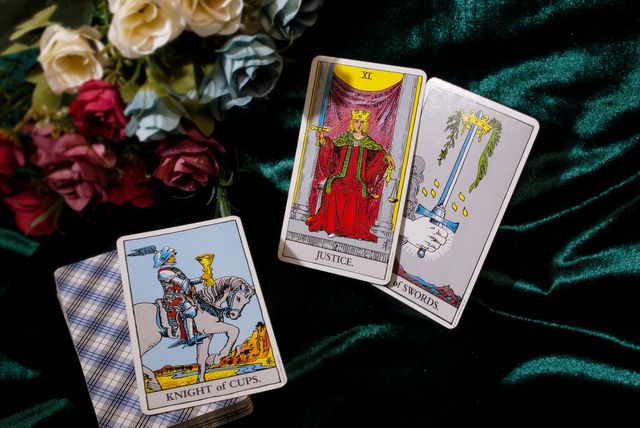 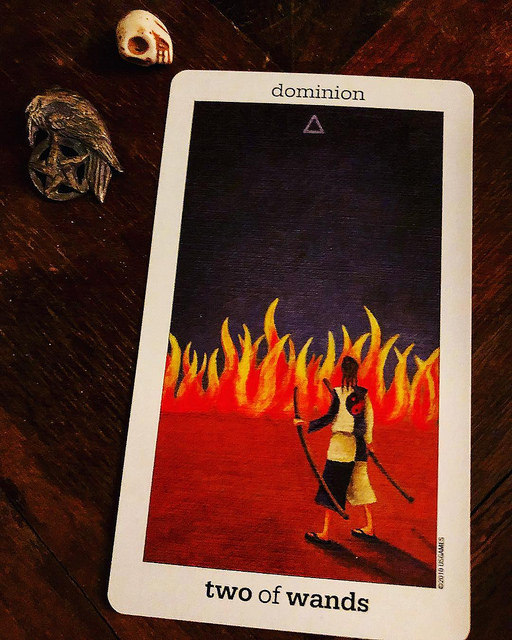 the Two of Wands; via eddiecoyote/Flickr Creative Commons
Wands represent the elusive spark of creation in all its expressions. The Suit of Wands often references life and birth, inspiration, potency, artistic journeys, exploration, and intrepid partnership. If you consider the Suits ordered in this way, we can also see Wands as the fuel for all of life's experiences. Inspired action comes before reflection. We must experience an impulse before we can decide what to think about it (Swords), how to feel about it (Cups), or how to utilize it (Pentacles). In this way, Wands suggests a connection to "source," or one's muse or the subconscious mind. 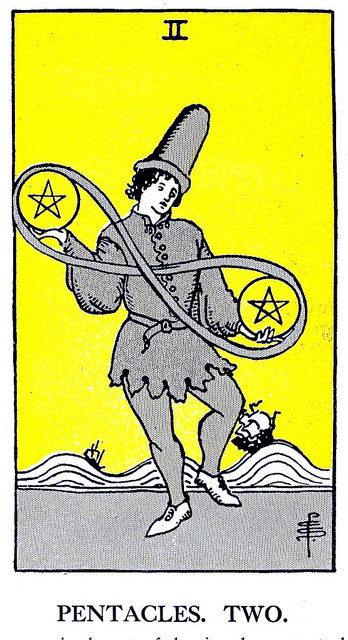 the Two of Pentacles, via CircaSassy/Flickr Creative Commons
The Disks/Pentacles represent how our mind/body/spirit aligns on earth. It’s easy to chalk Pentacles up to money, home, and our bills, but they’re more interesting than that. They encompass how we move and operate on earth, so purpose, pleasure AND how we pay the bills are in that. 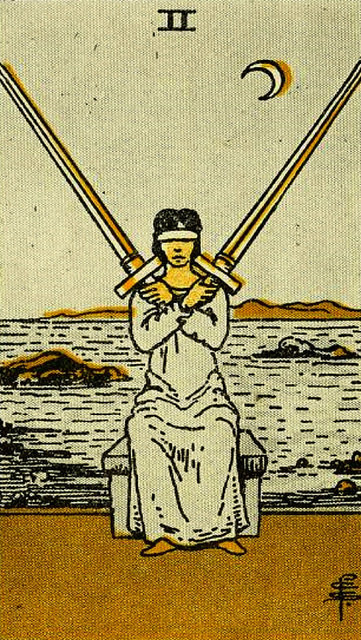 Two of Swords, via Midnight Believer/Flickr Creative Commons
The Element of Air corresponds to the suit of Swords in the Tarot, representing our mental world. Swords represents our ideas, belief systems, ethics, communication, lofty intellectual pursuits, and sense of right and wrong. The Suit of Swords is like the weapon itself: capable of cutting out the bullshit, but also very painful. In a way, it can be the most challenging, yet rewarding Suit to work with. 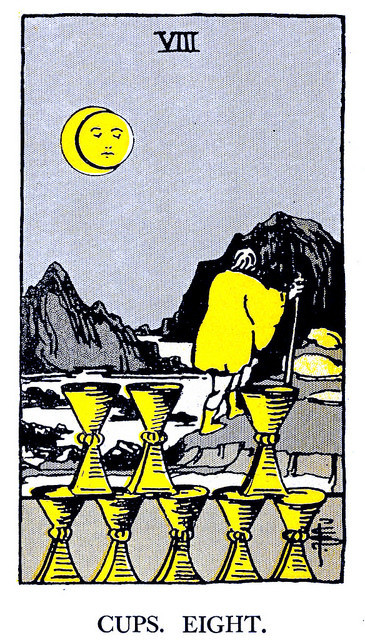 Eight of Cups, via CircaSassy/Flickr Creative Commons
The Cups symbolize emotions and love in the Tarot, and folks that sit down to get a reading are often delighted to see one of these cards in a spread! If you're wondering whether you sweetheart feels the same way as you do, or if your honey will stick around for a while, or if that cute person of interest at the gym notices you working your body on the treadmill, look to this charming Tarot spread to give you the insights you need around your love life.

There are no answers without questions. Around the world and throughout time, the question has been and continues to be of paramount importance when it comes to divination. The ancient Greeks would never consider approaching an oracle without a question, and neither should modern querents. The right question provides the context necessary for a diviner or fortune teller to give the most sharp, articulate, and accurate of answers. Inquiries put to the oracle should provide details about the situation while avoiding value judgments, implicit assumptions, or meandering secondary questions. My favorite kind of inquiries involve personal agency rather than mere prediction, and allow the querent to strategize how to act based on the information received. That way you have something to take home with you and act upon instead of a deterministic prediction that leaves you with nothing to do but wait and see.

Questions should be open ended to get the most out of your reading. For example, instead of asking “Are they interested in me?” the question can be rephrased as “How do they feel about me?” This way, the cards are able to construct a narrative to be interpreted by both the reader and seeker, instead of simply being a yes/no sounding board. Sometimes the cards will get annoyed by simple yes or no questions, because they realize that the seeker should be focusing on something else rather than the question at hand. Before asking questions, the seeker should contemplate on whether or not the question is being asked as a distraction from the challenges they need to be facing. 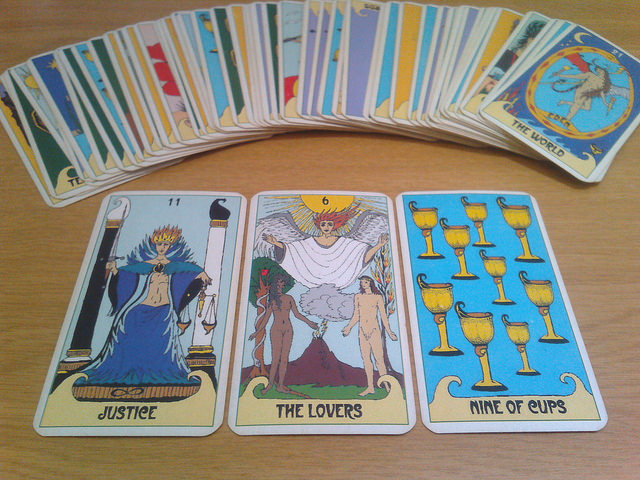 A three-card Tarot spread, via Atell Rohlandt/Flickr Creative Commons
Now that you know how to formulate a correct Tarot question and you are familiar with the cards, it’s time to start practicing your skills. Below are three spreads created by three Tarot readers to help you with work, financial, and romantic matters.

This is a circular/diamond shaped spread my teacher and friend Jeff Hinshaw created, inspired by the Wheel of Fortune card. It’s pretty perfect for work scenarios because it looks at where you are, versus where you might like to be. There are infinite variations of what this (or any spread) can look like, so don’t be afraid to make them your own! Start with three-card spreads (past, present, future; strengths, weaknesses, advice, etc.) and work up to larger ones.

The first card reveals your current financial situation. The second card reveals your relationship with money and abundance. (Sometimes I think people don’t realize that they are the ones not open to receiving money energy, We have to shift our own perspectives on money to properly engage with it and accept it. So many people think they don’t deserve money for what they do, and this hinders their ability to demand their worth.) The third card reveals any blocks that are in your way of receiving money, and a new perspective on what is holding you back financially. The fourth card is the key to the solution to invite in abundance. What steps do you need to take to bring in more money, or what work do you need to do (physically, emotionally, spiritually)? And remember to invite in the power of GREEN!! Wear it, eat it, bring plants into your home!

Place cards in the format below:

Shuffle the deck. Turn over and discard the cards one-by-one from the top of the deck until you reach your first card in the Suit of Wands. Place that card in the center as card #1. Continue with the unturned cards from the deck, and place the next four cards in the indicated X pattern.

Card #1 describes the essence of your relationship as it currently stands.

Card #2 describes the observable genesis of your relationship, the conscious inspiration that drew you together, or how you rationalized your ineffable spark.

Card #3 describes the unseen currents, the subconscious roots that form the foundation for connection.

Card #4 describes the greatest potential for your relationship.

Card #5 offers a warning on the pitfalls, of how the relationship could get off track.

How to Care for Your Tarot Cards 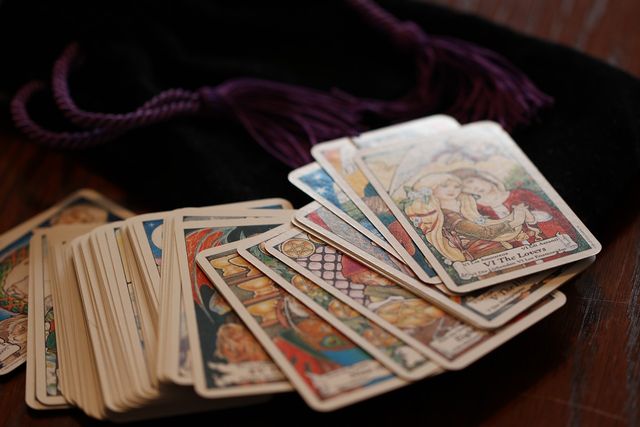 It’s important to treat your cards with respect. Tarot enthusiast Sophie Saint Thomas (@thebowiecat) reminds us that Tarot Cards are “sacred.” She keeps her cards in “a wooden box for a deck that's extra special to me...Use them, and be okay that with that may come signs of wear, but the one thing you don't want is any stains or markings that make a card obvious and reveal itself before it's pulled, so be careful to keep them away from food and beverages and treat them with the respect they deserve.” You can also cleanse and charge your cards with crystals such as clear quartz between readings to clean the energy.

Tags: Tarot , Tarot cards , how to read tarot cards
Support Feminist Media!
During these troubling political times, independent feminist media is more vital than ever. If our bold, uncensored reporting on women’s issues is important to you, please consider making a donation of $5, $25, $50, or whatever you can afford, to protect and sustain BUST.com.
Thanks so much—we can’t spell BUST without U.