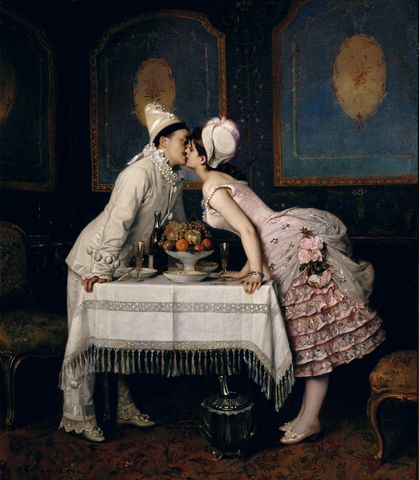 During the Victorian era, fancy dress balls were one of the grandest and most fashionable ways for a society hostess to make her mark. These magnificent, costumed affairs were widely reported in 19th century newspapers, with a great deal of attention paid to who was wearing what. Guests dressed up as historical figures such as Marie Antoinette or Napoleon. They also wore more creative costumes—many of which were recommended in fancy dress advice manuals and costume books. In today’s article, we look at a few of these costumes and at some of the more famous Victorian fancy dress balls held at Brighton Pavilion, Warwick Castle, and Devonshire House.

In Brighton, the final week of the season was marked with a fancy dress ball held at the Pavilion. An article in the 1868 edition of the Kentish Gazette calls it a “gorgeous spectacle.” The belle of the ball was a woman dressed as “Starlight.” The article describes her costumes as: “…a black tulle dress, gold starred, a necklace of star-set pearls, a coronet of the same gems, flowing hair, and black gloves.”

In addition to Starlight, the Brighton fancy dress ball of 1868 featured several “Watteau Shepherdesses,” many ladies in “Hungarian” costume, and a woman dressed as Titania from Shakespeare’s A Midsummer Night’s Dream. Of the more creative costumes, the Kentish Gazette reports two women dressed as “Winter” in gowns of “swan’s down flakes.” There was even a woman dressed as a telegraph—though her costume is not described. 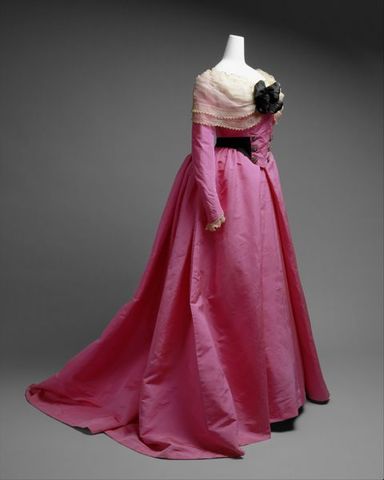 The men at the Brighton fancy dress ball wore, primarily, military uniforms. Among these, the Kentish Gazette states that “the Charleses and the Cavaliers” were well represented. In addition, several men came dressed as Mephistopheles and one came in the guise of a “Bedouin sheyk.” There were also assorted Zouaves, Highlanders, and even “a sprightly silken-clad Jester.”

By the 1880s the popularity of the fancy dress ball in Brighton was fading. At the close of the season in 1882 very few of the guests even bothered to come in costume, leading an 1882 edition of Truth to declare, “…it becomes more apparent each season, here and everywhere else, that unless ordinary costumes are positively interdicted, it is no use to attempt fancy dress balls.” 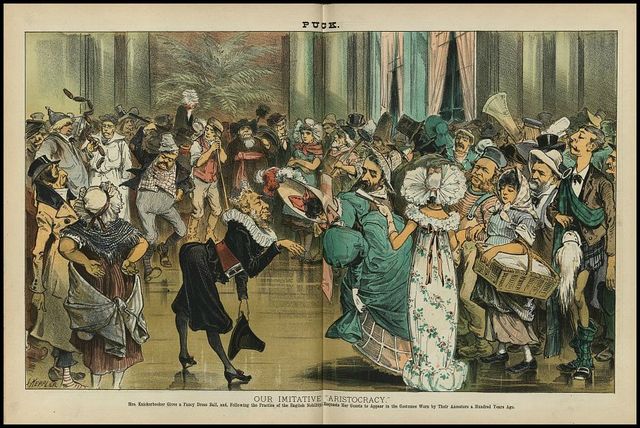 Our Imitative Aristocracy by Joseph Keppler, Puck, 1883. (“Mrs. Knickerbocker Gives a Fancy Dress Ball, and, Following the Practice of the English Nobility Requests Her Guests to Appear in the Costumes Worn by Their Ancestors a Hundred Years Ago.”)

This may have been true for a short while, however, by the 1890s fancy dress balls were once again wildly popular. As author Herbert Norris explains in his 1933 book On Nineteenth-Century Costume and Fashion:

“Towards the end of the century there was a remarkable revival of interest in fancy dress balls. These picturesque functions were organized by the foremost hostesses of the nineties on an unprecedented scale of magnificence, and were attended by all the aristocracy.”

Of these, one of the most notable was the fancy dress ball given by Frances “Daisy” Grenville, Countess of Warwick, at Warwick Castle in 1895. This fancy dress ball featured costumes inspired by the reigns of Louis XV and XVI and, as Norris relates, “The Countess herself appeared as Marie Antoinette in a dress of rose and gold with sky-blue velvet train powdered with gold fleurs-de-lis…” 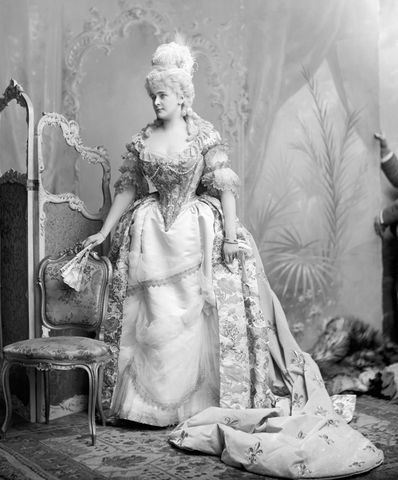 Countess of Warwick as Marie Antoinette at the Devonshire House Ball in 1897. (Photo by James Lafayette)

The Countess of Warwick would wear this same costume two years later at what was, perhaps, the most famous fancy dress ball of the Victorian era—the 1897 fancy dress ball at Devonshire House. The Devonshire House ball was held to celebrate Queen Victoria’s Diamond Jubilee. An 1897 edition of The Lady’s Realm calls it one of the “great fancy-dress balls” of the age. The Duchess of Devonshire herself dressed as Queen Elizabeth and, as for her illustrious guests, The Lady’s Realm reports:

“Lady de Grey was superb in an Eastern costume, Lady Warwick lovely as Marie Antoinette. Lady Dudley went as a Roman empress, and her beautiful jewels reset as a broad coronal across her brow. The Duchess of Sutherland, as Charlotte Corday, wore a comparatively simple costume, but none looked fairer than she, the simplicity of her dress only enhancing her grace and charm.” 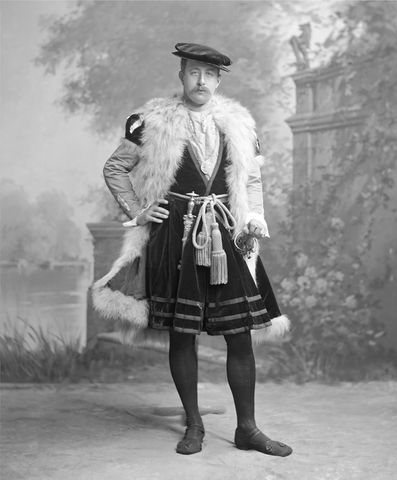 Duke of Devonshire as an Ambassador from a Holbein Painting at the Devonshire House Ball, 1897. (Photo by James Lafayette)

When it came to costumes for a Victorian fancy dress ball, the only limit was one’s budget and creativity—and, of course, the dictates of one’s host. Fancy dress balls where the guests were asked to appear in costumes worn by their ancestors or in costumes relating to a particular theme were very popular. Many of these themes wouldn't be acceptable today. The below photograph shows an Asian-themed fancy dress ball from 1886. 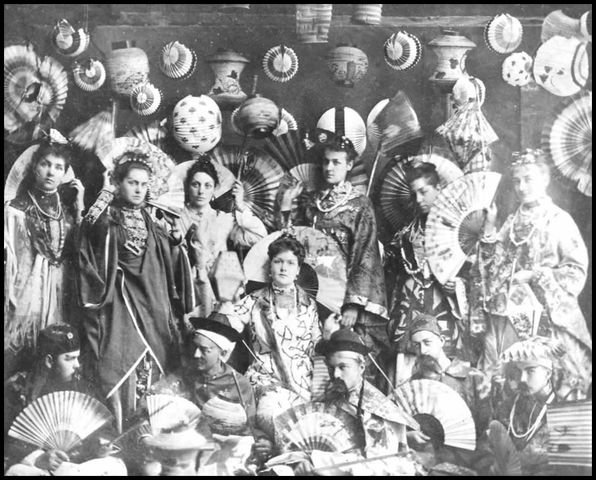 Photo of a Fancy Dress Ball in Coburg, Ontario by Harry Irwin, 1886.

Dressing up as an actual character from history—such as Louis XV, Queen Elizabeth I, or Charlotte Corday—was especially en vogue. As was dressing in a more generic historical fashion, such as costumes depicting a Roman woman or an “Eastern” woman in harem pants. The Turkish-style fancy dress costume shown below is a perfect example of this. Designed by the House of Worth in 1870, it is made of silk with an embroidered bodice. 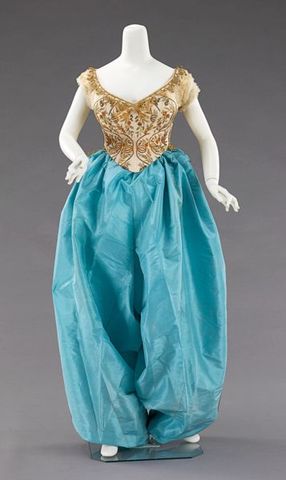 As you may have noted from the descriptions of costumes at the Brighton fancy dress ball, not all costumes were as decadent as those worn by the Countess of Warwick. In addition to dressing as seasons such as winter, spring, and autumn, ladies expressed their creativity by dressing as fairies, comets, and butterflies. Some women attending fancy dress balls in the late 19th century even chose to come dressed as “Night.” Obviously, the interpretation of what “Night” looks like may vary, but in her 1881 book Characters Suitable for Fancy Costume Balls, Mme. Marie Schild gives two possible costumes. 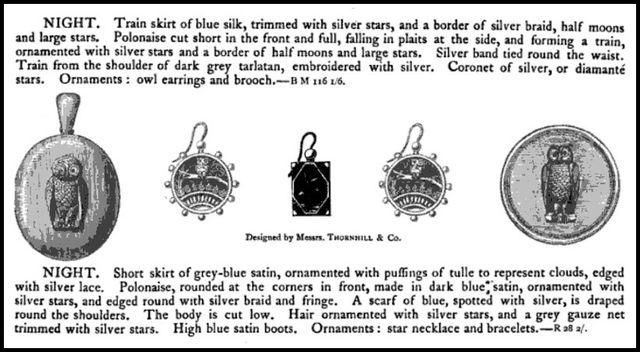 Similarly, in his 1880 book Fancy Dresses Described, author Ardern Holt includes a lady’s costume for “Night.” He also suggests materials for costumes that are still popular today, including such Halloween favorites as witches and cats. 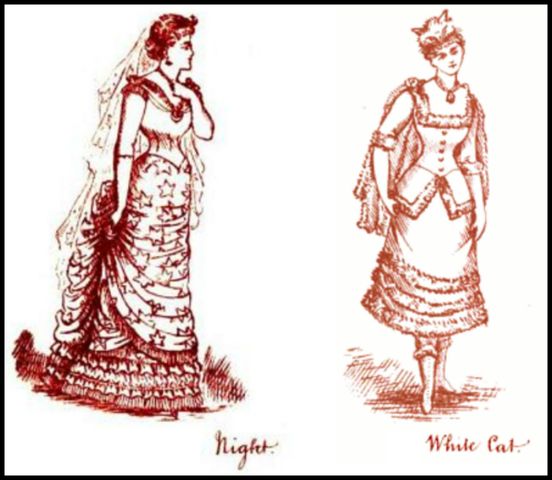 Some of the costume ideas in Victorian era fancy dress books are quite whimsical. For example, Mme. Schild suggests a costume for a lady wishing to attend a fancy dress ball as an “Aquarium.” I found this particularly amusing in light of my recent article on the popularity of goldfish globes in the Victorian era (article HERE). 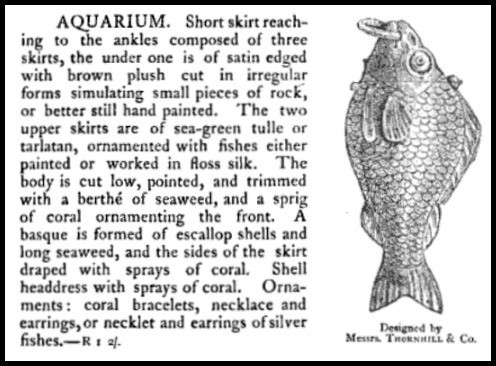 Men’s costumes could be just as creative—and as low budget. In his 1884 book, Male Character Costumes for Fancy Dress Balls and Private Theatricals, author Samuel Miller provides costume ideas for pirates, pioneers, and smugglers, as well as costumes for historical and literary figures such as Robin Hood, Robespierre, and the Three Musketeers. My favorite suggestion of all, however, is for a “Champagne Bottle.” Miller describes the costume as follows:

“CHAMPAGNE BOTTLE. Make a cap to simulate the cork of a champagne bottle, tied across to represent the wiring, and covered with gold foil; the nape of the neck should also be covered with gold foil, which can be done by lengthening the back piece of the cap and joining it to the robe. Wear a close-fitting black robe with the label of any champagne brand worked on the back and front.” 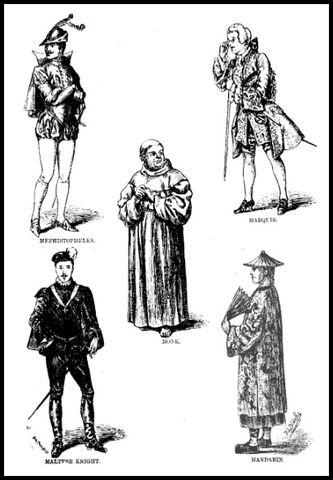 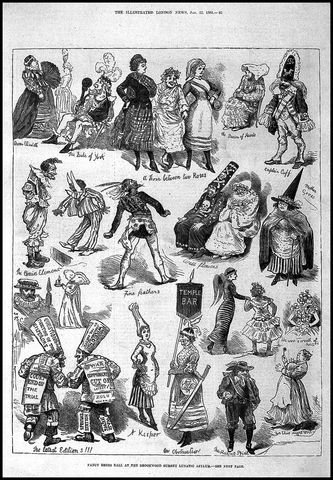 Clothed in fancy dress, a Victoria era party guest could pretend to be someone else. Costumes—especially those with masks—allowed their wearers to engage in flirtation, intrigue, and other brazen and risqué behaviors, the likes of which were generally frowned upon in polite society. With that in mind, it is easy to understand why so many in the Victorian era enjoyed attending a fancy dress ball—and why fancy dress balls continued to be popular well into the 20th century.