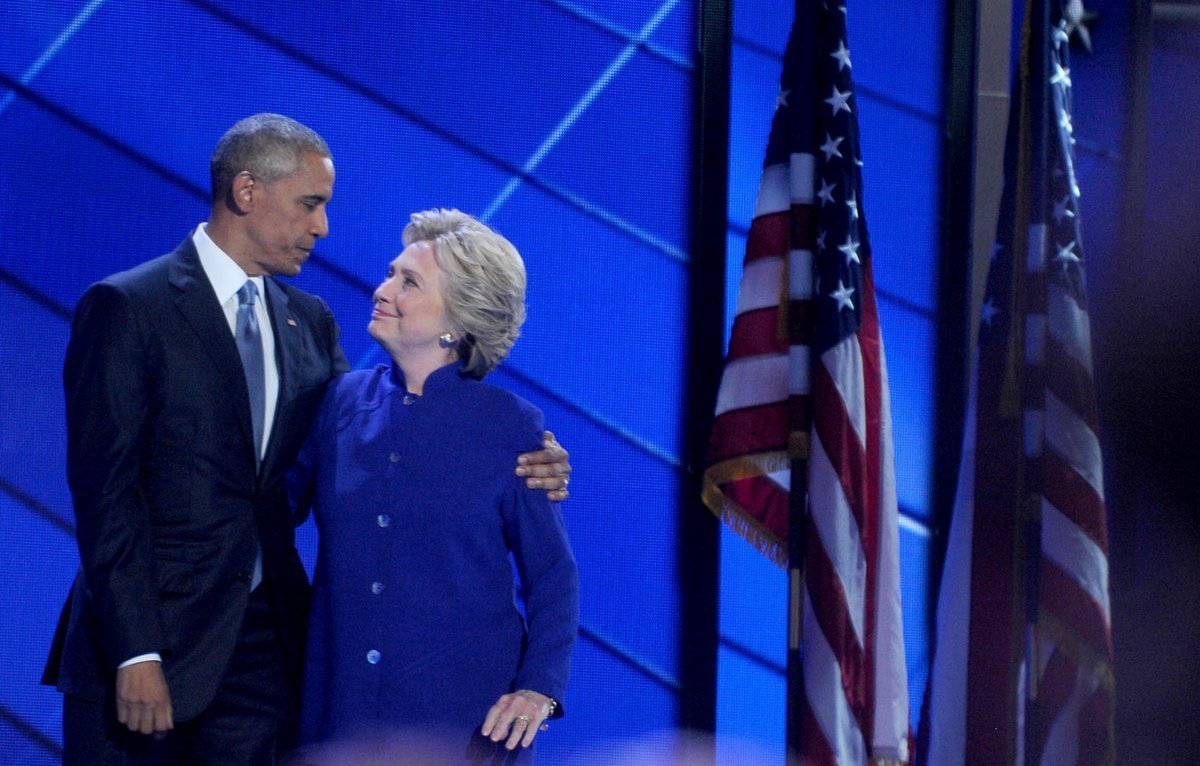 As we draw closer to the midterm elections, Hillary Clinton and Barack Obama are pushing for all Americans to seriously consider our country's future. As the current administration deteriorates into more of a moral clusterfuck than anyone could have predicted, it’s becoming more difficult to keep track of core issues between all the information and Twitter distractions. As Clinton puts it in an op-ed, published on Sunday in The Atlantic, “I think that may be the point—to confound us, so it’s harder to keep our eye on the ball. The ball of course being American Democracy.”

During a speech on September 7th at the University of Illinois, Obama attempted to separate Trump from the biases between Democrats and Republicans, Vox reports. Obama asserted that non-Democrats should reject the current brand of Republicanism in the United States, saying, “It shouldn’t be Democratic or Republican to say that we don’t threaten the freedom of the press because they say things or publish stories we don’t like…It shouldn’t be Democratic or Republican to say we don’t target certain groups of people based on what they look like or how they pray.”

In her essay, Clinton echoes these sentiments, saying, “When you start seeing politics as a zero-sum game and view members of the other party as traitors, criminals, or otherwise illegitimate, then the normal give and take of politics turns into a blood sport.” While Clinton is quick to mention that the hyperpolarization of politics is “not a symmetrical problem” and faults “the increasing radicalism and irresponsibility of the Republican Party,” she and Obama believe the Trump administration’s policies go beyond party affiliation and call into question basic human rights.

Clinton outlines five areas where Trump’s corrupt administration proves detrimental to the future of the presidency and democracy at large. The first is his “assault on the rule of law.” It’s no secret that Donald Trump has always considered himself to be above the law. Even before announcing his campaign for presidency, Trump’s crooked moral compass is well documented in the business world between his tax loopholes and bankruptcies. He lied, cheated, bullied, took advantage of people, and disguised his conduct as shrewd deal making. He told The New York Times, “I have an absolute right to do what I want to with the Justice Department.” His lawyers agree, of course.

The New York Times also reports that Trump told White House aides that regardless of the law, he expected Attorney General Jeff Sessions to protect him. He also pressured the Justice Department to go after his political opponents. In Trump’s mind, unceasing loyalty to him is more important than adherence to the constitution. This is fundamentally un-American and a radical departure from the Founders’ definition of a Republic where no one is above the law.

Clinton raises further concerns about “the legitimacy of our elections,” calling out voter suppression, partisan manipulation and Trump’s blatant resistance to stop Russia’s interference. Which brings us to Trump’s acute hostility toward journalists and the media. According to fact-checkers at The Washington Post, Trump has made 5,000 false or misleading claims while in office averaging at 32 a day. When asked by 60 Minutes reporter Lesley Stahl why he’s always attacking the press, he said, “I do it to discredit you all and demean you all, so when you write negative stories about me, no one will believe you.”

And let’s not forget the many conflicts of interests, abuses of power and violations of ethics rules in this administration! Trump is profiting off of the presidency, point blank. Industry lobbyists, foreign governments and Republican organizations do business with Trump’s companies and hold events at his properties. Where do you think that money’s going?

In her last point, Clinton says that there’s “a racial subtext” to everything Trump says. I’m going to take it a step further and say Trump is without a doubt, racist. He says Haitian and African immigrants are from “shithole countries.” He ignores the suffering of Puerto Ricans, even refusing to believe that Hurricaine Maria caused nearly 3,000 deaths. He said an American judge couldn’t be trusted because of his Mexican heritage. He failed to condemn hate crimes against Muslims. He lashes out at NFL players protesting against systemic racism. He referred to white nationalists in Charlottesville, Virginia as "very fine people" an attitude Obama referenced this in his speech, asserting, "We’re supposed to stand up to discrimination, and we’re sure as heck supposed to stand up clearly and unequivocally to Nazi sympathizers. How hard can that be? Saying that Nazis are bad." For her part, Clinton writes, "Hate speech isn’t 'telling it like it is.' It’s just hate."

In one of the more disturbing violations from this administration, Immigrations and Customs Enforcement is, as Clinton says, "running wild accross the country." They're terrorizing communities, with federal agents forcefully separating children from their parents and even confronting citizens for speaking Spanish. Despite court orders and public outcry, 12,800 children are still being detained, according to The New York Times, the highest number of detained children yet. Under Trump, nearly every federal agency has scaled back enforcement of civil rights protections. These facts and instances send a clear message that Trump's adminisration believes that not all Americans are created equal and therefore don’t deserve the same rights as others.

So what can we do? Clinton believes reforms will need to be made in response to Trump’s abuses of power. For one, presidents should be required by law to release their tax returns and not be exempt from ethics requirements and conflict-of-interest rules, and elections must be improved and protected. But she says, first and foremost, we need to “mobilize massive turnout in the 2018 midterms.” So now is the time to register and vote, because “Democracy may be our birthright as Americans, but it’s not something we can ever take for granted.”

President Trump Can Stop Pretending To Care About Puerto Ricans

Tags: Democracy , Hillary Clinton , Barack Obama , Trump , Human Rights , Politics , America , Donald Trump , Hillary Clinton , Barack Obama
Support Feminist Media!
During these troubling political times, independent feminist media is more vital than ever. If our bold, uncensored reporting on women’s issues is important to you, please consider making a donation of $5, $25, $50, or whatever you can afford, to protect and sustain BUST.com.
Thanks so much—we can’t spell BUST without U.