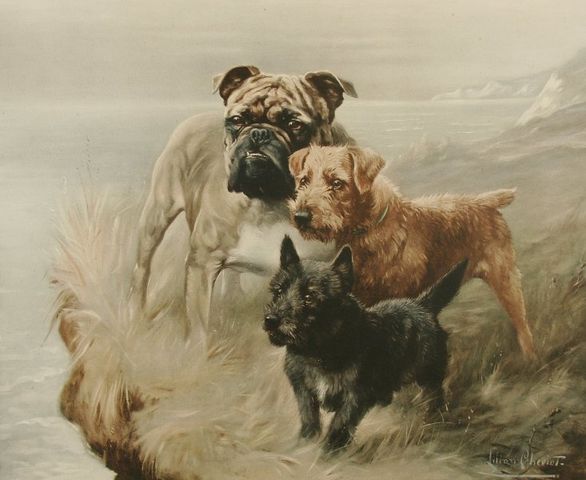 Here, I bring you three separate, but equally intriguing, dog anecdotes from the 19th century. The first involves a Scottish Terrier and a lady’s white petticoat. The second involves a Bulldog and a surgeon. And the third and final tale gives us a little insight into the professional and working class souls of 19th century canines.

The Scottish Terrier and the Petticoat

Mr. Liang, who was steward to General Sharp of Houston, near Uphall in Scotland, had a terrier dog. This particular little dog was well known for his sharp intelligence. One day, Mr. Liang’s wife lent a white petticoat to a neighbor lady in which to attend a christening. The terrier observed Mrs. Liang make the loan. When the neighbor lady left the Liang’s house, the terrier followed her home. According to the story, “He never quitted her, but accompanied her to the christening, and leaped several times on her knee: nor did he lose sight of her till the piece of dress was at last fairly restored to Mrs. Laing.”

The neighbor lady knew very well what the little dog’s purpose was in following her and watching her so closely. In fact, "During the time [she] was at the christening, she was much afraid the dog would attempt to tear the petticoat off her.”

The above tale is related in many books, newspapers, and magazines published during the Regency and Victorian era. In each publication, the facts are essentially the same, however in none of them is there any reference to the date on which this incident actually occurred.

The Bulldog and the Surgeon

In mid-19th century Pennsylvania, a tavern keeper by the name of Mr. Cosgrove had his arm broken. His injury was treated at the offices of one Dr. Atlee. After the initial visit, Cosgrove returned to Dr. Atlee’s offices on many subsequent occasions to have his injury checked and his bandages changed. On each visit, Cosgrove was accompanied by a “large, most ferocious-looking bulldog.”

This bulldog watched Dr. Atlee with great attention as the doctor bandaged his master’s arm. As Dr. Atlee reports in The Philadelphia Medical Times (excerpted in The London Medical Record):

“A few weeks after Cosgrove’s case was discharged, I heard a noise at the office door, as if some animal was pawing it, and on opening it, saw there this huge bull dog, accompanied by another dog that held up one of its front legs, evidently broken. They entered the office. I cut several pieces of wood, and fastened them firmly to the leg with adhesive plaster, after straightening the limb. They left immediately. The dog that came with Cosgrove’s dog I never saw before nor since.” 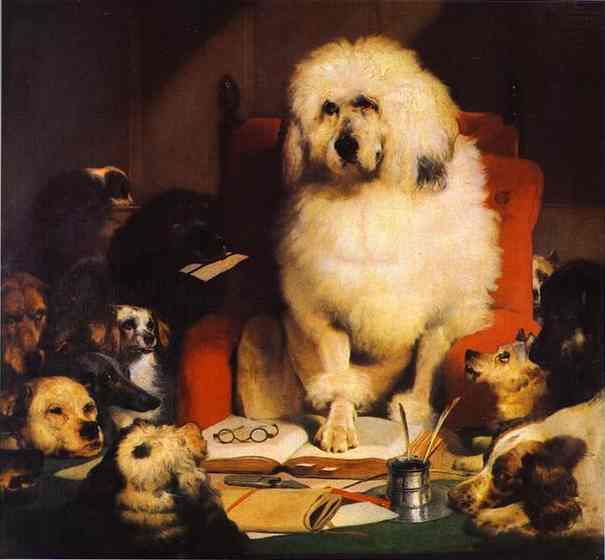 The Professional Souls of Dogs

In Edward Jesse’s 1858 book Anecdotes of Dogs, he imagines that different dog breeds are inhabited by the souls of deceased members of various professions and trades. A strange proposition – and a bit offensive to those of us in the professions – but entertaining nonetheless. He writes:

“The souls of deceased bailiffs and common constables are in the bodies of setting dogs and pointers; the terriers are inhabited by trading justices; the bloodhounds were formerly a set of informers, thief-takers, and false evidences; the spaniels were heretofore courtiers, hangers-on of administrations, and hack journal-writers, all of whom preserve their primitive qualities of fawning on their feeders, licking their hands, and snarling and snapping at all who offer to offend their master.”

He goes on to address the souls of gamblers, butchers, country squires, and the beaux and macaronis at court:

“A former train of gamblers and black-legs are now embodied in that species of dog called lurchers; bull-dogs and mastiffs were once butchers and drovers; greyhounds and hounds owe their animation to country squires and foxhunters; little whiffling, useless lap-dogs, draw their existence from the quondam beau; macaronis, and gentlemen of the tippy, still being the playthings of ladies, and used for their diversion.”

And then, inevitably, he gets to attorneys. I was anxious to see what sort of dog my own soul might go into. A noble, intelligent breed? No such luck, I’m afraid. As Jesse writes, “There are also a set of sad dogs derived from attorneys; and puppies, who were in past time attorneys’ clerks, shopmen to retail haberdashers, men-milliners, &c. &c.”

I am not quite sure what classifies as a “sad dog.” Nor do I understand why the souls of attorneys’ clerks go into puppies in the same way as haberdashers and men-milliners. What does a hat-maker have to do with a law clerk? The author does not elaborate. Instead, he goes on to address Pugs, Sheepdogs, and members of parliament:

“…that droning, snarling species, styled Dutch pugs, have been fellows of colleges; and that faithful, useful tribe of shepherds’ dogs, were, in days of yore, members of parliament, who guarded the flock, and protected the sheep from wolves and thieves, although indeed of late some have turned sheep-biters, and worried those they ought to have defended.”

I have had no luck finding a comparable list of the professional/working class souls of cats. However, I am sure we all have our own opinion on that score. 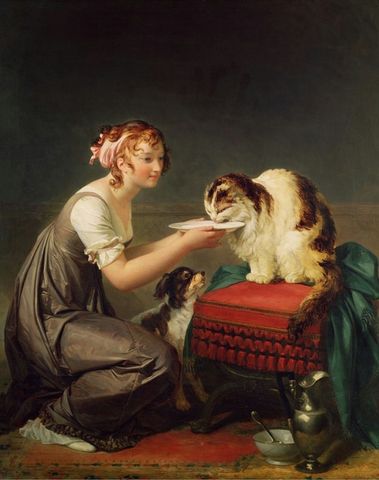 The Horrifying History Of Hair Dye