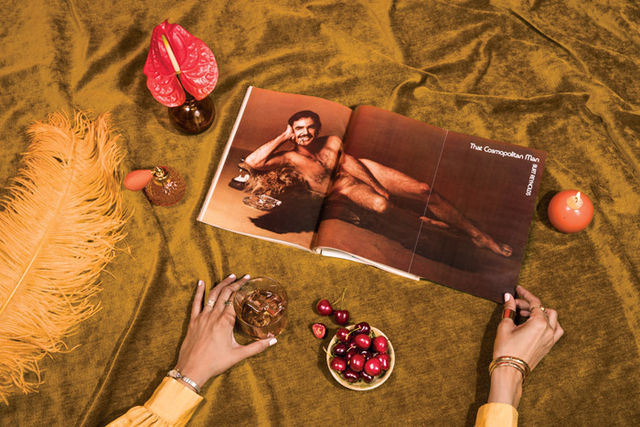 Helen Gurley Brown recalled that she was “taking a bath or making a sandwich or something like that,” when the thought occurred to her, “Why don’t we put a picture of a naked man in Cosmo? Wouldn’t that be fun?” It was the early 1970s; she had taken over the reins of the nearly century-old Cosmopolitan magazine in 1965 and turned it into a publication for the kind of kicky, career-oriented, sexually adventurous, unmarried woman she’d described in her 1962 bestseller Sex and the Single Girl.

Paul Newman, Clint Eastwood, and Joe Namath all turned down the opportunity to be Cosmopolitan’s first male centerfold. But when Brown appeared on the Johnny Carson show with 36-year-old actor Burt Reynolds, she asked during a commercial break if he wanted to pose nude for the magazine and he said yes. (In his 2015 memoir, But Enough About Me, Reynolds says he drank a quart of vodka on the way to the studio where fashion photographer Francesco Scavullo posed him on a bearskin rug, naked, with his hand and arm strategically placed over his genitals.)

The publicity machine cranked into action, and it was assumed that a male centerfold would be a win for feminism. “Members of the Women’s Liberation movement will be glad to hear Cosmopolitan magazine will carry a nude picture of Burt Reynolds in its April issue,” wrote the Mattoon, IL, Journal Gazette.

The April 1972 issue of Cosmopolitan, its cover bearing a bright orange banner announcing the presence of the centerfold inside, hit newsstands in March, its regular price of 75 cents temporarily jacked up to one dollar. It was an immediate sensation. A newsstand in Appleton, WI, reported selling out its order of 50 copies in three hours. (Eventually, the entire print run sold out, a total of 1.55 million copies.) A supermarket in Florida pulled the magazine from its racks, forcing customers to ask for it at the manager’s office. The latter was an extreme reaction. Instead, most complaints stemmed from the modesty of Reynolds’ pose. In the worlds of a male bookseller in Baltimore: “You can’t see a damn thing! He’s lying on his side and his arm is spread over the…uh…area. All you can see is hair.”

Meanwhile, Reynolds himself made the connection between his photo and feminism, telling a gossip columnist shortly after the centerfold appeared that he “did it because it was fun and funky and a good send-up for Playboy and all its male chauvinist nonsense.” (Years later, however, he called the centerfold “a fiasco” and “the biggest mistake” he ever made.)

His argument seemed to be “turnabout is fair play.” And this position was taken by Cosmopolitan itself, which stated in the essay leading to the centerfold, “We think the real reason many girls are annoyed at being considered ‘sex objects’ is that they weren’t, until recently, permitted to return the compliment.”

What's The Deal With Women's Magazines? The "Poptarts" Podcast Takes A Deep Dive

Tags: Burt Reynolds , Cosmo , Cosmopolitan , history , from the . magazine , Museum of Femorabilia , Lynn Peril
Support Feminist Media!
During these troubling political times, independent feminist media is more vital than ever. If our bold, uncensored reporting on women’s issues is important to you, please consider making a donation of $5, $25, $50, or whatever you can afford, to protect and sustain BUST.com.
Thanks so much—we can’t spell BUST without U.