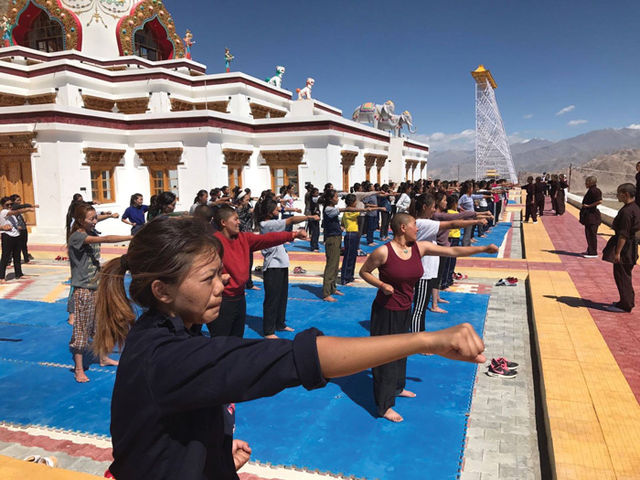 Wake around dawn at Nepal’s Druk Amitabha Mountain Nunnery, just outside Kathmandu, and you’ll witness a remarkable scene. On a giant concrete platform painted with a dragon—a symbol of the nunnery’s lineage—about 200 nuns in maroon robes will be rigorously practicing their kung fu techniques, cutting the air with hand chops, high kicks, and punches.

These are the kung fu nuns of Nepal, an order of Buddhist nuns who are breaking away from the rigid stereotypes that have governed the women in this Himalayan region for generations. Almost 1,000 members strong, the order is an incredible example of what women can accomplish once they’ve been freed from patriarchal restrictions: the nuns perform relief work in areas hard-hit by natural disasters, teach girls self-defense, cycle thousands of miles to raise awareness about human trafficking, monitor local water quality, run health clinics, save hurt animals, and more.

It goes without saying that they’re not your average nuns. They’re tough, able to take month-long hikes through 18,000-foot high mountains without additional oxygen, and spend hours every day exercising. And yet they’re also sassy and girly, says Wendy Lee, a filmmaker who has been traveling for 15 years to the Himalayan region where they live. “The culture [of the nuns] is very feminine, youthful, and playful. They’re always laughing.” 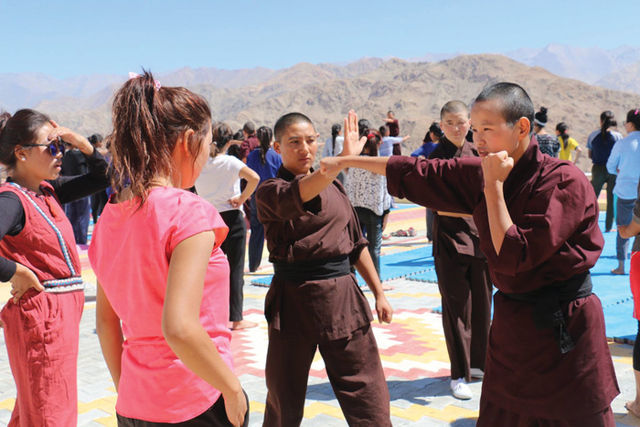 Self-defense workshop hosted by the nuns at the Naro Photang nunnery in 2017
This shouldn’t be too surprising, because these nuns are young; most are in their late teens or 20s. But the nuns also have a sense that anything is possible, and that they can accomplish whatever they set their minds to. And some of that confidence is attributable to one man: the Gyalwang Drukpa, who serves as the head of their order.

Around 2008, the Gyalwang Drukpa returned from a trip to Vietnam, where he’d witnessed Buddhist nuns being trained in martial arts, and he decided to do something similar in Nepal. It was an unconventional notion, since when it comes to women, Buddhism isn’t much more egalitarian than the world’s other patriarchal religions. Though the original Buddhist teachings heralded feminine energy as wisdom incarnate, as with most doctrines passed down over 2,500 years, there have been some changes. Today, Buddhist nuns are traditionally treated as second-class citizens who are expected to cook and clean for the monks; if well behaved, perhaps they’ll be reincarnated as a monk in the next life.

That’s the mindset the Gyalwang Drukpa was bucking. His ideas didn’t come out of nowhere, however; the 1,000-year-old Drukpa lineage, which is a branch of Tibetan Buddhism (though the nuns prefer to call it “Himalayan Buddhism,” because most have never been to Tibet), has always been considered unconventional and anti-establishment. “We unofficially call it the ‘get off the meditation cushion’ lineage,” says Carrie Lee (no relation to Wendy Lee), a scholar at the Atlantic Council and the former director of the Live to Love Foundation, which was started by the Gyalwang Drukpa. Unlike most monks and nuns who spend their time praying, “they like to get off their butts and do something.” 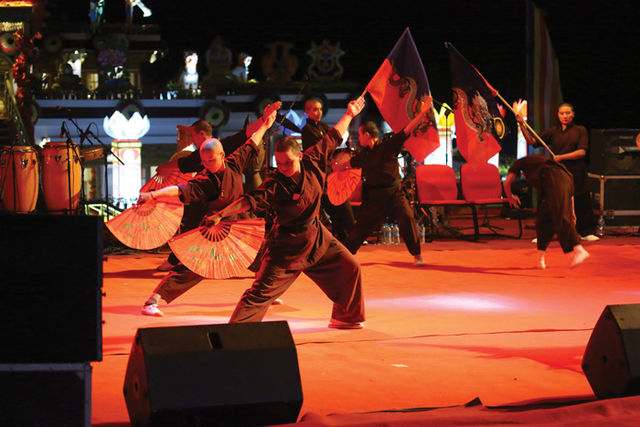 The nuns hold a kung fu demonstration at the Naropa Festival at Hemis Monastery in Ladakh, India, in 2016
When the kung fu nuns began their training, the Himalayan region was already experiencing something of a shift regarding women’s rights. “The empowerment of women began at least 20 years earlier [than the Gyalwang Drukpa’s fateful 2008 trip to Vietnam],” says Karma Lekshe Tsomo, a Buddhist nun and professor at the University of San Diego who was part of the original wave of kung fu nuns. “[The Gyalwang Drukpa’s] actions were a ripple effect from the international Buddhist women’s movement.”

Nonetheless, his actions were significant. He instructed the nuns of his order—who come from Nepal, northern India, and Bhutan—in kung fu, strengthening their bodies and giving them confidence through daily training sessions that continue today. It’s a practice that incorporates physical exercise, self-defense training, and meditation techniques, all of which combine to make practitioners’ minds as strong as their bodies. For women to learn these disciplines was so unusual for the region that the nuns became known for it, and the “kung fu nuns” moniker stuck.

The Gyalwang Drukpa also educated these nuns on the highest levels of esoteric Buddhist teaching, which had formerly been exclusive to men. And in addition to kung fu, the nuns were also taught traditionally masculine skills like plumbing, building, and electrical work, usually by watching local male workers and teaching one another. 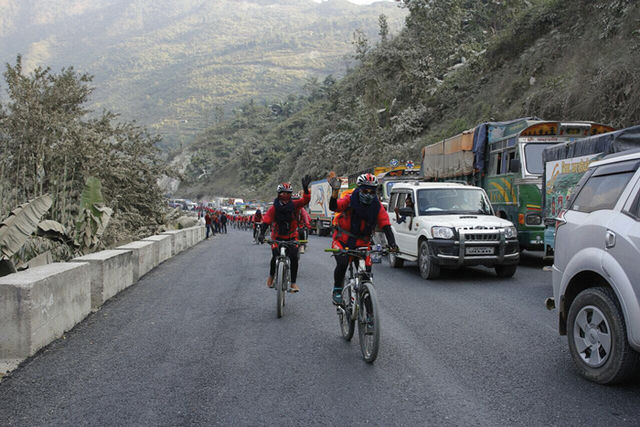 the 2016 bicycle yatra in Kashmir
So when a devastating earthquake hit Nepal in 2015, the nuns were ready. Refusing evacuation from the main nunnery outside Kathmandu (several others are scattered throughout the Himalayas), they brought supplies to some of the country’s hardest-hit areas and helped rebuild homes. And when they saw how vulnerable many of the young girls in the poor villages they traveled to were to sex trafficking, they launched their next crusade—one that continues today.

In 2016, about 400 nuns left on a 3,000-plus mile “bicycle yatra,” or pilgrimage, through thousands of villages across the Himalayas. And earlier this year, 250 nuns embarked on a second yatra across Nepal and India. On both trips, their formal goal was to advocate against human trafficking, so the nuns spoke out about it with the villagers they met, and taught self-defense classes to young women along the way. More practically, however, they demonstrated the value of girls and women simply by showing up on their bicycles. In Himalayan culture, women and girls are frequently viewed as not worth keeping around because they’re seen as unable to do agricultural work. But if they’re capable of cycling thousands of miles, as the nuns illustrate, they’re clearly strong enough to farm—and should be valued.

“They thought we all were boys—they were very surprised to see girls doing this kind of thing,” says Jigme Karuna Yangchen, a nun who participated in both bicycle trips. Now 30, Karuna joined the nunnery nine years ago and says the discipline there has changed her life. But she also values the opportunity to inspire village girls and women, something that occurred repeatedly on the bicycle trip. “In the village, there are so many people who are so scared, and they think they cannot do things they want to do,” she says. “So we showed them an example that they can do it, that they can come out into the world, that girls can do what they want to.”

“They thought we all were boys—they were very surprised to see girls doing this kind of thing.”

But some responses weren’t so positive, says Jigme Yeshe Lhamo, 28, another cyclist who went on both yatras. “When we first started cycling, we got loads of negative comments,” she says. “People said to us, ‘Oh, why are the nuns cycling? They should do meditation. Why are they wearing those shorts?’” Plus, it was grueling. “It was very, very hard,” she says, outlining a schedule that included roughly eight hours of cycling per day. “But it was fun—not because we were enjoying it, but because we see our goal, and we are completing our goal. That gave us some kind of happiness and made us more confident to do it again.”

Yeshe has been a nun for 12 years. She originally ran away from home to join the order after her parents forbade her to do so. They were worried that the life of a typical nun was too difficult, and Yeshe’s life is not easy, that’s true. She spends her days praying, exercising her body, working at the nunnery—currently she does administrative work, but she’s also trained in plumbing and solar panel installation—and engaging in a wide array of service projects. But it’s a lifestyle that has turned out to be extremely empowering for her—even though Yeshe and other nuns shy away from that word, believing that they are simply expressing a strength that was already inherent in them. “Every year,” she says, “I’m gaining more power to go toward my goals."

Which is good, because the nuns have faced considerable pushback for rejecting cultural norms. “There’s been a huge backlash in the more conservative communities of the Himalayas. The nuns have been called blasphemous, heretics–they’ve been harassed,” says scholar Carrie Lee. “The nuns won’t say this because they want to portray the Himalayan community as peace-loving, but they’re bombarded with hate mail.” 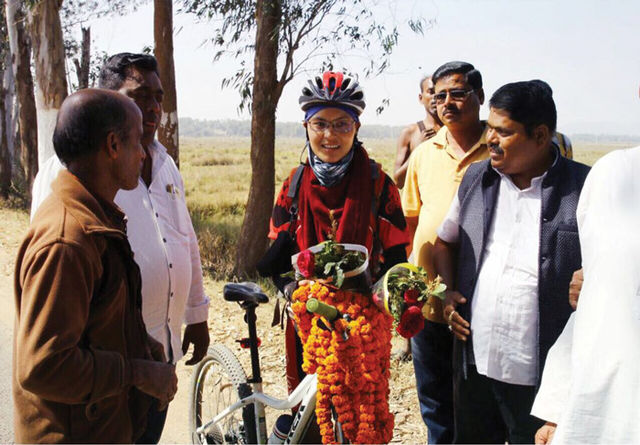 At the same time, however, they’re undeniably making a difference. For example, they’ve partnered with several nongovernmental organizations working in the area, providing assistance to doctors’ groups that offer free healthcare to local villagers, and they are also actively monitoring the water quality in nearby rivers. “They’re able to develop a baseline of the community’s water supply, track it over time to see how it’s changing, and develop plans for solving problems,” says Marc Yaggi, executive director of the New York-based Waterkeeper Alliance, which trained the nuns. “They’ve been very active and engaged.”

Most importantly, perhaps, these nuns are viewed as heroes in their home communities and are deeply respected, with local politicians routinely seeking out their favor and aiming to collaborate with them. Many of the nuns come from Ladakh, in northern India, and Carrie Lee says there’s been real growth in that region in the number of women competing in sports, as well as a rise in young female leaders.

Meanwhile, the number of kung fu nuns has grown from 30 to 1,000 over the past decade. The order has never before had this many nuns, and there’s a waiting list to join. More nuns means more ways to be engaged, and the young nuns are now scheduling self-defense trainings for women across the region.

On an individual level, becoming a kung fu nun can be utterly life-changing. “We don’t have to depend on others—we can do everything by ourselves,” says Yeshe. Musing on what her life might have been like had she not become a nun, Yeshe says, “I maybe would not be this confident. Even if I had a very good job, I would only think about myself and my family, only think about my community. But now, I think about all the animals and all sentient beings, I think about the whole world.”

Top photo: Self-defense workshop hosted by the nuns at the Naro Photang nunnery in 2017
By Amanda Abrams
Photos courtesy of the Live to Love Foundation
This article originally appeared in the August/September 2018  print edition of BUST Magazine. Subscribe today!