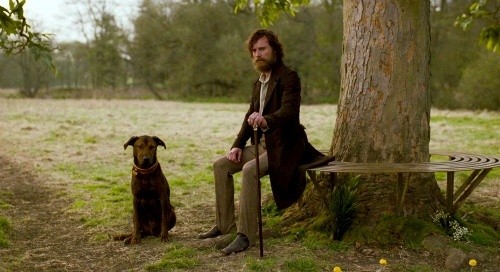 According to Charlotte Brontë’s 1847 novel, Jane Eyre, a Gytrash is a goblin or spirit which takes the form of a horse, mule, or large dog. Typically found in the North of England, the Gytrash “haunted solitary ways” and often surprised unwary travelers as they journeyed alone in the dusk. Jane Eyre herself encounters what she believes to be a Gytrash one bleak, January evening as she is walking from Thornfield Hall to post a letter in the nearby village of Hay. Alerted to its arrival by a loud, clattering noise, Jane observes:

“It was very near, but not yet in sight; when, in addition to the tramp, tramp, I heard a rush under the hedge, and close down by the hazel stems glided a great dog, whose black and white colour made him a distinct object against the trees. It was exactly one form of Bessie’s Gytrash— a lion-like creature with long hair and a huge head: it passed me, however, quietly enough; not staying to look up, with strange pretercanine eyes, in my face, as I half expected it would. The horse followed,—a tall steed, and on its back a rider. The man, the human being, broke the spell at once. Nothing ever rode the Gytrash: it was always alone; and goblins, to my notions, though they might tenant the dumb carcasses of beasts, could scarce covet shelter in the commonplace human form. No Gytrash was this,—only a traveler taking the short cut to Millcote.” 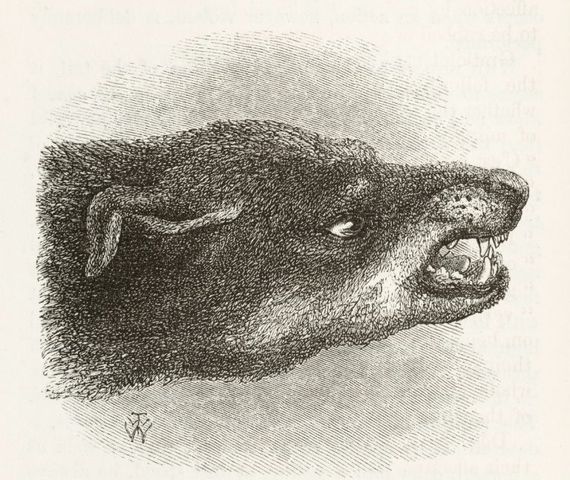 Snarling dog from Darwin’s Expression of Emotions in Man and Animals, 1872. (Image Courtesy of The Wellcome Library, CC BY 4.0.)

It is thus that Jane first meets Mr. Rochester and his dog, Pilot. But what of the Gytrash? Was it really a 19th century legend? Or was it something that Charlotte Brontë made up out of whole cloth? The Oxford English Dictionary describes a Gytrash as: "An apparition, spectre, ghost, generally taking the form of an animal.”

Oddly, Oxford’s earliest example of the term is Brontë’s own Jane Eyre. However, looking back even further, I found a brief mention of a Gytrash in William Holloway’s 1839 A General Dictionary of Provincialisms. Holloway describes the Gytrash as: "An evil spirit; a ghost.” 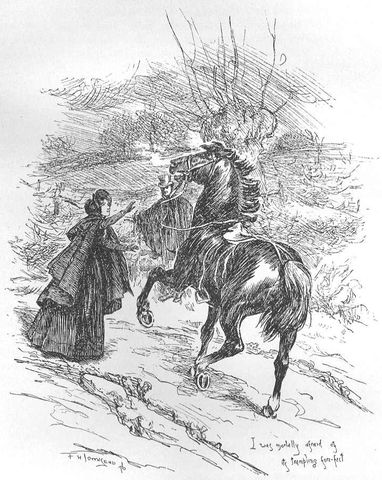 Jane Eyre believes she has encountered a Gytrash. Illustration by F. H. Townsend, 1868-1920.

Further back still, I discovered another brief, but informative entry on the Gytrash in Reverend William Carr’s 1824 Horæ Momenta Cravenæ. It reads: "An evil spirit, a ghost, a pad-foot.”

As much as this connection to Sirius Black (whose animagus form is a big, black dog named Padfoot) might interest those among us who are fans of Harry Potter, it still does not tell us much about the origins of the word Gytrash or what the legend is based upon. Luckily, a bit of investigating led me to an 1895 report of the Transactions and Proceedings of the American Philological Society. Within its pages, the report addresses the mystery of the Gytrash, explaining: “No one, so far as I know, has recorded any views as to the origin of this word.”

The Philological Society then goes on to separate the word Gytrash (or Guytrash) into Guy and Trash, analyzing each word individually with an eye toward discovering the origins of the legend. With regard to the word Trash:

“Trash is the name of a particular kind of specter. It is a variant of ‘trush’ for thrush, and that is a variant of ‘thurse’, a goblin; as is fully set forth in this paper under THURSE [as defined in another section of the report]. Hence guytrash [or] gytrash is Guy-Trash, parallel to Hob-Trush, Hob-Thrush, or Hob-Thurse.” 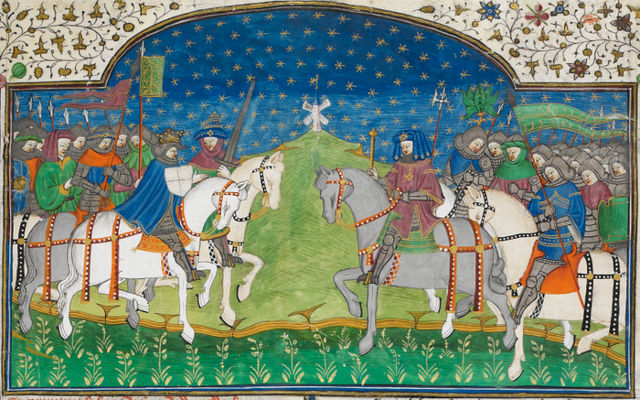 Guy of Warwick, from an illumination in The Talbot Shrewsbury Book, 1444-45.

As for the word Guy, The Philological Society was at a loss to discover its origins until they happened upon the work of 16th century Scottish poets William Dunbar and Sir David Lyndesay. In one of Dunbar’s poems, he mentions “the spreit of Gy.” And in Lyndesay’s 1552 poem titled “Dreme,” he references “the gaist of Gye” while describing, in verse, how he put on various “grotesque disguises to amuse the infant prince” who would later become King James V of Scotland. The relevant portion of “Dreme” reads:

The Philological Society first assumes that this “gaist of gye” refers to Guy of Warwick, the English romantic hero. However, they quickly dismiss this theory since none of the popular legends involving Guy of Warwick make reference to Guy’s ghost. They then go on to address the possibility that Guy in this context is a reference to Guy Fawkes, writing:

“The word guy, meaning ‘any strange looking individual,’ an awkwardly drest person, ‘a fright,’ is regarded as an allusion to the effigy of Guy Fawkes, formerly carried about by boys on the fifth of November. I suppose this is true; but it may be that the fading ‘spreit of Gy,’ the Gytrash, is also present in this use of guy.” 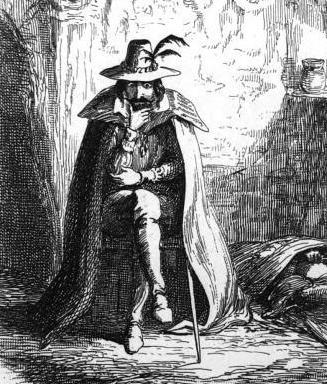 Regardless of its actual origins, in time, the term Gytrash “came to lose all reference to a particular spirit.” It was eventually applied to any apparition of terror and then, “by mixture of fables” was imagined as a goblin that took the shape of a horse or dog.

Today, the legend of the Gytrash has faded from memory. That we still know of it at all is largely as a result of Charlotte Brontë having mentioned it in Jane Eyre. For this reason, if you are a fan of 19th century English Literature, I urge you to take a moment away from goblins, ghosts, spectres, and shapeshifters this Halloween to consider the Gytrash. The name may be a little odd and the provenance of the legend a bit uncertain, but whether the creature appears in the guise of a dog or a horse, there is surely no more quintessentially 19th century apparition around. 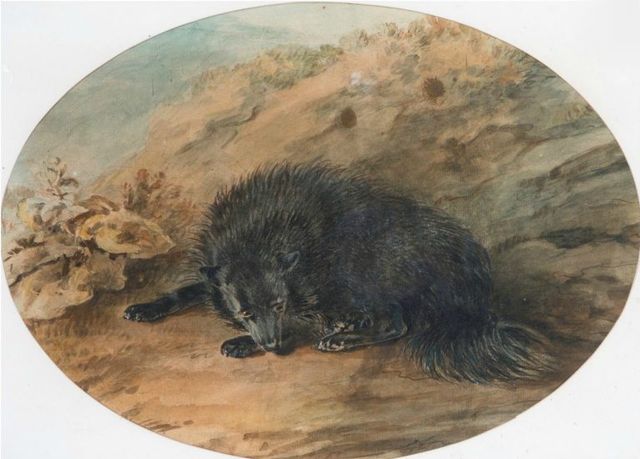 This story was originally posted on mimimatthews.com and was reposted with permission.

The Strange But True Story Of A Dog Arrested For Theft

Tags: 19th century , Victorian , Charlotte Bronte , Jane Eyre , monster , mystery , legend , history , literature
Support Feminist Media!
During these troubling political times, independent feminist media is more vital than ever. If our bold, uncensored reporting on women’s issues is important to you, please consider making a donation of $5, $25, $50, or whatever you can afford, to protect and sustain BUST.com.
Thanks so much—we can’t spell BUST without U.