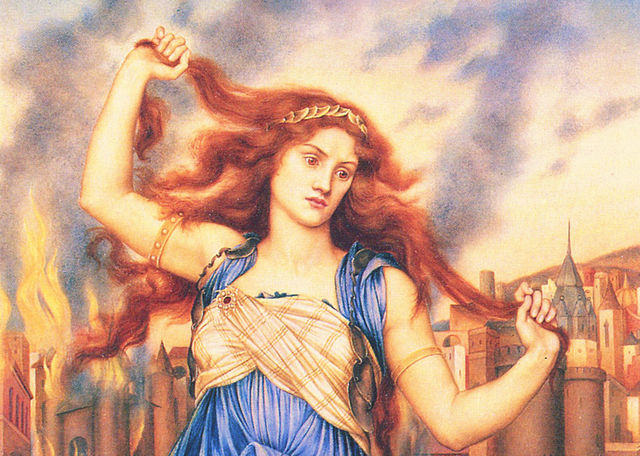 The tragic story of Cassandra, a princess of the ancient city of Troy, has a lot to show us about how it is to have magic abilities in a Muggle world. Cassandra was a young and beautiful royal in a grand city who seemed to have it all, but her charmed life changed forever when the god Apollo caught sight of her and decided he had to have her for himself. In order to enchant the young beauty, Apollo bestowed upon her the one thing she didn’t have: the gift of psychic visions.

Apollo’s plan was to make the princess his bride once he had given her the power of foresight. In his eyes, not only was this a fair exchange for the “gift” he had given her, but he believed she would be forever grateful to him for giving her magical powers. In an odd twist of fate, Cassandra was able to use the godly magic put upon her against Apollo, evading every move he made towards her with her psychic foresight.

While Cassandra successfully avoided Apollo’s attempts to destroy her vow of chastity, she did not come away from the incident unscathed. In a rage, Apollo turned his gift into a curse, making it so that no one would ever believe Cassandra’s prophecies. Cassandra responded to this curse by teaching her twin brother, Helenus, to make predictions so that harm would not come to the city if they could help it. Cassandra’s most famous prediction was the fall of Troy as a result of the Trojan War. Had her parents, King Priam and Queen Hecuba, believed her, the city of Troy would have reigned supreme. Unfortunately, her family had believed her to be mentally unsound for many years and there was no hope of them believing in her terrible vision. Her twin brother did foresee the war, but heeded their father’s call to battle.

In Cassandra’s story, she struggles with a form of deep-seated misogyny that seemed to infiltrate society from Mount Olympus down to the earthly realm. Societies around the world burned witches, persecuted women who practice forms of healing that were viewed as magic, and kept women ignorant and bound, punishing them for being female, while deeply distrusting of their abundant intuitive insights. Times are different in some of the world now, but there are still plenty of people who don’t trust that these abilities exist. Cassandra’s mythology can rise up to teach us about the mistreatment of those with psychic and mystical abilities. How do those with the gift of foresight handle living in a world of skeptics?

Renee Watt (@rainbowglitterstar), a clairvoyant, experiences what is considered a modern version “Cassandra Syndrome,” saying, “I have never felt isolated or deemed 'crazy' for my abilities within the esoteric community. I have encountered a lot of men in bars or socially who use my occupation as an opportunity to try and make me seem unintelligent.”

BUST astrologer Sonia Ortiz (@soniaotarot) has encountered her own version of Cassandra‘s tale. She says, “I have definitely encountered this from people in my personal and professional life. In the past, people that I have been close to always made a case that I was unwell and needed medication.” Ortiz adds that she believes things are changing in how the world views all psychics and mediums, but it is up to the mystics to stand firm and represent: “I would say that society is definitely more open about embracing intuitive folks. I think there is always more room for improvement as not everyone is very welcoming and always quite skeptical of anything related to intuition.”

But what about the way people who use intuitives, psychics, and mediums treat the mystic’s code of ethics? Famed psychic medium and astrologer Jessica Lanyadoo (@jessica_lanyadoo) explains that being psychic and telling prophecies is not about being a “crystal ball." Lanyadoo says, “Helping people to ask the right questions is a big part of my job,” and “having the ability to counsel people through their concerns to come up with the most constructive and insightful answers that we can find.”

Overall, using gifts to help others is wonderful, but it’s important for the seer to state their boundaries and make the rules of the interaction. As Lanyadoo says, she “would rather disappoint a client then compromise my ethics.” Having integrity, as poor Cassandra of Troy did, helps make a space where clairvoyants and all forms of esoteric professionals can, after many centuries in the dark, do their work out in the open, using their gifts to help people while receiving the respect and credit they deserve.

Uranus Is Now Retrograde—Here's What To Expect

Tags: Cassandra , Cassandra Syndrome , mystics , astrology , mythology , Sonia Ortiz , Lisa Stardust , Renee Watt , Jessica Lanyadoo
Support Feminist Media!
During these troubling political times, independent feminist media is more vital than ever. If our bold, uncensored reporting on women’s issues is important to you, please consider making a donation of $5, $25, $50, or whatever you can afford, to protect and sustain BUST.com.
Thanks so much—we can’t spell BUST without U.