I Went To BeautyCon With A Message About Breast Cancer, And No One Would Look Me In The Eye 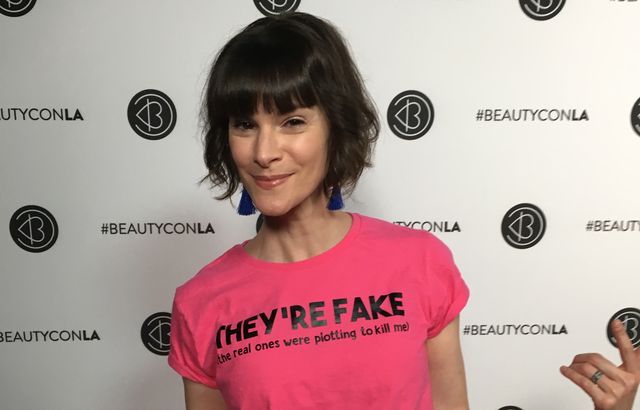 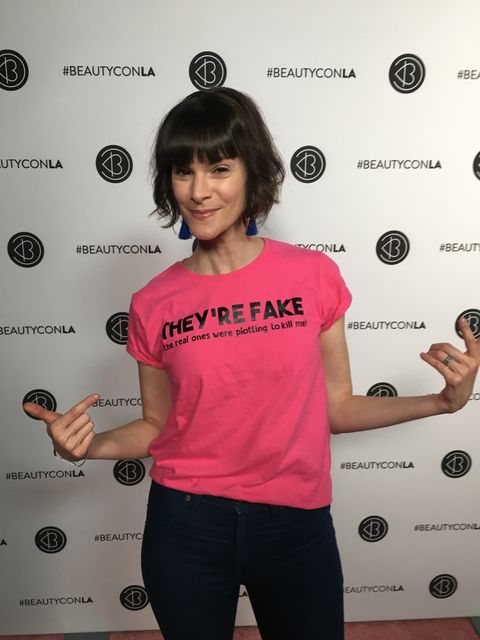 Okay, the title might be a slight exaggeration, but not really.

I'm a working actor, and after one of my scenes in Brooklyn Nine-Nine went viral, I was invited to attend BeautyConLA. I was super excited (and also scared out of my mind) to wear my new bright pink shirt bearing the words, “THEY'RE FAKE (the real ones were plotting to kill me).” The last few years of my life have been surreal, involving my sister’s going through chemotherapy for breast cancer and my ultimately undergoing preventative surgeries to remove my ovaries, Fallopian tubes, uterus, and both breasts. You see, I’m what’s called a “previvor.” I decided to remove parts of my body that will have close to an 85% chance of developing cancer before the cancer starts forming. The availability of genetic testing for the BRCA-1 and BRCA-2 gene mutations will soon put more people in the position of having to make the difficult decision between removing their parts preventatively or waiting to see if cancer develops (and risk many sessions of chemotherapy and radiation, or even death).

Undergoing a preventative double mastectomy scared the crap out of me. Not literally. The pre-surgery enema did that. However, once I’d had it done, I had a surprising side effect: I felt insanely sexy without boobs! The kind of no-bra androgyny really appealed to me (except at Ren Faire, when I coveted every amazingly squished up pair of knockers I could see). Feeling more beautiful now and having the relief that I was GOING TO LIVE, I wanted to share the message that you can be a previvor or cancer survivor and love your new, interesting, sexy body.

Now, you may be thinking to yourself, “Devin, why did you even go to BeautyCon? It’s all about makeup, and you had to have known that.” Well, I truly felt that there would be interest in a voice about inner beauty and the beauty of previving/surviving cancer. For the love of Jove, the theme this year was “Be Yourself” or “Proud to Be Me” or some crap like that.

However, stepping into BeautyCon and onto the red carpet, it was like I was invisible. Not only did no one ask me about my shirt, but no one actually appeared to be able to see me. People cut in front of me in lines, and the vendors would talk to everyone who walked up to their counters but me.

Oh, wait. One red carpet interviewer from a very popular entertainment TV show asked me if he could take a photo of my shirt with his own personal phone, but then told me to my face that he didn’t want to actually interview me.

Oh, wait again. There was a lovely event staff person on the carpet who asked about my shirt and then took it upon herself to “handle” me, introducing me to interviewers. I wish I had gotten her name, especially because she was the only person who talked to me the entire day. She actually secured me about two interviews with online media. I discussed the BRCA-1 mutation and the excitement of being a previvor and feeling beautiful without my breasts. Neither of these interviews was put up onto the media outlets’ websites.

Don’t worry, you guys. I know I’m not a beauty A-lister like Kim Kardashian or Jessica Simpson, so I didn’t expect everyone to want to interview me. But I guess I thought that breast cancer was no longer a taboo or embarrassing subject for people in Hollywood to discuss. I mean, I even had someone comment (endearingly?) in the midst of my surgeries that I was “pulling an Angelina Jolie.” More and more women are going to be faced with making this body-altering decision in order to live, and we are going to need to change our paradigm when it comes to beauty.

Maybe I should’ve suspected that BeautyConLA wouldn’t be the right venue for my message. Or maybe I should’ve worn leather pants and stilettos (those are still considered cool, right?) instead of jeans and chucks along with my pink shirt. Yeah. That would’ve worked.

Get Off Of My Chest: On People's Reactions To My Breast Cancer

My Best Friend Has Breast Cancer

Devin Sidell is a Los Angeles-based actress whose Brooklyn Nine-Nine singing criminals scene recently went viral.  She has appeared on numerous television shows including Ray Donovan, Parks and Recreation, and NCIS, and is currently working with screenwriter Steven Sears on a dark comedy feature film based on her preventative surgeries.  You can follow her on Twitter at @devinsidell and Instagram at @devin.sidell at visit her website devinsidell.com