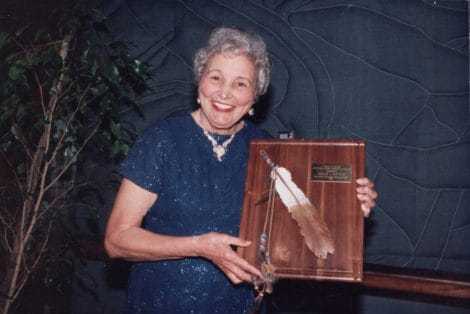 Today’s Google Doodle celebrates Mary G. Ross, the first Native American woman engineer, on what would have been her 110th birthday.

Mary Ross was a trailblazing engineer. According to Time, she made momentous contributions to the American space program, worked hard to support other Native American and women engineers, and was even a member of a top-secret think tank that developed designs for interplanetary space travel.

But before all of that, Mary Ross was born in 1908 in Park Hill, Oklahoma to a Cherokee family. Her great-great grandfather was Cherokee Chief John Ross. According to The Independent, the community in which Ross grew up greatly valued learning. “I was brought up in the Cherokee tradition of equal education for boys and girls,” she once said. Ross went to college in Tahlehquah, the capital of the Cherokee nation, when she was just 16. She graduated at age 20 with a degree in mathematics and became a high school teacher. Ross was also quickly becoming an advocate for Native Americans—she spent time in Washington, D.C., working for the Bureau of Indian Affairs.

Then Ross decided to go back to school for her Master’s degree in mathematics, because she felt that it would help her go “farther and faster." Plus, she loved it, saying, “Math was more fun than anything else.”

As Ross rose higher in the field of mathematics, she often found herself the only woman in the room. In one interview, Ross said, “I sat on one side of the room and the guys on the other side of the room. I guess they didn’t want to associate with me. But I could hold my own with them and sometimes did better.”

Lockheed Missiles and Space Company hired Ross as a mathematician, and, recognizing her serious talent, sent her to UCLA to get certified as an aeronautical engineer. She was the first female engineer at Lockheed, working on fighter jets and then on space travel.

Ross was instrumental in the design of the Agena rocket (plans for which are pictured in today’s Google Doodle), which paved the way for America to land on the moon. She also became a member of SkunkWorks, a top-secret 40-person think tank working on plans for interplanetary space travel. Once again, Ross was the only woman in the room. But that had never stopped her before.

And she wasn’t done—Ross wanted to use her success to uplift others. She supported Native American communities by serving on the Council of Energy Resource Tribes and the American Indian and Science and Engineering Society. She was also an active member of the Society of Women Engineers. She encouraged both Native Americans and women to work in science, technology, engineering, and math by establishing scholarships and educational programs.

Ross also helped open the Smithsonian’s National Museum of the American Indian just a few years before her death in 2008.

Mary G. Ross was a trailblazing engineer who dedicated her life to furthering the scientific accomplishments of our—and then to ensuring that others could follow in her footsteps.