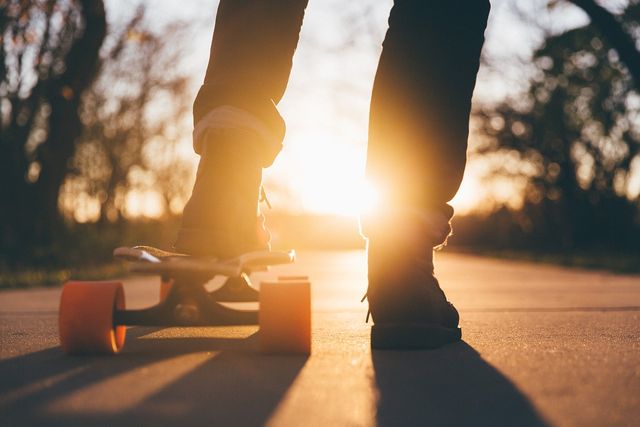 When I was little, my mum bought my brother and I a skateboard to share and we were allowed to skate around a small concrete square in our backyard as she watched. When I decided to get back into skateboarding as a young adult woman, I was excited to go out and experience the freedom of skating outside, with the wind in my hair and the roar of the wheels underneath me. But there’s always some jerk that waits until I skate past to shriek uninspired jabs at me. This happens on the streets and in skate parks, and it comes from boys of kindergarten age to men older than my father.

Women aren’t new to skateboarding. They’ve been leading the way since the sport began. But women weren’t a part of the professional skateboarding industry until 1998, when Elissa Steamer was signed to Toy Machine as the first female pro skateboarder. Things haven’t gotten a lot better in the past 20 years and, as is the case in many sporting industries, women are severely underrepresented and underestimated. There’s a lingering sexist culture in skateboarding, like when pro skater Nyjah Huston was quoted in Trasher magazine in 2013 saying, “skateboarding is not for girls at all.”

However, with the popularity of the sport increasing due to the inclusion of skateboarding in the 2020 Olympics, I’ve noticed more women than ever are joining the community. These skaters are encouraging other women to get on their boards and challenge the sexist treatment of female skateboarders.

April Caslick is one of the most community-involved skateboarders in Newcastle, Australia, and has been street skating (focusing on doing tricks and jumps in public spaces) for 15 years. “It used to be an outcast thing,” April explains when talking about how skateboarding has changed since she started skating in high school. “Now it’s more family orientated. There are heaps of bowls [the empty inground pools found in skate parks] going in, and I guess you would call that the softer side of skateboarding. Not that it’s soft, but street skating is definitely more of a blood sport than park or bowl. When I was skateboarding in high school, we didn’t have any sort of nice ramps like that; you would go and cheese grate yourself over concrete every weekend and go to school with scabby knees and elbows every week.”

Caslick says that the gradual acceptance of skateboarders by the community has been slow, and that skateboarding events in the past have been focused on boys. “When they put clinics on, it's usually going to be little boys between 5-12, and they’re all going to be ratbags. Even as an older woman, you’re probably not going to want to go hang out in that scene,” Caslick says, but adds that this has started to change as more women begin to push the city council for more public places to skate. “Heaps more women are joining skating. There’s a lot more things where the council make it more accessible for everyone, and with more women learning to skate, there are more female-specific things going on.”

Even as one of the most respected and well-known skateboarders in Newcastle, Caslick still gets harassed by men when she skates. “The most cliché thing is, can you do a kickflip? And I’m like yeah, of course, I can do a kickflip, but I’m not going to do a kickflip for you,” she says.

A kickflip is an especially hard trick to learn, and there is a common trend in skateboarding culture of yelling "do a kickflip!" to skaters as a joke. For many women, unfortunately, being harassed while skateboarding in a constant reality. This includes 22-year-old skater Serena, who has been skating for just two years.

“I get yelled at least twice a week,” says Serena, who mostly uses her board to go back and forth to work. “They mostly yell ‘do a kickflip’ or call me a slut. It used to really upset me, but now I just don’t give a shit. It’s just toxic masculinity, and they’re probably jealous girls can skate better than them.”

Serena says she noticed there’s a culture that doesn’t encourage girls to try and join skateboarding, and that most local scenes are dominated by men. “It upsets me that women are always a rarity in the skateparks whenever I go past. I want to see more women skating down the street and doing tricks in the skateparks without them being afraid some dickhead is going to make them feel uncomfortable.”

Both Caslick and Serena argue that the toxic masculinity found in the skateboarding community is rooted in old-fashioned sexism. “That sort of boy with that mindset, even if I didn’t have a skateboard on my feet, they’re still going yell something like ‘get your tits out’ or ‘give us a smile’ or something stupid,” says Caslick.

Even very young skateboarders who are trying to start out experience sexism or harassment while skating. Ten-year-old Amira Phillips has experienced verbal harassment while on the streets and says it made her feel very unsafe. “As I’m just starting out, it made me leave the park for a while until I found my confidence again. I don’t skate at skate parks when there are teenagers with their shirts off. I feel a bit intimidated, they’re older and they’re better and they’re boys," Phillips says.

Female skateboarders on Instagram also experience harassment.  NefariousCrew is a London-based girl skate crew that has over 9,000 followers and has received sexist, homophobic and racist comments on their page because they feature women. NefariousCrew aims to showcase the talented women from London, but many women in the skateboarding industry experience unnecessary sexualisation in the sport.

“I was once offered a sponsorship by a Dutch company called Feisty,” says Rachael, who is a member of NefariousCrew and has expressed her exasperations over not being taken seriously as a skateboarder. “I quit after a few weeks because it seemed very sexual and every post started with ‘feisty Rachael.'"

Rachael says she’s also experienced support too far in the opposite direction as well. “The boys I skate with are super cool, but I once skated with a guy that was too supportive, then it got a bit patronizing.”

Despite all the jerks, there’s a reason all the girls and women I spoke with unanimously agreed that skateboarding has been a wonderful part of their lives. They all talked about positive memories and the bonds they made while skateboarding.

Caslick says that regardless of gender, once you start skating, everyone becomes like a family. “Absolutely, cause we’re so small you can’t really have something against someone else. We just try and support each other and build each other up so we can make the scene bigger for each other, to give each other more opportunities.”

She also emphasisez that learning to skateboard builds up more skills and qualities than just balance. “Skateboarding is pretty character building. If anything, you start skateboarding you’ll learn to bounce off the ground and you’ll learn to bounce negative things off you as well. It’s probably good too, cause you’ll get a little crew together and you’ll all go skating and it’s so fun and you get to laugh at each other when you fall off.”

Serena is also passionate about teaching other women, young and old, about the unknown joys of skateboarding. “I think more girl skaters should encourage their mates to go skating and it would be really, you know, positive for everyone,” she says. She explains that even though she isn’t a part of the wider local skating community, she still has her own skateboarding group.  “It’s a bit different when you aren’t going to the bowls or the skateparks, you don’t meet as many people. But I go out with all my mates and we always have the best time. Some of my friends teach each other tricks and that’s so cute. There’s nothing like just skating down the street in summer, we would all skate to the beach and go for a swim. Just skate anywhere we need to go.”

For all of us girls who skateboard, the sport is a hugely enjoyable pastime and there’s no reason it should make us feel targeted or excluded. Skateboarding encourages fitness and balance and tenacity. Through skateboarding, I learned how to bleed and not cry, which is an important life skill. No one is more disciplined than a skateboarder with bloody knees who is determined to master a new trick. Plus, some of the friendships you can make while skateboarding will be lifelong. After 70 years of skateboarding being focused on men, and a longer history of men feeling threatened by badass women, it’s time for girls to rise above all the negativity and show the world what we can do.

In The 1980s, This All-Girl Skateboard Gang Took Over The Streets Of L.A.

Meghan Richardson is an aspiring journalist, currently studying at the University of Newcastle, Australia. Meghan has been published by the Newcastle Young Writers Festival, The Line, and Opus Magazine. Follow her on Twitter and Instagram @megapoor.

Tags: skateboarding , women in skateboarding , skateboard , harassment
Support Feminist Media!
During these troubling political times, independent feminist media is more vital than ever. If our bold, uncensored reporting on women’s issues is important to you, please consider making a donation of $5, $25, $50, or whatever you can afford, to protect and sustain BUST.com.
Thanks so much—we can’t spell BUST without U.