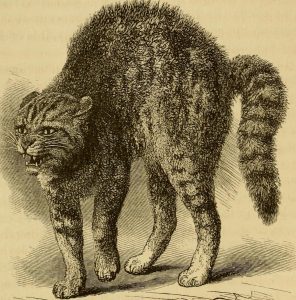 During the late 19th and early 20th centuries, there was a time when electric streetcars shared the road with mounted riders, horse-drawn carriages, and streetcars pulled by teams of horses. Many interesting animal stories have come out of this brief period of crossover between horsepower and the rise of the modern machine. Naturally, the bulk of these stories feature horses, but one of the most bizarre accounts I have found involves not equines, but felines. According to the September 6, 1893 edition of the Edinburgh Evening News, 19th century cats in the city of San Francisco had “grown so big and so numerous as to constitute a nuisance and a menace.” The cause of their enormous size? The introduction of electric streetcars!

Introduced to San Francisco on April 27, 1892, the SF & SM Railway (San Francisco and San Mateo Railway) was the city’s first electric streetcar system. According to Walter Rice at the Virtual Museum of San Francisco, the line ran from the “Union Ferry building at the foot of Market Street” via a circuitous route all the way to 30th Street. Electric power for the streetcars was supplied by “General Electric dynamos” and the motors were powered by “coal fired Corliss type stationary steam engines.” 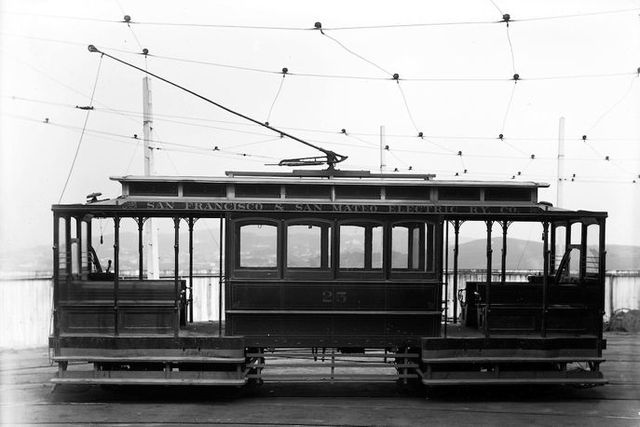 There was no electricity in the rails themselves, yet the 1893 Edinburgh Evening News reports that each evening, when the cars stopped running for the night, cats from all over the city would congregate at the tracks and lick the rails – with what some might call electrifying results. As the article relates:

“Carefully selecting a suitable spot on the rail, the cat will lick the rail and then lie down upon it a few minutes. Pretty soon he will roll over and will stand with all four feet upon the rail and with wild eyes, arched back and distended tail, will yowl and dance, and amuse himself for an hour at a time.” 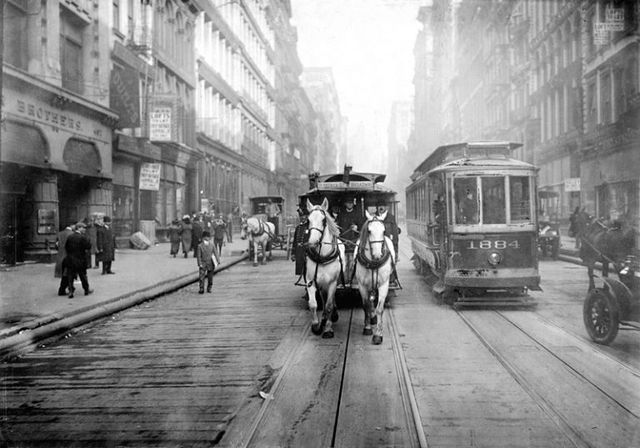 A Horsecar and an Electric Streetcar, New York

So bizarre was this nightly occurrence that an “expert electrician” was consulted on the subject. The electrician’s opinion? The Edinburgh Evening News reports:

“…he could not imagine what the cats could get out of the rails, but whatever it may be, the cats of the city are said to be attaining an enormous size, unheard of before, and to keep themselves in wonderful condition.” 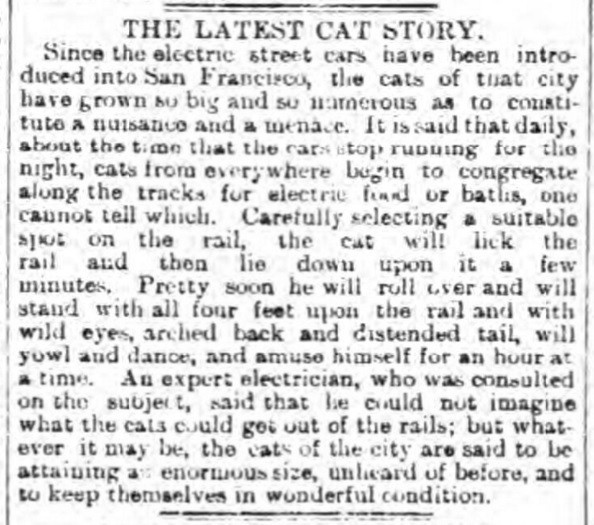 Is there any truth at all in this strange story? I really do not know. However, as someone born and raised in the California Bay Area, common sense tells me that if the cats congregated at the tracks at all, it was likely to curl up on them and absorb some residual warmth. San Francisco can be quite chilly in the fall and winter. As for cats yowling, dancing, and growing to an enormous size as yet unheard of in the 19th century? I’ll let you be the judge.

This piece was originally published on MimiMatthews.com and is reprinted with permission.

top photo: Hissing Cat from Darwin’s Expression of Emotions in Man and Animals, 1872.

The Aston V. Elliot Case Had Noblemen, Adulterers, And All Kinds Of Regency-Era Drama

How Unusual Were Forty-Year-Old Victorian Brides?

Tags: history , Mimi Matthews , cats , streetcars , history , streetcar , cat , Mimi Matthews
Support Feminist Media!
During these troubling political times, independent feminist media is more vital than ever. If our bold, uncensored reporting on women’s issues is important to you, please consider making a donation of $5, $25, $50, or whatever you can afford, to protect and sustain BUST.com.
Thanks so much—we can’t spell BUST without U.