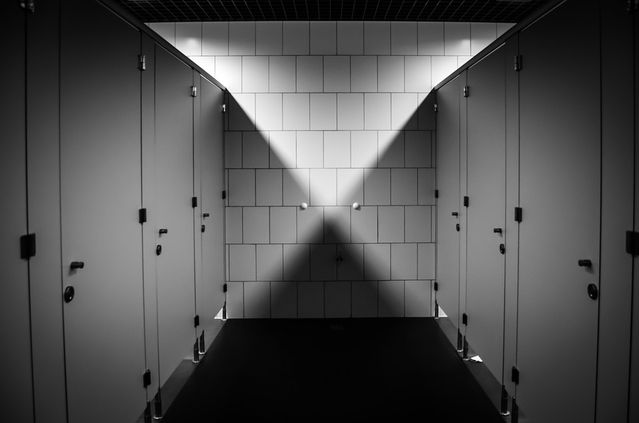 Last summer, I had the worst panic attack of my life.

I was sitting in the outdoor food court of Ponce City Market, a bougie indoor/outdoor mall combo where you can get fifty-dollar pillow shams and pour-over coffee. It was a hellishly hot day in August, we’d just walked halfway down the Beltline, and I’d worn pants instead of shorts. The heat and my insecurity over showing my legs set me on the path to my attack.

My mother-in-law chose the Chinese restaurant in the food court. Only my brother-in-law had eaten in this space before, and he seemed to be the only comfortable one. For my in-laws, both older than seventy, the place was too loud. For my fiance, there were too many people. For me, the table was sticky, the chair poked into my ass and I already felt something gnawing at me.

I was in the beginning stages of starting a blog with my friends. We three are strong-willed women, and at the time I was a jealous of their growing bond together. Their families are close, spend every holiday and special event together and I, despite knowing my best friend for over fifteen years, and despite being the maid of honor at her wedding, felt left out. Annoying. Unwanted. A burden.

I wasn’t a fan of the food, and I ate very little. My in-laws remarked on how quiet I was, how I wasn’t smiling like usual or talking about what normally constitutes dinner conversation in their household—politics, showbiz, writing, music and family.

“I’m just hot, tired,” I said. Both of which were true. But emotions also slammed me as I answered my friends’ texts. One of them suggested we change the format of our posts. The other agreed. The idea made sense. But to the anxious monster in me? It felt like a cut, deep and searing. We were changing the format from what I’d originally suggested. We were all texting so fast that we overlooked some questions and failed to answer others. They were ignoring me, I thought. They didn’t like my ideas.

My eyes filled with tears, and I appreciated the fifteen-dollar white sunglasses shielding my eyes.

“Everything okay?” my fiance asked. He sensed my energy, buzzing and frenetic.

“Yeah, just blog stuff,” I said. The in-laws spoke, critiquing the food and the glasses that came without straws.

Then the meal was over. Everyone asked my mother-in-law where she wanted to go. We agreed to hit the restrooms first, then continue down the Beltline. She rode an electric wheelchair, and as I followed behind her into the crowded and chaotic restroom, I kept my glasses on.

I sat in the stall. I cried as I peed, the kind of silent cry that’s as shameful as it is anguished. I was being such a baby. What was wrong with me?

I finished first, washed my hands and waited in the bathroom hall, where my fiance, his brother and his father stood.

In a moment, my fiance realized that something was amiss. He pulled me to the side.

“Nothing,” I said, only it wasn’t a casual “nothin',” it was “NOTHING”—every syllable pronounced, shrill and anxious.

My mother-in-law rolled out of the restroom smiling, her blue eyes sparkling. My fiance put his arm around me and we walked behind my future family, brother-in-law laughing at my father-in law for saying something awkward a little too loud. I kept my head down because my tears flowed freely.

The heat overwhelmed me. My jeans clung to me like a wet blanket.

Pinpricks broke out all over my body. My heart raced. I couldn’t catch my breath. And still those emotions gnawed at me. I felt like I was slowly being picked apart from the stomach outward.

And my thoughts, how they raced. Some of them were complete thoughts like “You’re so fat you can’t even wear shorts,” “Meg and Jac don’t want you around, that’s why they hang out all the time,” “Your ideas are dogshit, you’ll never be a writer,” “Your hair is so frizzy, why don’t you just keep it straight?” And some were just words like “burden,” “annoying,” “fat,” “ugly,” “untalented.”

We walked back to the car, on the Beltline, the sun beating down on us.

And still, my fiance’s steady arm wrapped around me, my only anchor. “It’s going to be okay,” he whispered. “Just take deep breaths.”

We stopped in front of an antique shop.

My mother-in-law, energized by the electric wheelchair, wanted to keep going. My father-in-law, without a chair or a cane, and baking in the sun, couldn’t press on.

When they all converged and turned to talk about next steps, my mother-in-law heard my crying.

The floodgates opened and I nearly toppled over onto her chair.

“She’s having a panic attack,” my fiance said.

They all took turns hugging me, urging me to breathe. Still my legs trembled. I was so ashamed for this public outburst, and my insides felt like they wanted to be on the outside.

They agreed on a plan. My brother-in-law would go get the car. My mother-in-law and fiance would zip down the Beltline to meet him at Yoforia, because somehow someone decided on frozen yogurt.

My father-in-law grabbed my hand. His hand was soft, full of wrinkles that told of his age, seventy-nine, and his history as a Broadway actor.

We walked through the dusty antique shop and sat on a small wooden bench. As we watched people browse the shop, joking and laughing or searching the store determinedly, my emotional turmoil settled. I texted my friends and told them I their ideas for the format of the blog were great. I told them about my panic attack, and right away they responded with concern.

We left the antique shop then headed to the frozen yogurt place, where my fiance and his family told me their stories of panic attacks or bouts of depression. I felt less alone in that moment. I didn’t feel like a burden, or untalented or any of those things the anxious monster made me feel I was.

At a dinner several weeks later with a group of coworkers turned friends, I told them about this panic attack. Four out of five of them, all women, spoke about their anxiety. Though only one of them had been professionally diagnosed, each of them (myself as well) fell into the 3.1% of the American population that suffers from Generalized Anxiety Disorder, an illness where sufferers experience irritability and nervousness; a sense of impending danger, rapid breath, fatigue, increased heart rate, issues with concentration and more, according to the Anxiety and Depression Association of America (the ADAA).

According to the ADAA, 24% of American women are affected by some type of anxiety disorder, whether Generalized Anxiety, Panic Disorder, Social Anxiety Disorder, Obsessive Compulsive Disorder or phobias compared to only 14% of American men. Across the board for all of these disorders, women are more likely to be sufferers. While listening to my friends describe their battles with anxiety, and while struggling with my own on a daily basis, I began to wonder why. Why are women more likely, in some cases twice as likely, to suffer from anxiety? Is it nature or nurture?

Women seem to have lost the genetic lottery, because our estrogen levels change drastically throughout our lives. Anxiety is a common symptom of some of the most significant changes in a woman’s life: puberty, PMS, post-childbirth, perimenopause and menopause. The drastic changes in hormones cause such physical and mental stress that they trigger our fight or flight response. Sometimes, though, it’s a question of what came first. Changing levels of hormones and chemicals such as serotonin and norepinephrine are known to cause anxiety, but when someone experiences high levels of stress they can develop anxiety, which in turn lowers hormones and serotonin and norepinephrine.

Additionally, women’s propensity for stress can be linked to the amygdala, the almond-shaped cluster of nuclei responsible for making decisions, processing memories and emotional responses like anxiety. The right side of the amygdala, the half responsible for action and negative emotions, tends to be bigger for most males. This explains why most men tend to respond to stressful stimuli with physical action.

For women and those dealing with anxiety and depression, the left side of the amygdala dominates—this part is responsible for recollection of details, particularly those associated with something emotional. If you’ve ever wondered why women ruminate over stressful events and men try to fix them, the amygdala might be to blame.

It’s not just nature that plays a role in our anxiety, but nurture as well. The societal expectations of women also play a role. I read an article once about a woman who sat at a playground and watched other parents interact with their children. The parents who had boys let them charge through the space fearlessly. When their son would hurt himself, the parents encouraged him to dust off and keep playing. When it looked like he might fall, they did little if anything to help, knowing that this would build resilience.

The parents of girls, however, were different. They kept a close watch on their daughters and when it looked like they might fall or hurt themselves, they prevented it from happening. The girls were coddled, treated like something that must be protected. When you’re treated as though you’re vulnerable in a dangerous world, is there any other way to be but anxious? When you face things like workplace harassment, sexism, the expectation of a perfect body and domestic responsibilities on a daily basis, what can you do?

As a woman suffering from anxiety, I don’t know the right answer. I don’t know if it’s a matter of fixing society or fixing or biology. But I do know one thing —

We are the anxious women, and we are not alone.

Women Are Much More Likely To Develop Mental Illness Than Men

Therapy: An App For That

A native Californian, Amanda Weaver now lives and writes in Atlanta. She cares about intersectional feminism, finding the right shade of lipstick, and planning a drama-free wedding. You can find her on Twitter @amaranthamanda obsessing over her novel. Visit her website http://www.amandabweaverwrites.com.

Tags: anxiety , mental health , panic attacks , personal essay
Support Feminist Media!
During these troubling political times, independent feminist media is more vital than ever. If our bold, uncensored reporting on women’s issues is important to you, please consider making a donation of $5, $25, $50, or whatever you can afford, to protect and sustain BUST.com.
Thanks so much—we can’t spell BUST without U.